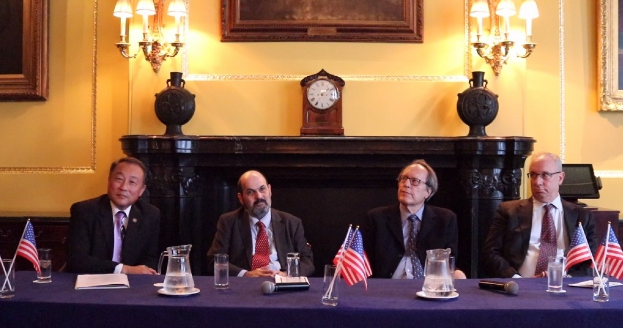 Yue’s appearances were his latest on a global whistle-stop tour of key foreign business centers around the world that aims to rally support among – and ideally as well, the active involvement of – American citizens living abroad for legislative changes in the way their country currently taxes them, in the run-up to the midterm elections in November.
END_OF_DOCUMENT_TOKEN_TO_BE_REPLACED

To accompany his recent paper “Urgent Need for U.S. Citizens Residing Outside the U.S. to be Able to Obtain a Taxpayer Identification Number (‘TIN’) Other Than a Social Security Number” Patrick Martin has made several blog posts about the difficulties faced by U.S. citizen teenagers and adults attempting to obtain Social Security numbers from outside of the United States. I highly recommend the paper & posts to all readers here.

Mr. Martin also states that it is impossible for U.S. citizens to travel to the U.S. without an SSN. On its face, this looks like a reasonable conclusion from the warnings on the U.S. passport application form. State Department officials themselves do not seem to agree; in 2011, they told the Government Accountability Office that they did not believe then-current statutes allowed them to deny passports to SSN-less applicants. Nevertheless, the statutorily-authorised fine imposed in some cases for failure to provide a TIN — enacted to punish the diaspora — may deter U.S. passport applicants who lack SSNs, and a large proportion of such applicants are likely to be U.S. citizens in other countries.

A new bill may make the situation even worse, though it wouldn’t prevent travel to the U.S., “just” departure afterwards. Under Orrin Hatch’s “customs bill” (S. 1269/H.R. 644) which recently passed the Senate, not just people with significant unpaid taxes or tax-form-related fines, but also people who do not provide their SSNs, would be unable to obtain general-validity U.S. passports, only “one-way passports” limited for travel to the United States. This proposal, and others like it, directly resulted from State’s 2011 comments to the GAO. The SSN-related part of the proposal is new, and did not appear in the previous iterations of the proposal in the 2012 highway bill nor veterans’ jobs bills. It is not clear whether it would deny U.S. passports to people who never had SSNs in the first place. I will explore this in a separate post later on.

END_OF_DOCUMENT_TOKEN_TO_BE_REPLACED

This article by Bloomberg is their reporting on the submissions to House Ways and Means Tax reform. It has been mentioned in multiple threads here at Isaac Brock, and was highlighted at ACA, so thought I would pull it out for better visibility.  It merits comments and email to the journalist.  I did send them one to thank them for drawing attention to the U.S. Expat plight, and provided the link back to the anecdotal snippets from other submissions like those @AbusedExpat has been posting.

END_OF_DOCUMENT_TOKEN_TO_BE_REPLACED

Calls for Repeal of FATCA as Part of Tax Reform Framework

ACA: “FATCA is bad law on all fronts and should be repealed.”

In an April 4, 2012, submission to the leadership of the International Tax Reform Working Group and the Financial Services Tax Reform Working Group of the Committee on Ways and Means of the U.S. House of Representatives,American Citizens Abroad (ACA) – the flagship association representing the interests of some seven million Americans residing outside the United States – has again called for repeal of FATCA (“the Foreign Account Tax Compliance Act”) as part of a comprehensive overhaul of the U.S. tax system.   While focusing on the particular damage FATCA does to U.S. citizens living abroad, ACA pulls no punches in spelling out the broader harm this 2010 law (now pending implementation) threatens to inflict on the American economy as a whole, while failing in its stated purpose of curbing offshore tax evasion. END_OF_DOCUMENT_TOKEN_TO_BE_REPLACED

Shadow Raider brought this to our attention in a comment he made on the Ways and Means Committee Highlighting International Apsects of Tax Reform thread today.

“The tax reform working groups of the Ways and Means Committee are discussing tax reform at full speed now, with hearings almost every day (nothing on international aspects yet, other than a hearing about trade with India). The committee announced that it is accepting formal comments from the public until April 15, and that those comments will be included in the final report by the Joint Committee on Taxation on May 6. The committee is even posting the comments on its website as they are sent (the only comment sent to the international group so far is about corporations). If many of us send comments about citizenship-based taxation, FATCA, FBAR etc., the subject should catch their attention.
Instructions:
Any person(s) and/or organization(s) wishing to submit comments can email tax.reform@mail.house.gov.
In the subject line of the email, please indicate “Comments: (name of) Tax Reform Working Group” (in our case, International Tax Reform Working Group).
Attach your submission as a Word document.
In addition to the Word document attachment, please include in the body of the email a contact name, physical address, phone number and email address.“

Thanks to Mark Twain for pointing out this should be prominently featured as a new thread of its own.

Thanks to Shadow Raider for posting this comment on the generalTax/FATCA thread.

“Now that the tax part of the fiscal cliff is over, the Ways and Means committee is highlighting tax reform in its website again, specifically its international aspects. Chairman Dave Camp is also talking about it again. The debate is still focused on corporations, but the discussion draft does say “individual tax reforms to be provided”. There is an email for comments about international tax reform:wmtaxreform@mail.house.gov. I sent my comments last year, I’m thinking about sending my bill draft now, and maybe more of us should send comments too.”

And thanks to Mark Twain for pointing it out as deserving of visibility and discussion on it’s own thread, indicating that,  “This  is a unique chance to engage Ways and Means, which I have not seen previously as an opportunity.”

One of the last acts of the House before they went on summer recess was to pass HR 6169. It has a snowball’s chance in Hell of passing the Senate as currently configured.  It was seen as a partisan political document to campaign on, rather than a realistic attempt at tax reform.  That is how the game is viewed in DC by the political wonks, and in fact it is how it plays out in reality.  However, since it is “game on” time, I like that this gauntlet was thrown down. The title appeals.

It was called “Pathway to Job Creation through a Simpler, Fairer Tax Code Act of 2012”

Here is the text version. It got NO votes from the Dems in the House.  So why do I bring it up?

Take a look at  Section 2, (B) (5) (F) of the legislative language, and you will see the following language that should be of interest to all here:

Here is how the non partisan global publication, Tax News reported it, if you wish to read further.  You can Google search for many partisan opinions if you are interested.

Many of the same arguments can be applied to individuals. If I were Romney I would use the Obama fixation on his TAX returns to argue that TAX REFORM is the most important issue facing the country.

Question: Who would you trust with tax reform? Obama or Romney?

Must see – Dan Mitchell explains why the U.S. must move to territorial taxation for companies – danieljmitchell.wordpress.com/2012/07/20/wha… – Understand the issues