As we’ve discussed previously, U.S. persons who live in countries which do not have totalization agreements with the U.S. face double Social Security taxation if they are self-employed or work for branches (rather than subsidiaries) of U.S. companies. This is because the 26 USC § 901 foreign tax credit applies only to income taxes under Subtitle A, Chapter 1 of the “Internal” Revenue Code, not to SECA or FICA taxes which are imposed by other chapters. Ain’t citizenship-based taxation fun?

On 30 June 2015, the White House announced that Brazil and the United States had signed a Social Security totalization agreement, which in theory would finally end this piece of the double taxation problem that plagued Roger Conklin, markpinetree, and other Isaac Brock Society readers with connections to Brazil:

Later in the same press release, the White House also “welcome[d] the entry into force of the agreement between the United States and Brazil to implement the Foreign Account Tax Compliance Act”, which suggests that their commitment to “eas[ing] the burden on companies” and “enhancing the protection of our workers” is not very deep, but anyway …

I’d forgotten about this agreement, until a recent retweet by USCitizenAbroad prompted me to look it up, and the Social Security Administration says it is not yet in effect. The Brazilian side appears to be moving to ratify it (even though the President who signed it has been removed from office): the executive branch submitted it to the National Congress in July, and it is now under consideration by various committees in the Chamber of Deputies.

On the U.S. side, the administration must submit the agreement to Congress to start the clock running on Congress’ time limit for voting it down — if Congress don’t do so by the deadline, they’re deemed to have approved it. However, Obama shows no sign of actually submitting the agreement, which has already been left hanging for longer than any other new U.S. totalization agreement. Given what a political hot potato the 2004 agreement with Mexico turned out to be for Bush, the Democrats probably don’t want to bring this one up before the election. So it will be left hanging in Washington until after the next president takes office — assuming that whoever gets elected actually wants to honour the agreement.

The U.S. government can’t even be bothered to tell the public what the agreement says — for that you’ll have to turn to the Brazilian government, which posted the full text on the same day as they signed it.

How much longer is the U.S. government going to make U.S. Persons in Brazil wait?

END_OF_DOCUMENT_TOKEN_TO_BE_REPLACED

To accompany his recent paper “Urgent Need for U.S. Citizens Residing Outside the U.S. to be Able to Obtain a Taxpayer Identification Number (‘TIN’) Other Than a Social Security Number” Patrick Martin has made several blog posts about the difficulties faced by U.S. citizen teenagers and adults attempting to obtain Social Security numbers from outside of the United States. I highly recommend the paper & posts to all readers here.

Mr. Martin also states that it is impossible for U.S. citizens to travel to the U.S. without an SSN. On its face, this looks like a reasonable conclusion from the warnings on the U.S. passport application form. State Department officials themselves do not seem to agree; in 2011, they told the Government Accountability Office that they did not believe then-current statutes allowed them to deny passports to SSN-less applicants. Nevertheless, the statutorily-authorised fine imposed in some cases for failure to provide a TIN — enacted to punish the diaspora — may deter U.S. passport applicants who lack SSNs, and a large proportion of such applicants are likely to be U.S. citizens in other countries.

A new bill may make the situation even worse, though it wouldn’t prevent travel to the U.S., “just” departure afterwards. Under Orrin Hatch’s “customs bill” (S. 1269/H.R. 644) which recently passed the Senate, not just people with significant unpaid taxes or tax-form-related fines, but also people who do not provide their SSNs, would be unable to obtain general-validity U.S. passports, only “one-way passports” limited for travel to the United States. This proposal, and others like it, directly resulted from State’s 2011 comments to the GAO. The SSN-related part of the proposal is new, and did not appear in the previous iterations of the proposal in the 2012 highway bill nor veterans’ jobs bills. It is not clear whether it would deny U.S. passports to people who never had SSNs in the first place. I will explore this in a separate post later on.

END_OF_DOCUMENT_TOKEN_TO_BE_REPLACED 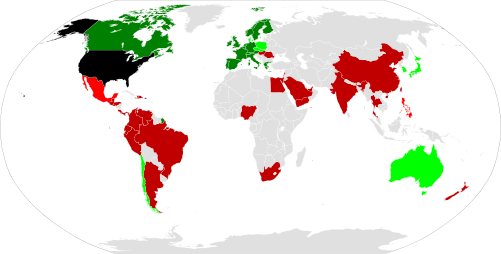 END_OF_DOCUMENT_TOKEN_TO_BE_REPLACED

Essay by Mike Kaiser of Toronto on his efforts to get a Social Security number, a prerequist for filing US income tax. (Spoiler alert: it required six separate trips to the US.)

A recent poll conducted jointly by the Associated Press and GfK Custom Research finds that 53% of Homelanders are in favour of raising taxes and raising the retirement age in an attempt to save Social Security, against 35% who would prefer cutting benefits. There was a big split along partisan lines, with 65% of Democrats and 53% of independents agreeing with higher taxes, against 38% of Republicans.

GfK conducted the poll in English and Spanish in an effort to be inclusive, but of course there’s one demographic group they didn’t bother to survey: U.S. Persons abroad — this despite the fact that many are subject to FICA taxes.
END_OF_DOCUMENT_TOKEN_TO_BE_REPLACED