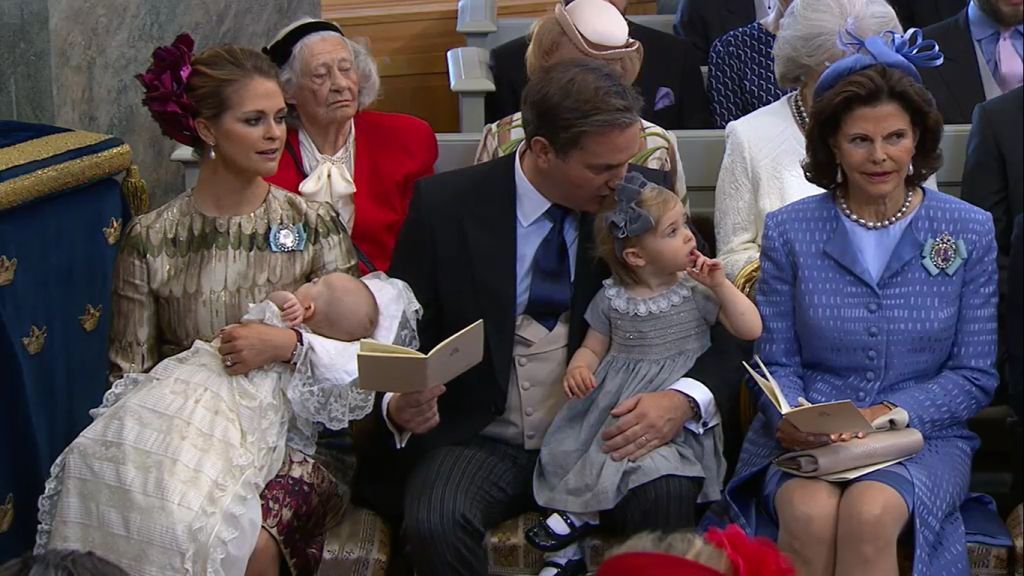 Children born in America or to an American parent are automatically Americans, and will be forever required to file US taxes — regardless that they  reside in Sweden and regardless of having no financial activity in America. American and dual children in Sweden are required to yearly report their own Swedish bank accounts to the U.S. Financial Crimes Enforcement Network (explained below)

SWeden pays 73,700 USD per each resident adult US-citizen immigrant to be located with the #FATCA ethnic-identification system. Is Sweden offshore? (I had always thought that Sweden was on the continent of Europe). (Total FATCA implementation costs in Sweden are estimated to be greater than 7.61 billion SEK.)

Would it be at all possible to dispel any myth that residents in USA are sending their money to SWeden to avoid taxation? Has no one in Washington or Stockholm yet realized that SWeden has the highest personal tax rate in the world?

FATCA, the Foreign Account Tax Compliance Act, is an enforcement tool of the requirements of Americans to report their “foreign” bank accounts. Since US has extraterritorial taxation based upon citizenship, these reports are required of all US citizens and all US persons living throughout the world or in Sweden.  “Foreign” and “offshore” are defined as anything that is not in American. Canada is “offshore’ and, Mexico is “offshore”, and the Swedish accounts of a dual citizen living in Sweden are also considered both “offshore” and “foreign” according to the IRS and its captive media. US persons are required to fill out the Foreign Bank Account Report FBAR at the U.S. Financial Crimes Enforcement Network (FinCen). Those that have not filed FBARs are eligible for jail terms, or fines reaching 300% of a persons asset value.  A child is responsible for filing its own FBAR and is not exempted from the penalties.  FBARs are required to be filed electronically at the FinCen website. Additionally, qualified “rich” US persons (those with over $200,000) are required to have also filed IRS form 8938, with an additional penalty structure.

The Swedish government administration stated that the costs of implementation should be considered versus the threatened 30% sanctioned tax which could be applied for non-compliance.

Sweden could not estimate the business effect of FATCA, despite that Swedish law requires that the business impact must be evaluated for legislations. In following discussions, it was estimated that each small financial institute (comprising 95% of the FFI’s) would incur 1 million SEK yearly FATCA administration costs. (Documentation of the costs to larger institutions has not been located.) IRS lists 744 FFI’s to date, yielding a minimum estimated yearly cost of 744 million SEK (excludes the cost of the 5% larger institutions), or 7.44 billion SEK over 10 years. The costs to the Swedish government were estimated to be above 15 million SEK for implementation and 15 million SEK per year thereafter, for a 10 year public cost of 165 million SEK. Total FATCA implementation costs in Sweden are estimated to be greater than 7.61 billion SEK.

As Sweden approaches a cashless society, nearly every resident has a bank account, yet only the 82.9% over 15 yrs old are considered further in this analysis.

Using the 6-yr average of IRS exchange rates (7.33 SEK/USD), this yields the cost of 73,700 USD to locate each adult resident US-person account.

Would it not have been better for Sweden to just hand over 761 million SEK to USA each year—as a tax for having allowed immigration and emigration with USA?

But, FATCA is about finding rich offshore tax evaders! They are sending their money to Sweden—in order to avoid taxation! Believe it! Believe it! You should be believing all of the FATCA “offshore” media propoganda for Sweden. They are not paying their fair share! We need to get every last PESO out of them!

Who are they actually going to find? The objective is to find all suspected U.S. persons living in Sweden and any suspected Swedes living in USA.

They may also find about 51,000 SWedish-citizen schmucks living in The Land of the Free as expats. I suppose that Obama wants to find them, too. There ought to be a few of those pesky buggers with checking accounts back in Du gamla du Fria, due to their devious history of once having lived someplace other than America. They might have inherited something from grandma, have a summer house, or might even be renting out their Swedish family home in their absence. Somehow, these terrible immigrants in America need to be located and punished for their sins.

FATCA looks for “indicia” of these pesky U.S. persons. 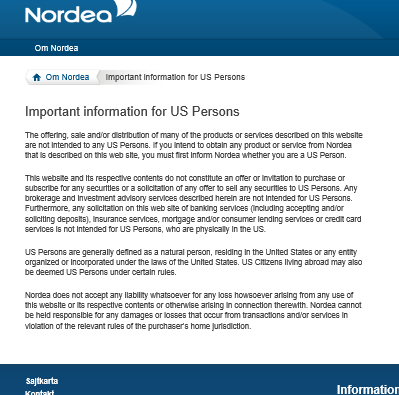 A major bank disallows certain US citizens residing in Sweden 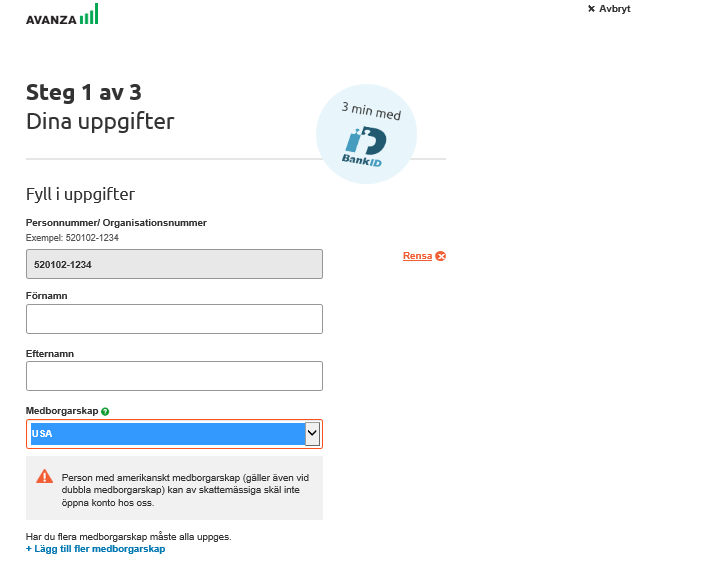 Some of the “Real Swedes” who have no dual citizenship believe (even though they are paying out the whazoo) that this doesn’t affect them. But, if those “Real Swedes” try to open a new bank account, they have a choice of filling out a checkbox on a form that states either  “I am a U.S. Person for tax purposes” or “I am not a U.S. person”. If said “Real Swede” refuses to answer, said Swede is not allowed to open a bank account in Sweden.

It’s possible that some of the costs had been pooh-poohed as having synergies with the coming OECD program Common Reporting Standard, where ALL minorities in Sweden will be required to declare their country of birth, city of birth, and other passports to their banks. As this program comes on line in Sweden, ALL minorities will be mapped out for selective treatment.

Sweden also believes that it is going to get reciprocal information from USA, which ought to be worth a few kronor? Yeah, right, Sweden already started delivering up its data last year, and it is still waiting for that reciprocal data, as described in its IGA  (FATCA Intergovernmental Agreement) “The Government of the United States acknowledges the need to achieve equivalent levels of reciprocal automatic information exchange with Sweden. The Government of the United States is committed to further improve transparency and enhance the exchange relationship with Sweden by pursuing the adoption of regulations and advocating and supporting relevant legislation to achieve such equivalent levels of reciprocal automatic information exchange.” Dear Sweden, other than the “r”, what part of “total bullshirt” don’t you understand?

Every year that Sweden performs its discrimination and waits for reciprocity, Sweden pays 744 million SEK in compliance costs .

So, what is it that America is after? Tax money? That’s ridiculous. Even with America’s ludicrous double-tax-filing requirement in extraterritorial Citizenship-Based-Taxation, USA cannot squeeze tax money out of any US-person Swedish citizens residing in Sweden. America’s taxation concept is to “tax-up” its citizens to the higher of the local (Swedish) tax rate or the Homeland tax rate. In all cases, the Swedish tax rate is highest—even unemployment and parental and other social payments, and pensions are already taxed highest by Sweden.

The only potential gain for US is to claim tax-treaty superiority of passive income (interest & dividends), forcing such Swedish-resident dual citizens is to first pay passive income tax to USA and to attempt to credit those tax payments to their own tax authority skatteverket. In other times, this might have succeeded to draw tax revenue away from the Swedish Skatteverket and over to the IRS. However, today’s interest rates are near or below zero. Another potential gain for US might be to collect additional tax from dual citizens who might have won one of the pre-taxed government lotteries. In this case, Sweden will pre-tax the dual-citizen winner, and USA will collect additional taxation afterwards.

So the entire American government is bullying up on you, and the entire Swedish government is bullying up on you. So, turn to the leader of the bullies, the European Union? The leader of the EU bullies answers “it’s ok to discriminate, as long as the discrimination is for commercial reasons”.  Do you think the media will help? The media will tell you to go back and do what the bullies want. Should you ask for help from your ambassador? The ambassador will bully you some more.  Well, the best way to handle a racist bully is to run –to get away from the bully and to renounce citizenship.  Some of the victims of this bullying are CHILDREN. Children cannot run or lose their US citizenhp. Others have other family reasons that disallow them from running. So, what do you do if you’ve tried everything but you just don’t know how to get rid of that bully?

What does a person do when the bullies have put a  $73,700 price on his head?   Well, FATCA racial discrimination has hit its target. In Sweden, we lost one of our best Swedish Americans. We lost him to FATCA. FATCA took his life. He had no other route to get away from the Swedish government and the US government. The Swedish media and the US media chastized him. He was surrounded by organized racist, government mobs. Because of FATCA, one of the best dual citizens decided to take his own life.

Meanwhile, the FATCA “tax evaders” “1%’ers” , “Ex-Patriot“, and all other government-sponsored and media-implemented propoganda continues, in the name of more money for the deficit governments of the world. Discrimination has been justified in the name of taxation propoganda.

We are standing up to these bullies. The bullies are sitting behind the glass. When will the world realize that these banks and these governments and their captive media are just a bunch of bullies? Does the each person in the world need to become the next object of bullying before they realize the problem?