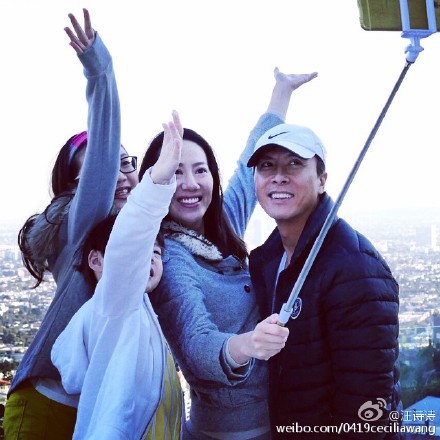 While nasty and vindictive Homelanders were expressing glee at the news that Roger Ver had been denied a U.S. visa to speak at a Bitcoin conference in the U.S., another covered expatriate was able to celebrate a much quieter Christmas and New Year’s holiday in Southern California with his Canadian wife. A recent article in Hong Kong’s Headline News confirms that Hong Kong actor Donnie Yen Chi-tan recently visited the U.S. and Peru with his family. His wife Cecilia Wang posted a picture of herself, Yen, and the kids in Los Angeles just after the New Year on Chinese microblogging service Sina Weibo. As far as is known, Yen himself — unlike his wife — holds only a Hong Kong SAR passport and not a Canadian passport, meaning he does not enjoy visa-free entry but instead had to apply for an actual U.S. visa to enter the country.

Yen is an “accidental American” of a different sort: he was not born a dual citizen, but instead came to the U.S. with his family at age 11. However, he moved back to Hong Kong pretty much as soon as he reached adulthood, and achieved fame in the movie industry there through his roles in martial arts films. He renounced U.S. citizenship in 2009, and showed up in the Federal Register “published expatriates” list for Q3 2010; as he stated to Xinhua News Agency when they interviewed him a few years later about his renunciation, “now I’m 100% Chinese”. This was not Yen’s first visit to the U.S. since his renunciation, either; in July 2014, he went to Boston where his parents still live. Having U.S. citizen or resident relatives makes it more difficult to overcome the presumption of immigrant intent when applying for a tourist visa, but as Yen’s case demonstrates it is far from impossible either.

Even though politicians on both sides of the aisle keep threatening to banish us, many other ex-U.S. Persons both famous and obscure have had no issues in obtaining a U.S. tourist visa or entering through the Visa Waiver Program. Some have even moved back to the country, either on work visas or green cards. Unfortunately, even the mere threat of being denied entry to the U.S. to visit friends and relatives has left some U.S. Persons in other countries too afraid to cast off their unwanted citizenship.

Like Loading...
« Survey to Abolish FATCA: To be Presented to Congress
Amanda Klekowski von Koppenfels, Ph.D. releases results of her University of Kent study / survey… »