Commentary:  In years circa 2009-2011, Barrie Mckenna of the Globe & Mail and other writers in major Canadian newspapers reported that the Overseas Voluntary Disclosure Programs were going to end and that people better hurry up if they want to “come clean”. Here is an example of the scaremongering that took place: 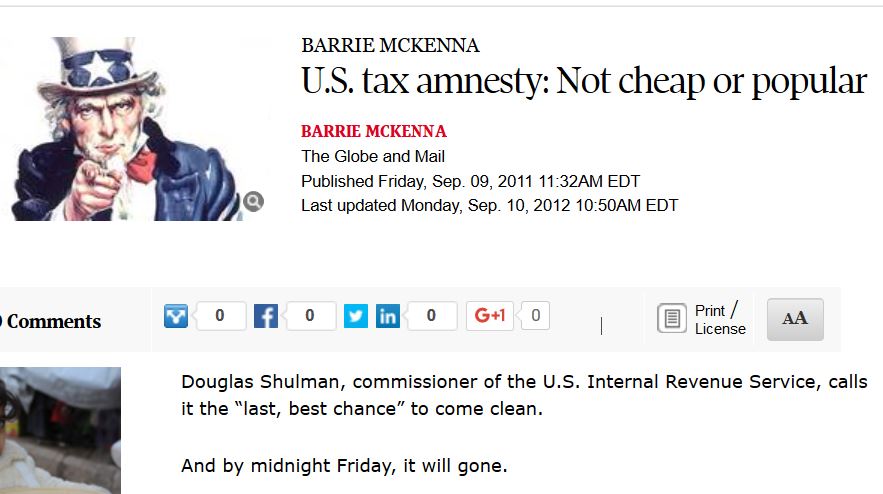 This article was full of advice and inaccuracies, such as this:

The thorny issue for Americans in Canada is that many assumed they had renounced their U.S. citizenship – along with any obligations to the IRS – when they became Canadian.

That isn’t the case. Americans remain Americans until they formally renounce their citizenship – a process that, like the amnesty, requires full disclosure to the IRS.

McKenna was completely wrong on this point, and the Globe & Mail has not corrected it after almost 5 years. Many if not most people who became Canadian before 1986 in fact had relinquished their US citizenship and no formal renunciation was necessary. And before a few months ago, they could have even obtained a free CLN from the US Consulate. Unfortunately, the US is now charging $2350 for a CLN.

The result of articles like McKenna’s is that many people (some whom we know here at Brock) rushed into the OVDP programs and spent the next few years in living hell. At Isaac Brock we began early on to warn people about the OVDP programs.

Taking one’s time to make decisions with regard to the sudden and unreasonable demands of a foreign government is good idea, especially if that government hasn’t brought an army to lay siege at the walls of your city.

My suggestion is to read all the posts on the side bar of this website. Go to a John Richardson seminar. Make sure that you are in fact a US citizen and are supposed to be taxpayer (according to US law that is), and take your time to weigh all of your options, including the option of doing nothing at all. Inform yourself before seeking out a cross-border tax preparation expert (if you even need one), so that they are unable to fill you with unreasonable fears.

I had the experience of filing my US 2010 taxes nearly a year late. I was not fined. I cannot guarantee that others will not be fined for late filing, but the IRS seems more lenient about time delays when you are a taxpayer abroad. Many others filed belated FBARs (in keeping with the instruction of filing them late with an explanation of why they were not failed–the very instructions that the IRS was giving). To my knowledge, not one of these folks has received a fine for late filing. You have time. Do your due diligence, and you could save yourself years of pain.

And frankly, if you’ve lived abroad for decades without paying attention to the US filing obligations, why would there be any rush to do something now?

Previous Petros Principles:
(1) What the IRS can’t know unless you tell them can’t hurt you.
(2) Fear makes the IRS more dangerous than it really is.