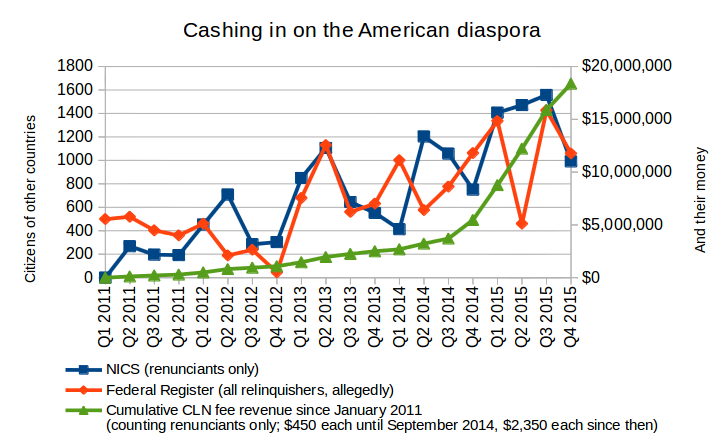 I count 1,058 names in the latest Quarterly Publication of Individuals Who Gave Us At Least $2,350, which has just been placed on public inspection for printing in the Federal Register next Monday, a mere nine days later than required by law. Meanwhile, the FBI, which also tracks American emigrants who renounce citizenship (but not those who relinquish in other ways) for the National Instant Criminal Background Check System (NICS), says that NICS had 27,240 renunciant records on 31 December 2014, and 32,666 renunciant records a year later, for an increase of 5,426 during the year 2015, and another 253 in January. Only 4,279 names showed up in the Federal Register in the same period, meaning that the IRS missed more than eleven hundred of us at minimum.

Last year was the first full year in which the $2,350 fee — the world’s highest fee — was in effect, and Q4 2015 is the first full quarter in which not just renunciants but all relinquishers were charged that fee for exercising the human right to change their nationality. Clearly the American diaspora is wildly enthusiastic about State’s efforts to protect that right, and that’s helped make it a record year for State Department fee revenue: at least US$12,908,550!  (That figure, and the chart above, only includes revenue from renunciants listed in NICS; I haven’t tried to estimate how many non-renunciant relinquishers there might be, though our earlier analysis suggests they might be only slightly less numerous than renunciants.)

More than two-thirds of that revenue is attributable to people giving up citizenship within the past year — that’s an amount nearly 50% bigger than State’s entire 2015 budget request for American Citizen Services. (Keep in mind that all the fees went to State, rather than the IRS who actually do the hard work of compiling the list by copying the names from the CLNs which State sends them into a spreadsheet and deleting a bunch for kicks and giggles or something.)

The IRS’ Federal Register list is far from the only illegally-late government report these days. For example, under 19 USC § 2432(b) (part of the hilariously hypocritical Jackson-Vanik Amendment), the State Department is required to give Congress “information as to the nature and implementation of emigration laws and policies and restrictions or discrimination applied to or against persons wishing to emigrate”, so that Congress can confirm whether the President is correctly exercising his obligation to sanction countries which “impose[] more than a nominal tax on emigration or on the visas or other documents required for emigration, for any purpose or cause whatsoever”. However, State’s report on the emigration policies of Azerbaijan, Kazakhstan, Tajikistan, and Uzbekistan was around two weeks late, according to the Congressional Record — it was supposed to have been submitted to Congress by the end of last year.

The IRS list is not only late, but incomplete as well. It’s supposed to include not just the renunciants who show up in NICS, but people relinquishing citizenship under any provision of 8 USC § 1481. Yet, for the fourth year in a row, NICS added a bigger number of names than the IRS printed in the Federal Register. (And that’s not even mentioning the nearly 20,000 people per year who turn in their green cards, some of whom are also supposed to show up in the Federal Register list.) This discrepancy has led observers such as international tax lawyer Andrew Mitchel to conclude that the IRS list is “missing a significant number of names”. (See here for our earlier discussion of various theories about the list, such as the claim that it’s only supposed to include covered expatriates.)

In total, since then-Secretary of State and current presidential candidate Hillary Clinton first authorised the imposition of a $450 fee on renunciants back in 2010, they’ve collected more than $18 million from people who don’t want to be Americans any longer.

Here’s a table of seventeen people mentioned by name in media reports as having given up U.S. citizenship since the beginning of 2014; nine of their names have not yet appeared in the Federal Register (four out of eleven from 2014, and five out of six from 2015). I’ve also included one person who posted his own CLN on Twitter and later showed up in the list (I haven’t included people who tweeted their own CLNs but didn’t show up in the list). Oddly enough, not a single one of these showed up in the Q4 2015 list. Maybe I’m just missing some media reports of famous people who gave up citizenship and did show in the revenue list; if you know of any others, please leave a comment. In any case, a non-publication rate of more than one-third for 2014 is still pretty bad.

For earlier reports (including the date, if any, in which those people showed up in the Federal Register), see Wikipedia’s list of former United States citizens who relinquished their nationality, though note that it only includes people who have Wikipedia articles. (I’ve seen two media reports of people without Wikipedia articles giving up U.S. citizenship in 2013: Kim Young-keun, who according to the Dong-A Ilbo renounced to take a position in the Overseas Korean Foundation under South Korea’s Ministry of Foreign Affairs, and showed up in the Q3 2013 list; and Michael Putman, interviewed for this BBC article, who finally showed up in last quarter’s list.)

The below table lists the monthly additions to NICS for 2011–2015, compared with the quarterly lists in the Federal Register. The FBI has the bad habit of uploading the new NICS report each month at the same URL as the old one; the only way to keep a verifiable collection of old reports is to save old ones in the Internet Archive each month, and unfortunately we didn’t remember to do this for all months. If the month is set in upright type, the link goes to an actual Internet Archive copy of the FBI NICS report for that month. If the month is in bold type (for December), the link goes to the NICS annual operations report for the appropriate year. Finally, for months in italics, the link goes to a Brock post or comment.

A few caveats. The “addition” figure for April 2011 refers to all additions since December 2010. The “addition” figure for October 2012 includes what the FBI described as a “backlog” of 2,900 renunciant records, also included in the annual total for that year. I also gave an estimate of what the annual total would be without the backlog, even though some of the backlog may relate to other periods covered by the chart.

The Department of State is collectively charging us millions of dollars to exercise our human right to change our nationality, while the “Internal” Revenue Service refuses to compile an honest list of our names as required by their own laws. Meanwhile, the Department of “Justice” continues to seethe about U.S. persons “concealing foreign accounts and evading their U.S. tax obligations” and threatens that “[t]hose who underestimate the ability of the United States to pursue offshore tax evasion do so at their own peril”.

With this kind of attitude from the U.S. government, expect the ten-month consular wait list for renunciation appointments to get even longer.

Like Loading...
« Getting Canadian Charter of Rights and Freedoms Right
Perhaps After Reading This You Could Suggest a Title for This Post: A FATCA Related Suicide Part I »

34 thoughts on “Nearly $13 million in renunciation fees last year, and they can’t even compile a simple list of our names”