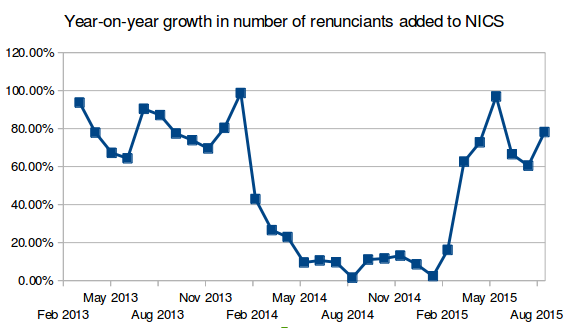 The latest NICS report shows a new total of 31,525 records in the “Renounced U.S. citizenship” category. That’s an increase of 552 since last month, and 4,285 since the beginning of the year. (Using the old ratio of four or five non-renunciant relinquishers for every six 8 USC § 1481(a)(5) renunciants, that suggests a total of around 800 to 900 people giving up U.S. citizenship by any means last month, and 7,000 to 8,000 since the beginning of the year).

It’s now been nearly one full year since the State Department started charging American emigrants twenty times the fee in any other developed country in order to exercise the human right to change their nationality. In a recent Federal Register notice (discussed by the Wall Street Journal, and also in comments here at Brock), State finally deigned to respond to all the objections to the cash grab: they claimed that this sudden change was necessary to comply fully with the laws on renunciation, despite the fact that the relevant statutes haven’t changed in over a quarter of a century and the most recent development in case law consisted of a rebuke to the State Department for arbitrary and capricious refusal to recognise a relinquishment. They also further asserted that the fee hike demonstrated their commitment to protecting human rights.

Four comments asserted that the renunciation should be made more efficient rather than more costly. A few asked if there were ways to reduce bureaucracy and paperwork to lower the cost of the service. Specifically, one commenter pointed to the German renunciation process, which involves an online application, mailed certified copies of certain documents, and no in-person interviews. As described above, certain legal requirements exist in the U.S. system, unique to our laws and jurisprudence, to protect both the integrity of the process and the rights of those renouncing. The renunciation process involves significant safeguards to ensure that the renunciant is a U.S. national, fully understands the serious consequences of renunciation, and seeks to renounce voluntarily and intentionally. In short, the comprehensive process of expatriation under U.S. law does not impinge, but rather protects, the right of expatriation.

In contrast, as you can see from the chart above, in the months preceding the fee hike, growth in the number of renunciants had leveled off. Clearly, someone in the State Department saw those flagging numbers and decided to take decisive action to ensure continued growth. And it worked: American emigrants are so enthusiastic about Washington’s newfound respect for protecting human rights that they have decided to start exercising those rights in greater numbers, before Washington starts to get any more “protective” — a successful marketing campaign for Articles 13 and 15 of the Universal Declaration of Human Rights, rebutting earlier claims that they didn’t respect it!

Other possible reasons for recent growth

On the other hand, growth didn’t really start picking up until a few months after the fee hike. That might just be due to State’s delay in forwarding CLNs to the FBI for inclusion in NICS. But that was also roughly when most banks started sending out FATCA letters threatening dire consequences if customers with U.S. indicia failed to fill out a W-9. Those recipients no doubt included “practicing” dual citizens who were unaware of their tax obligations and decided to end their dual citizenship in response to their newfound knowledge.

Many others, however, no longer even had U.S. citizenship in the first place, as they’d relinquished it long ago. Among the latter group, some were scared into approaching a U.S. consulate to clarify the situation, where they learned that the U.S. government had tightened up its standards (e.g. in this February 2015 Foreign Affairs Manual update), and so they no longer met the burden of proof for the U.S. government to issue them CLNs for those earlier relinquishments. Some were thus misled into voiding their relinquishments and declaring that they’d remained U.S. persons in order that they could renounce and get a CLN.

So what’s your take? Which had a greater stimulus effect on the number of renunciations: the September 2014 fee hike, the February 2015 FAM update on relinquishments, or the FATCA letters?

Like Loading...
« How will *US-deemed US Persons* in Canada vote on October 19th? There is now an ADCS-ADSC reply from the NDP Party to compare to the reply from the Liberal Party…
Ted Kennedy & Alan Simpson’s lies about the 1994 ban on U.S. citizens using non-U.S. passports to leave the U.S. »