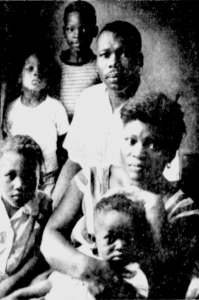 The Door is Locked: Cripple wants to give up citizenship

By Howard Van Smith, Reporter of the Miami News

A crippled South Dade man who served the United States as a soldier in Korea wants to renounce his American citizenship. The usually coveted role of U.S. citizen, as far as Cleveland Ferguson can see, has brought him nothing but misfortune. But his efforts to give it up have produced only a collection of form letters.

Ferguson, 31, a Negro, came to this country from the tiny settlement of Colonial Hill, Crooked Island, The Bahamas. He lives now with his family at 576 NW 15th Street in Florida City.

The British Government, through its consulate in Miami, has assured Ferguson of assistance if he returns to his original status as a subject of the Queen. The U.S. government, however, will only permit him to renounce his citizenship if he is outside the country.

There is one way Mr. Ferguson could have renounced: Immigration and Nationality Act § 349(a)(6), codified at 8 USC § 1481(a)(6), states that “making in the United States a formal written renunciation of nationality in such form as may be prescribed by, and before such officer as may be designated by, the Attorney General, whenever the United States shall be in a state of war and the Attorney General shall approve such renunciation as not contrary to the interests of national defense” is one of the acts by which a U.S. citizen may lose citizenship. This law, as you may remember, was first enacted as part of an effort to force Japanese Americans interned during World War II to renounce U.S. citizenship so they could be deported to Japan.

Note that this article about Mr. Ferguson was written in August 1962. John F. Kennedy had sent U.S. troops to Vietnam by that point — indeed, they had already suffered 25 deaths by the end of the previous year, and early that year saw their first major battle during Operation Chopper. The executive branch nevertheless tried to claim that “for purposes of current section 349(a)(7), the United States has not been in a state war during the period of the Viet Nam hostilities”. But if Mr. Ferguson had been able to afford his day in court, he might have won early recognition of the fact finally recognised by a court in 2010: that no formal declaration of war is necessary to allow renunciations under that provision (now renumbered to § 349(a)(6)), as long as there exist hostilities. (This of course is one of the reasons why the Department of Justice encouraged the Gang of Eight to add language to the immigration reform bill repealing that paragraph — they were terrified of someone higher than a District Court judge getting a chance to opine on the meaning of “state of war”.)

And Ferguson, paralyzed and penniless, cannot pay his fare home.

Ferguson told his story yesterday in the precise English of the Bahamian — and documented it with dozens of letters and forms accumulated over a period of years.

When the Communist North Korean government poured into South Korea in 1950, Ferguson was helping to build the Redland golf course near Homestead. He and his father had come here two years earlier from Crooked Island to look for work. Although he was a British subject, Ferguson was drafted and landed in Korea.

The injury, he said, resulted from some horseplay. Another soldier pushed him, and he fell backward over a footlocker. Ferguson said his back bothered him, but he continued to drive a truck. After his discharge, he returned to the golf course, where his employers described him as a good worker. He did not receive a disability pension.

“I went to the Veterans Administration,” Ferguson said. “I didn’t want to become an American citizen, but I was told I could never get any help unless I did“.

Ferguson signed the application for citizenship in 1955. The back was a continuing problem. He tried and was forced to give up jobs with a construction company and a woodcutting factory.

As usual, the U.S. ignores the problems of existing veterans in favour of figuring out how to create more veterans with more problems. It’s also curious to note that even as far back as five decades ago, we see refutation of the arrogant and shallow idea that everyone wants U.S. citizenship. This foreshadowed a present day trend: other countries are seeing rising naturalisation rates among their immigrants, while the U.S.’ naturalisation rate falls.

A maintenance company at Tamiami Airport employed him. When it became impossible for him to do his work there, he said he went back to the VA Hospital in Coral Gables.

The doctors, said Ferguson, gave him a spinal injection. He fainted on the way out of the hospital. From then on, he said, his condition quickly grew worse. By April 1959 — when he was readmitted to the hospital — Ferguson said he could no longer turn his head or bend his back.

The Veterans Administration kept him for six months and then released him. Ferguson says the doctors told him to go back to work. VA officials, although remembering that Ferguson was a patient, said they couldn’t verify his condition at that time because records had been sent to a regional office.

Ferguson, reduced to babysitting with his own children, wrote to every possible source of aid: to President Eisenhower and, after the election, to President Kennedy and Attorney General Robert Kennedy; to the VA and the Pentagon; to the U.S. Immigration Service and to British officials.

The form letters from U.S. sources all add up to the same thing: Nothing can be done. It’s impossible to renounce U.S. citizenship in this country. If he wants to do that, he must go to a U.S. consulate abroad.

So, the U.S. government should have been well-informed about the kind of person who actually wants to give up citizenship, seeing as Mr. Ferguson wrote to two prominent members of its ruling family. And what was the result, four years later? The Foreign Investors Tax Act, HR 13103 in the 89th Congress — containing the United States’ very first tax aimed at deterring renunciation of citizenship. As Wilbur Mills (D-AR) proclaimed (at page 13297 of the Congressional Record for 15 June 1966):

The bill also provides an amendment which establishes special tax treatment for U.S. who expatriate in order to avoid U.S. taxes. Your committee considers such an amendment necessary since — although there are undoubtedly few Americans who would avail themselves of such a maneuver — but for this provision the bill does make such a scheme more advantageous. Therefore, we wish to foreclose the possibility that this bill would serve as an encouragement to such people. Generally, the expatriation provisions of this bill provide that U.S. source income and the effectively connected income of a citizen received within 5 years after expatriation is to be taxed at the regular U.S. tax rates if the principal purpose of the expatriation was the avoidance of U.S. taxes …

In conclusion, I would like to reiterate that this bill was primarily designed to provide equitable tax treatment for non-resident aliens and foreign corporations, treating them generally on a basis which is consistent with the tax treatment of American citizens and domestic corporations. It is believed that this more equitable treatment will, to some extent, encourage foreigners to invest in the United States …

Apparently Mills saw no contradiction at all between the idea that his bill would provide “equitable treatment” for foreigners and the fact that the sweetheart rates designed to suck capital out of other countries into the black-hole secrecy of the U.S. banking system would be an incentive to Homelanders whose income came mostly from capital to renounce as well. As a kludge to fix this problem, he advocated a system which would punish all people judged to be changing their citizenship for tax reasons, no matter where their domicile or source of income might be. The Senate Finance Committee even thought these provisions were insufficiently harsh and lengthened the period of taxation from five to ten years.

And of course, in a few short decades the idea that the IRS should examine each individual case and come to a conclusion about tax motivations fell by the wayside, and instead after repeated efforts in the early 2000s a new threshold system was legislated which made a “covered expatriate” out of anyone who had lucky timing when buying a house in his or her new country, or anyone who had accidentally missed one of the IRS’ endless forms in the past five years.

The British vice consul in Miami, A. P. M. Barber, wrote Ferguson a long, warm letter of advice. But his suggestion that Ferguson give up his U.S. citizenship here and accept voluntary deportation to the Bahamas proved unworkable because of the American regulations.

“I do not like to say this, but the British are much nicer to colored than Americans,” said Ferguson. “They understand we are people, too, not to be left helpless and die. You can’t understand it unless you are a Negro and live here, and also under the British. The people there (in the Bahamas) will help.”

Ferguson and his wife, Clayomie, do receive $81 a month from the State of Florida for the care of their four children: Prince George, 6; Velma, 5; Gregory, 3; and Dennis, 2. But Ferguson said they are so deeply in debt that they cannot possibly get together the money to take the family home.

In the end it’s not clear whether this story had a happy ending or a sad one. All I’ve come up with by Googling the names of his relations are false or inconclusive leads: some social network profiles for an unrelated man named Gregory living in Freeport; a woman named Velma who runs an award-winning bed-and-breakfast in Nassau but turns out to be a bit too old, a Cleveland III still living in the Florida area as well whose genealogy certainly doesn’t match, and a Clayomie who filed a U.S. patent ten years ago for a child restraining device.

Like Loading...
« US – Sri Lankans “Asked” to Register with their Banks — What if they don’t do so voluntarily?
Is Actor Johnny Revilla Stateless? »

6 thoughts on “Before Sir John Marks Templeton, there was Cleveland Ferguson”