More than 3,400 Pakistanis have renounced citizenship in the past five years, which the Express Tribune describes as a “worrying sign”:

More than 3,400 Pakistani citizens have renounced their nationality in the last five years after adopting the citizenship of other countries while another 1,500 want to give up their association with the homeland. Around 251 Pakistanis have adopted the nationality of Canada, 171 of the United States, 145 of Australia, 121 of New Zealand, 75 of Norway while 54 chose to become citizens of Denmark. The rest went for the citizenship of other countries in Europe and the Middle East, immigration officials told The Express Tribune.

As the article goes on to point out, Pakistan allows dual citizenship with a variety of countries in Europe, North America, and the Middle East, meaning that those emigrants could have retained their Pakistani citizenship, but instead explicitly rejected that choice. In doing so, they voluntarily gave up a variety of benefits which the Pakistani government offers to its citizens abroad, such as evacuation from war-torn Yemen — a “benefit of citizenship” which the U.S. has not seen fit to extend to its own diaspora (contrary to all the Homelander myths about black helicopters coming to rescue us wherever on Earth we might go).

According to recent estimates, the Pakistani diaspora is about the same size as the American diaspora: each comprises seven million citizens living outside of their respective countries. But the number of Americans who have given up their citizenship in the past half-decade is at least in the low five digits.

END_OF_DOCUMENT_TOKEN_TO_BE_REPLACED

Salman Nouman (Twitter: @ImFilmmaker), a U.S. citizen based in Dubai, recently tried to apply for a student visa to attend film school in Bollywood, only to find that the Indian government does not permit naturalised U.S. citizens of Pakistani origin to apply for Indian visas on their U.S. passports. In an Outlook India article about his experience, he mentions the reaction of the U.S. government when he asked them for help dealing with his problem:

After working through the maze of departments within the DOS, I was finally routed to the American Citizen Services and India Desk. They asked me to email them the details, which I did, expecting a quick resolution. Surely the all-powerful Secretary of State, Hillary Clinton would get Consular Affairs to immediately ask India to not discriminate against US citizens based on their origin and treat all Americans uniformly for visa applications?

American Citizen Services told me that India has a right to deny my visa – to which I replied, of course, that that was not the problem. I would accept a denial on my US passport if I was put through the same process as any British, Irish, Italian, Arabic or other origin US citizen. As a US national, I wanted equality, and to be able to travel as a US national without my origin playing any part in that. It is the State Department’s job to ensure that US citizens are not discriminated against. And yet, they told me: “We cannot make India look at you as an American”.

Isn’t it great to see that US$1.20-per-American-abroad American Citizens Services budget is bringing us so many “great benefits of American citizenship”?

If Mr. Nouman’s story has a happy ending and he makes it to India with a visa in his Pakistani passport instead of his U.S. passport, he’ll find in fact that the U.S. has been putting out all efforts for more than three years to make India and every other country on earth look at him as an American. The U.S. is so intent on achieving this that they’re threatening (through FATCA’s provisions on gross proceeds withholding) to confiscate 30% of U.S. assets owned by residents of other countries if those countries don’t look at you as an American for tax & banking purposes — even if that violates their own laws, and even if you have another passport and emigrated from the U.S. long ago.

END_OF_DOCUMENT_TOKEN_TO_BE_REPLACED 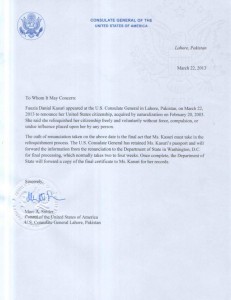