The website of the U.S. Embassy in Dublin (archive.org — archive.is) is stating that they have “no Renunciation [Sic] appointments available at the U.S. Embassy Dublin from 6th April 2016 until 5th December 2016″. Hat tip: @DavidSShaw13 on Twitter. 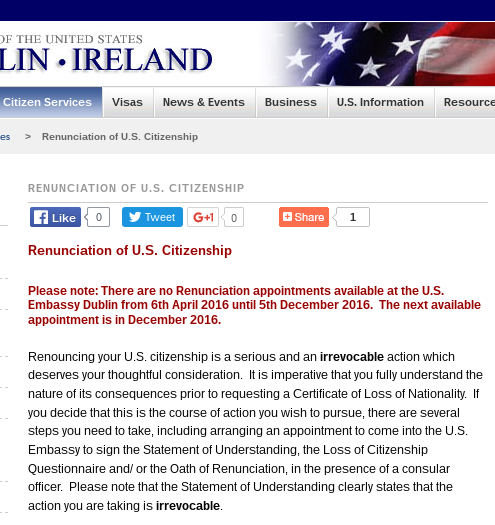 So I decided to see whether other embassies & consulates had any similar revelations on their websites, and made tables of the results. These tables cover 175 locations — at least one post in every country where the U.S. State Department has (or had) a permanent physical presence, though not all posts in each country are covered. According to the State Department, the U.S. has “more than 270 diplomatic locations around the world”, though some of these are missions to international organisations or otherwise don’t handle renunciations. These are divided into two groups:

1. A table of links to the renunciation information pages of U.S. embassies & consulates, along with any notable comments on those websites about their procedures (51 entries)
2. A second table of embassies/consulates whose webpages don’t contain any detailed information on renouncing U.S. citizenship nor any mention of how to make an appointment (124 entries, or more than 70% — including twelve embassies to European Union member states).

From my examination so far, Dublin is the only post whose website confesses to a renunciation backlog. However, others reveal they are restricting the supply of appointments to an hour a week or one half-day each month. The rest won’t openly admit their backlogs or scheduling restrictions at all (though we know thanks to Patrick Cain that Toronto has a similar 10-month backlog). And some are deliberately making things even more difficult & time-consuming by demanding a two-appointment process with a two-week wait or longer in between, or telling you to fill out unnecessary forms in quintuplicate, or other such absurdities. (And very few are clear about their procedures for non-renunciant relinquishers, or even mention the word “relinquishment” at all.).

The majority of posts instruct you to email or call for renunciation appointments, and state or imply that they don’t accept online bookings; I find it quite likely that these posts are also silently restricting the supply of appointments. Only a few (for example, Brussels and Seoul) explicitly indicate that online booking (under the “notarial or other services” category) is acceptable. It might actually be easier to get an initial appointment at one of the posts whose websites don’t mention renunciation: since they don’t mention any restrictions on appointments, they can’t object if you just go ahead and book under “notarial or other services”. These posts also probably perform so few renunciations that their staff will have to ask you to come back again for a second appointment so that they can read up on the procedures in the interim & check with their superiors, but at least they might feel too embarrassed to make you wait the better part of a year for the second appointment.

END_OF_DOCUMENT_TOKEN_TO_BE_REPLACED

Following up on my last post about renunciation rates in Asia, here’s some extracts from EuroStat’s loss of citizenship table, which I ran across recently. (Like last time, all diaspora population figures are taken from the Global Migrant Origins Database, and don’t include ethnic descendants with other citizenships). The EuroStat data is not very good for longitudinal comparisons, since it only shows one or two years, but there’s still some interesting things to be learned from it. One of many instructive cross-sectional comparisons:

END_OF_DOCUMENT_TOKEN_TO_BE_REPLACED

Laura Harrison McBride has an interesting article over at The Smirking Chimp blog (tagline: “News and commentary from the vast left-wing conspiracy”) entitled “Me and Eduardo Saverin; The major difference is money”, in which she discusses her own relinquishment of U.S. citizenship in February 2012 and eloquently contests the tiresome mainstream narrative (spread by bloggers like Matias Ramos and the Tax Justice Network) that people giving up U.S. citizenship are all rich traitors “fleeing” the United States with ill-gotten gains in their pockets.

END_OF_DOCUMENT_TOKEN_TO_BE_REPLACED

In non-Anglophone countries, a lot of the coverage of FATCA is driven by cross-border tax consulting firms — the only organisations with the resources to translate huge volumes of FATCA news into the local language, and the connections to push their version of the story to local journalists on a regular basis. These companies, despite their crocodile tears, are very happy about all the new business that FATCA is going to generate for them in helping customers navigate complex new requirements, and get no benefit by promoting opposition to it.

In Anglophone countries, however, the local journalists have no excuse for not getting their FATCA coverage right anymore; there is a huge amount of material out there about the potential negative effects of the U.S.’ new fiscal imperialism. So it’s interesting to see the sharply differing coverage of FATCA in Ireland — a country with a high presence of cross-border tax sandwich-makers — and Jamaica, where such companies are far less active.