The Obama administration & the DopeState had orchestrated a gigantic expat-bashing propaganda campaign to smear expat US citizens, leading up-to the intro of FATCA and continuing through its rollout.

ICIJ, the Soros/USAid “Offshore” propaganda outlet, is itself a spiderweb of offshore shell corporations and shady offshore financing.

Many remember the related hit articles on the revelations of Swiss bank accounts of rich Americans such as Tina Turner (resident and eventual citizen of Switzerland) due to Panama papers and ICIJ(International Consortium of Investigative Journalists).

Well, it turns out that the hypocrites of ICIJ (International Consortium of Investigative Journalists) was funded by a spiderweb of Offshore-Shell –Company DopeState actors (including USAid in critical years, but its current donors are listed below). The article below highlights it. 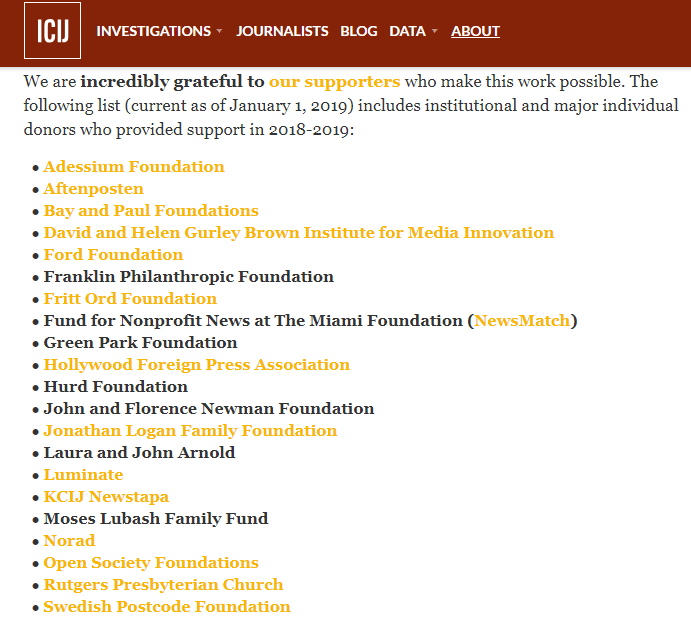 “it’s curious that ICIJ’s Pulitzer-winning series featured Putin so many times given that Putin didn’t even have an offshore account with Mossack Fonseca. It’s also curious that so few Americans were exposed by ICIJ.

It’s even more curious that ICIJ didn’t report much on Browder, the former American turned Irish citizen, apparently for tax purposes, who has used plenty of offshore accounts to lighten his fiscal load. Browder — who was recently exposed in this story by 100Reporters — was for Putin, when he was raking in vast profits from his Moscow-based Hermitage Capital Management holding company, before he was against him, when he was accused by Putin of tax fraud. (Putin is a tyrant but he is, incidentally, right to be suspicious of journalists and NGOs, which he rightly views as agents of regime change.)

Browder is just one of many ICIJ donors to utilize offshore vehicles. In fact, according to 100Reporters, (Browder’s) Hermitage Capital Management “was built on corporate registrations authored by the Mossack Fonseca law firm.” “

…. Oh yeah, did I mention that Browder is suspected of (USAid) funding the Organized Crime and Corruption Reporting Project, a partner of ICIJ? And that the much-praised OCCRP has written extensively about Browder, in the most fawning terms imaginable, without disclosing that suspected funding? “

The Oldstock Brockers had also harbored hopes that Glenn Greenwald might have fought for the rights of expats, but the article shows that his DopeState connections well show that he is an establishment lackey

Read about it in this article

Like Loading...
« Young Adult Person Subjected to Intense “Grilling” at U.S. Consulate in Canada During Request to Renounce United States Citizenship — Appropriate or not? — December 19 2019 update with detailed account
EmBee’s Thoughts on Brock »