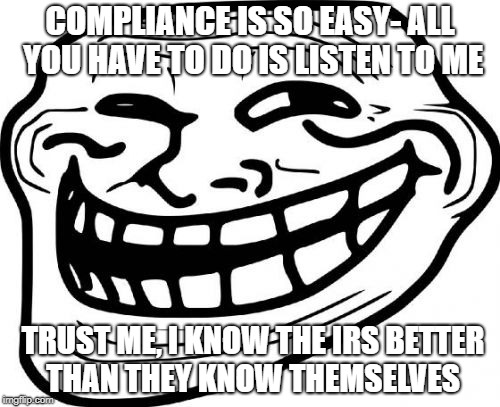 I was very surprised to receive the following email on Friday evening. I cannot recall ever getting anything like this before. I will not identify the author because it is not proper to publicly share an email without the permission of the sender. It is not anyone I have ever heard of before and I doubt any of you have either. It took me a while to decide if I would answer or not. I tried to put my reaction aside after all, why be surprised that a tax compliance professional would demonstrate so little awareness outside of his/her experience. In the end, I simply could not ignore how I felt. I replied and have decided to publish the email without naming its author and my response.

I wish I had pointed out to this person that technically, due to the Canadian IGA (or likely any Model I agreement), that there are no harsh penalties that have been implemented. A professional who is truly conversant with this situation should have stated this better. Does such a statement show a conscious attempt to confuse the expat, assuming penalties from FBAR, OVDP etc will come to mind? Could it be a reference to the idea that Form 8938 is a harsh penalty all on it’s own? (As a matter of torture, most definitely….) Or is the practitioner just sloppy? (Maybe we could get this person to rule on all the “plain language” misapplications we hear of….retroactive 877A, anyone?).

I also wish I had challenged the statement that “the program is working.” There is nothing to suggest that the majority of non-resident (or resident, for that matter) Americans have become compliant. The numbers quoted in the statistics for the OVDP are nowhere near 9 million and we know some of those who came forward are Homelanders. For some interesting figures regarding compliance please see Professor William Byrnes’ “Is FATCA Much Ado About Nothing“? . Prof. Byrnes states “The IRS War on the FBAR is simply not working.” (“The IRS received 807,040 FBARs in 2012; compliance with FBAR filing appears to be declining.”) Every tax compliance professional should be required to read this report. It would go a long way in curtailing the inflammatory language we experience, intended to confuse & frighten and assumes we are all idiots.

I also should have challenged the nonsense about ICE not allowing visas of former citizens being allowed to enter the U.S. This amounts to the usual threat of the Reed Amendment. Does ICE have the power to override the State Department?

I am simply astonished at the arrogance of this person. What to say of the obvious limited exposure of such an “expert.” (I have never heard anyone suggest that there are bank problems in Canada). Mentioning OVDP and not Streamlined. Who on earth does this person think he/she is?

My USC/resident-CPA sister strongly suggests I complain to the appropriate accountancy board.

If this is the Patricia Moon who has given up her US citizenship because of FATCA, then this is for you. I have seen your “protests” regarding FATCA and filing US tax returns. You stated that you were delinquent in your filings, and that you caught yourself up and then renounced your citizenship.

You are one of the very reasons that FATCA with its harsh penalties was implemented. I have been practicing in the international tax area, specializing in US expatriates, for over 31 years. I am the chairman of a state CPA Society’s International Tax Committee, and have an international reputation in this area. Over my 31 years’ time I have prepared and/or reviewed several thousand tax return. I have seen dozens of people such as yourself , people who are American citizens, and enjoy the benefits of being an American citizen, while failing to fulfill the obligations that come with citizenship – namely filing a US tax return and paying any tax due. One cannot enjoy the benefits of American citizenship without complying with the responsibilities.

Since FATCA has been implemented, there have been citizens such as yourself who have renounced their citizenship. I understand from a couple of US Customs & Immigration attorneys that I work with that ICE often won’t allow visas to come back to the US, sometimes even for vacations, to former US citizens. However, a much larger number of persons have come forward and are now filing tax returns and complying with the responsibilities of being a US citizen.

So the law has worked. It is accomplishing its intended goals. I personally have worked with several formerly noncompliant individuals to “get them legal” through the Offshore Voluntary Disclosure Program.

Staying legal is not a difficult process. It requires filing a US tax return every year. Often there is no tax due from it, as the foreign tax credits and the foreign earned income exclusion will reduce or eliminate the tax on all but US-sourced income.

Giving up citizenship is a drastic step when compliance is so easy. It is like amputating your arm because you have a hang nail.

And, from my experience, most larger banks WILL continue to work with Americans abroad. Very few are closing American accounts. In Canada, for example, I know that BMO Harris actually promotes accounts for Americans. I have several clients in Canada who bank with them. RBS Bank, Banque Scotia, TD Mortgage Corporation, Canadian Imperial Bank of Commerce, and many others.

Just my thoughts. Feel free to give my name to any individual who wants to become legal, but does not want to go to the extreme that you did.

Your email is extremely offensive and demonstrates that you understand this situation from one point of view and one only.

Perhaps you are unaware of the fact that the large majority of expats living outside the US for decades were simply unaware of any requirement to file taxes and information returns. The U.S. made no attempts to educate or notify people of these requirements. Surely you have known people who were “non-willful.” I certainly hope you did not put any persons such as these in the OVDP/OVDI.

Your comment “You are one of the very reasons that FATCA with its harsh penalties was implemented” is curious, given I did not owe any tax. I was a stay-at-home mother with an annual income that never exceeded $11,000 CAD from doing the books for my husband’s company. An annuity inherited from my parents was transferred at a later time and I most certainly paid the tax that was due.

If by “benefit” you mean having access to “the greatest country on earth” I will tell you that a component of renouncing involved my observations about Abu Gharib, Guantanamo, the assassination of American citizens by drone without due process and other actions that frankly made me ashamed to have ever been an American citizen. In other words, your assertion that my renunciation was “like amputating your arm because you have a hang nail” simply does not cover all that was involved. Not the least of which, was my Canadian family and how they felt about the effect of U.S. policy on their lives. My husband resented any account information being turned over to FINCEN (given the fact it was his money)and it was a huge issue in the marriage.

I have remained active in this movement having renounced over 6 years ago. I don’t gain anything personally by volunteering a huge portion of my life to this. I am fully conversant with what is required regarding compliance. It is not always simple and it is very expensive. You fail to mention facts such as:

I personally have no desire whatsoever to go to the United States. I don’t care what CBP and ICE do. It doesn’t frighten me at all. A Canadian does not need a visa to visit the U.S. anyway.

None of us have ever claimed that obtaining bank accounts or mortgages is difficult in Canada. This is a situation that primarily affects Europeans and it is very, very real. I know many people who have been severely impacted by it. It was perversely disingenuous for Judge Rose claim in the Bopp FATCA ruling, that this was not due to FATCA but to independent action of the banks.

Over the years I have encountered many people such as yourself, who seem to think they are entitled to inflict their opinions and judgments about character based upon presumptions made about U.S. expectations. I wonder if it could ever occur to you that there are other places and people in the world who do not base the value of their existence upon opinions such as you have expressed. I find it difficult to believe you would end asking me to send you clients. I trust this will be the end of any communication.

Like Loading...
« Part 9-2: Responding to the Sec. 965 “transition tax”: From the “Pax Americana” to the “Tax Americana” (cont)
Outstanding new resource on FATCA, CBT, etc. by Andrew Grossman »

73 thoughts on “If you Decide to Comply, DON’T choose a Homelander Tax Compliance Professional”