REINCE PRIEBUS CHOSEN TO BE PE TRUMP’S CHIEF OF STAFF

WASHINGTON — President-elect Donald J. Trump on Sunday chose Reince Priebus, the chairman of the Republican National Committee and a loyal campaign adviser, to be his White House chief of staff, turning to a Washington insider whose friendship with the House speaker, Paul D. Ryan, could help secure early legislative victories.

But as chief of staff, Mr. Priebus will be the one who has several hundred White House staff members reporting to him. He will be the primary gatekeeper for Mr. Trump and the person most responsible for steering the president’s agenda through Congress. That role will be especially critical for Mr. Trump, who has never served in government and has few connections to important political figures.

As Mr. Trump denounced the Republican primary process as rigged and, on occasion, threatened to quit the party and run on his own, Mr. Priebus remained neutral. And when Mr. Trump secured the nomination, Mr. Priebus stood by his side.

Mr. Priebus worked with Mr. Trump on the nuts and bolts of presidential politics, trying to smooth his rough edges and staying in close contact as a bare-bones campaign prepared to go up against the Clinton machine. 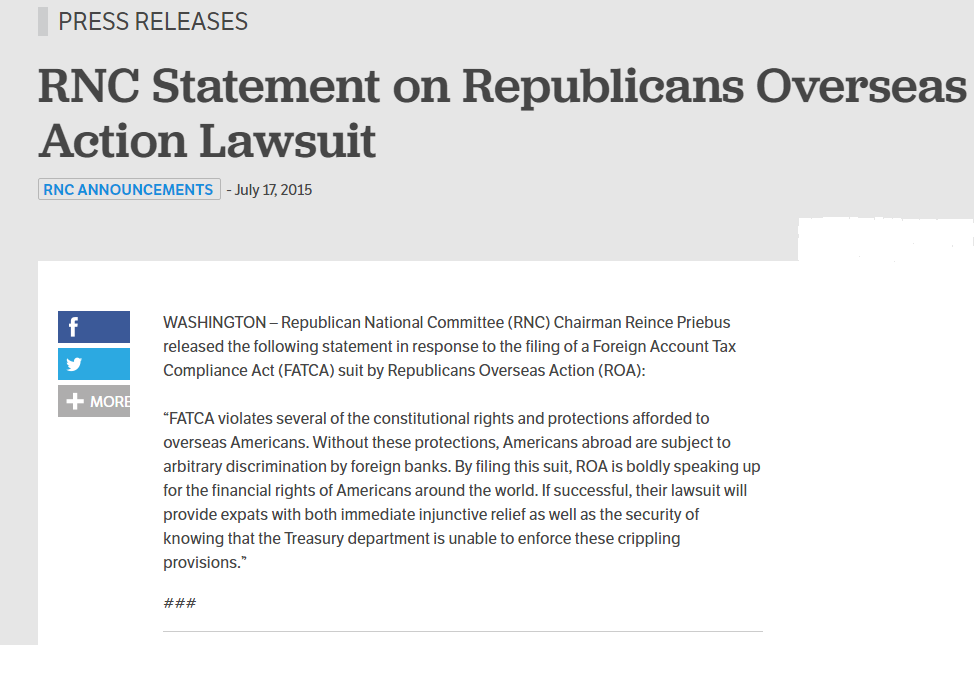 I found myself wondering just what it is expats will want to focus on now, that the Republicans have the Presidency, and control of the House and the Senate. As Stephen Kish pointed out, this could change in two years (well, really just a bit more than a year as once the campaiging for the interim elections in 2018 start, we will likely have lost our chance to get this done quickly. What we do in the next year is critical to dumping FATCA and CBT.

I started thinking about what they promised and have gone through the Platform. I am going to list the main things I found that relate to our issues; if anyone finds more, please post. I also have two documents that focus specifically on FATCA and RBT as well as the link to Republicans Overseas Resolutions posted long ago on their FB site. It would be helpful if others want to isolate points and phrases to focus on in communications to the Republicans.

People may. may not want to coordinate efforts but I assume there will be letters written, emails sent and so on. You may remember that Congressman Mark Meadows (R NC) introduced H.R. 5935 seeking to have an oversight hearing on FATCA repeal. Once we know the date of the hearings and who will sit on the committee, we would start there I presume. And then follow the movement of what occurs……Calls for witnesses were posted on the Isaac Brock Society indicating interested parties should contact Keith Redmond by email at FATCA_Testimonials@outlook.com

THE REPUBLICAN PLATFORM
excerpts from sections related to our issues

The current tax code is rightly the object of both anger and mockery. Its length is exceeded only by its complexity. We must start anew. That will be an enormous undertaking and, if it is to succeed, it must command the attention and approval of the American people………….. We will welcome all to this enterprise — to discuss, debate, challenge, and amend — so that together we can restore economic growth for the American people and, even more important, renew their faith in the future

NB:This is their promise to listen.

Our Tax Principles p 2
To ensure that past abuses will not be repeated, we assert these fundamental principles. We oppose retroactive taxation. We condemn attempts by activist judges at any level of government to seize the power of the purse from the people’s elected representatives by ordering higher taxes. We oppose tax policies that deliberately divide Americans or promote class warfare.

NB:This would deal with the bizarre idea that 877A is retroactive.

To guard against hypertaxation of the American people in any restructuring of the federal tax system, any value added tax or national sales tax must be tied to the simultaneous repeal of the Sixteenth Amendment, which established the federal income tax.

NB:This would eliminate the whole need for filing in terms of taxes as value added or national sales tax will not affect Americans abroad in any significant way.

NB:Please see an excellent paper by Roger Conklin which outlines how CBT directly affects Trade.(via The Revenue Act of 1962 & The Tax Reform Act of 1976; the U.S. has never recorded a trade surplus since 1975).

We endorse the recommendation of the National Commission on Fiscal Responsibility and Reform, as well as the current Administration’s Export Council, to switch to a territorial system of taxation so that profits earned and taxed abroad may be repatriated for job-creating investment here at home. We believe American companies should be headquartered in America. We should reduce barriers to accomplishing that goal. A Winning Trade Policy International trade is crucial for all sectors of America’s economy. Massive trade deficits are not. We envision a worldwide multilateral agreement among nations committed to the principles of open markets, what has been called a “Reagan Economic Zone,” in which free trade will truly be fair trade for all concerned.

NB:Trade is important to Trump. He needs to know how CBT affects it. If they offer territorial taxation to corporations,they can offer RBT to Americans abroad.

A REBIRTH OF CONSTITUTIONAL GOVERNMENT

The Foreign Account Tax Compliance Act (FATCA) and the Foreign Bank and Asset Reporting Requirements result in government’s warrantless seizure of personal financial information without reasonable suspicion or probable cause. Americans overseas should enjoy the same rights as Americans residing in the United States, whose private financial information is not subject to disclosure to the government except as to interest earned. The requirement for all banks around the world to provide detailed information to the IRS about American account holders outside the United States has resulted in banks refusing service to them. Thus, FATCA not only allows “unreasonable search and seizures” but also threatens the ability of overseas Americans to lead normal lives. We call for its repeal and for a change to residency-based taxation for U.S. citizens overseas.

NB: This needs no comment. Other than it might be pointed out that many of the accounts reported on FBAR and 8938, are registered government plans. Some even include government grants which are taxed. The idea that these can be used for money laundering or terrorism is simply absurd.

We intend to restore the treaty system specified by the Constitution: The president negotiates agreements, submits them to the Senate, with ratification requiring two-thirds of the senators present and voting. This was good enough for George Washington but is too restrictive for the current chief executive, who presumes to bind this country to bilateral and multilateral agreements of his devising. His media admirers portray his personal commitments — whether on climate change, Iranian weapons, or other matters — as done deals. They are not, and a new Republican executive will work with the Congress to re-establish constitutional order in America’s foreign relations. All international executive agreements and political arrangements entered into by the current Administration must be deemed null and void as mere expressions of the current president’s preferences. Those which are in the national interest but would traditionally have been made by treaty must be abrogated, renegotiated as treaties, and transmitted to the Senate for its advice and consent as required by the Constitution. The United States will withdraw from all agreements and arrangements failing those standards.

We also support making the federal tax code so simple and easy to understand that the IRS becomes obsolete and can be abolished.

Here are three more direct sources of the Republican positions. I will probably do the same with these as above. But the more the merrier!

Like Loading...
« The American People Have Spoken
Federal Register lists 1,379 people who didn’t want to wait for U.S. election results »