“The Foreign Account Tax Compliance Act (FATCA) and the Foreign Bank and Asset Reporting Requirements result in government’s warrantless seizure of personal financial information without reasonable suspicion or probable cause. Americans overseas should enjoy the same rights as Americans residing in the United States, whose private financial information is not subject to disclosure to the government except as to interest earned.
The requirement for all banks around the world to provide detailed information to the IRS about American account holders outside the United States has resulted in banks refusing service to them. Thus, FATCA not only allows “unreasonable search and seizures” but also threatens the ability of overseas Americans to lead normal lives. We call for its repeal and for a change to residency-based taxation for U.S. citizens overseas.”
https://prod-static-ngop-pbl.s3.amazonaws.com/media/documents/DRAFT_12_FINAL%5b1%5d-ben_1468872234.pdf
Let’s add the comparison DNC platform 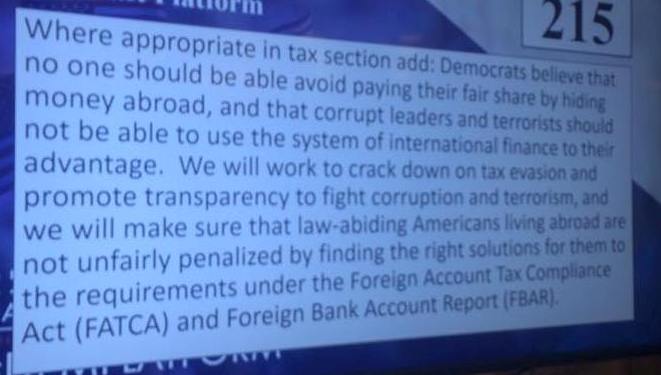 Here is the Hillary position

For The Hillary’s personal message, go to this Brock post

If there is a message from the RNC candidate Trump, we can compare it here

67 thoughts on “Republican 2016 platform for FATCA repeal and against extra-territorial personal taxation (CBT):”