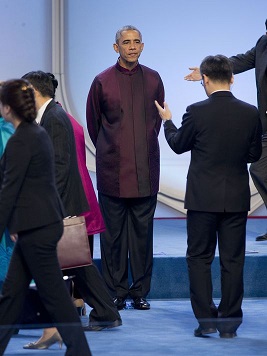 Fearing Up for #FATCA– with all Necessary Propoganda from the Administration

As the administration and friends were looking for someone else to fund both their deficit and their new domestic jobs bills (such as 2010 HR 2847 Jobs for Mainstreet Act), they looked around for new ways to get money from people they didn’t like. However, they needed to get it from people who couldn’t fight back. They also needed to make sure that no one else would come in and defend those people.

G.Obombda Barracks (G.O.B. or OB for short) asked his team: “What is the largest segment of US citizens that can’t fight back?” His team answered: “There are 7.6 million US citizens living outside the USA, and we make it difficult for them to vote–as difficult as we can, that is”

OB: “Any others?” Team: There are 10’s of millions of legal immigrant residents, whom we don’t need to please because most of them can’t vote.

OB: “Is that all you got?” Team: “Course not—they all got spouses and kids”

OB: “Better. But not good enough.” Team: “A bunch of ‘em got business partners, too”

OB: “What else can you get me?” Team: “We can get you entire families overseas with green cards”

OB: “Looking better and better.” Team: “And their green cards don’t even need to be active or usable.”

OB: “I like it. Let’s call them all “US Persons” What else?” Team: “Here’s the best part–they don’t have to BE those things, they just need to be SUSPECTED to be those things”

or copy past link: http://bancdelasteroideb612.wordpress.com/2014/11/11/america-gang-bangs-its-own-citizens/

What’s most upsetting to us is the meme manufactured and controlled directly out of that big white house. It is nearly impossible to take on this attack upon on head on. The resources that are devoted to screwing us are way too high.

The post is meant to instill the importance of what we all know–that something is needed to start a new meme about US expatriates (and green card holders, and immigrants, and spouses, and business partners……).  Some new meme needs to overtake Schumer’s and Levin’s and Bill Nelson’s and Barbara Boxer’s smearing of US persons.

7 thoughts on “America Attacks its own Citizens”