Essentially, Lynne was invited to speak about FATCA and the IGA. I, for one, admire her bravery and commitment to our shared cause and her willingness to appear before the committee and not only speak, but answer questions from the committee members.

She only had 5 minutes for her opening statement, and then was expected to answer questions from the members of the committee. At the time of this posting, I don’t have a full report on exactly what was said and asked. We will provide that as soon as we can.

What I do have is the speech Lynne prepared in advance. I most sincerely hope that her very eloquent statement fell on receptive ears. 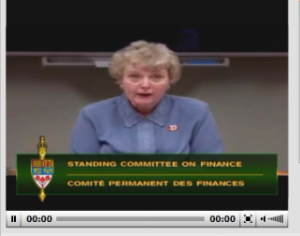 UPDATED LINKS TO THE VIDEO:

Isaac Brock Society YouTube channel:  An edited compilation of Lynne’s presentation and her interaction with the committee

I come before you as the voice of one million Canadians.

We are Canadians. Many have been Canadian citizens for life or for decades. We chose Canada. We expect Canada to choose us and our rights over foreign bully demands.

“Why do our most heinous criminals have more Charter rights than I do,” asks a Nova Scotia police officer of 33 years. He was born in Maine almost six decades ago because his New Brunswick mother was sent there to give birth.

A Quebec woman who has been a Canadian citizen since birth says her ancestor who came to Canada in 1682 must be turning over in his grave at FATCA.

A widowed Grandma in Vancouver was told by US Consulate when she became a Canadian citizen in 1972 she was permanently and irrevocably relinquishing American citizenship. She insists, “My financial records are definitely none of the business of the IRS.”

An Ontario First Nations husband and father is horrified his Canadian government will help United States seize his family’s financial records because his Native Canadian wife was born there.

An Alberta woman reports her mother who upheld Canadian laws for many years as Justice of the Peace is now medically and physically too frail to deal with FATCA stresses.

They and one million other Canadians were betrayed by FATCA Intergovernmental Agreement. We were offended and insulted to hear Minister of State for Finance call us “American citizens abiding here in Canada” in the House of Commons.

If Canada mandated financial institutions to seek Canadians born in China, India, Iran or Eritrea for CRA to transmit private financial information to those nations, there would be outrage.

Canadians born in United States should have the same rights as all other Canadians. Canada should strongly defend those rights and not sacrifice them to a foreign country.

Two prominent Canadians described FATCA well. In 2011 and many times after that, Finance Minister the late Jim Flaherty said “FATCA has far-reaching extraterritorial implications. It would turn Canadian banks into extensions of the IRS and would raise significant privacy concerns for Canadians.”

Terry Campbell, President of Canadian Bankers Association in 2012 called FATCA “the poster child for the problem of extra-territoriality…It threatens to erode Canadian sovereignty.”

Those statements hold true now. Under threat of economic sanctions and penalties, Canada surrendered its sovereignty to a foreign power with the IGA.

Canadians affected by FATCA were stunned last week when a member of this Committee said “Congress has spoken.”

FATCA is complex. I give you a simple solution. I urge you to adopt an amendment to the Implementation Act:

I implore you. Do the right thing. Stand up for Canada and for all Canadians.

Here is the full-day session: