Rumour has it that some people associated with the Issac Brock Society, attended a Diane Francis lecture and book signing event held Dec 4, 2013 in Toronto. The attendees included:  IRSCF, Gwen and friend, Tricia, and a Brocker sympathizer who will be called “Gordon.”   Although the attendees seem to feel that discussion of this event, given the presenter,  is not deserving of a thread of its own, I disagree, and am posting this on their behalf.

A photograph of the vehicle Ms. Francis flew in on, and the experiences described to me by the attendees follow. 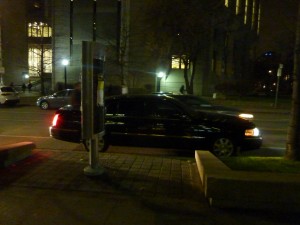 Outside the lecture hall, Gwen and friend handed out copies of three pamphlets, one of which was an article by Blaze published in Diane Francis’ own newspaper, the National Post (re-entitled “FATCA-We are not tax cheats”).  Happily, the pamphlets could be seen to be read by the audience inside the lecture hall.  Tricia overheard one of the organizers say to Ms. Francis that 56 people would be attending.

Inside, three Brockers were strategically placed and separated from each other to increase the likelihood that they would be called upon during the question period.

The talk itself was an argument that Canada should merge with the U.S.  However, Francis actually (unintentionally) made a much stronger argument that Canada should merge with China: “China has the smartest government in the history of the world.  The U.S. and Canada have too many checks and balances in the system making it hard to get anything done. The government of China very specifically supports its companies and citizens abroad.  This is the key to their success.” [Unlike the U.S. which of course persecutes it citizens abroad.]

Francis’ arguments were based on economies of scale: Canada is too small to be a player and needs the protection of a bigger partner.  But, since Francis admires China, then that partner should reasonably  be China.

In her talk it was clear that Ms. Francis completely misunderstood the civil war origins of citizenship-based taxation, which she incorrectly believed had begun with prohibition.

Tricia began her question by establishing that, like Ms. Francis she had been a dual, was from the Midwest, with a German background, and moved on to: “You’re on record for supporting FATCA.”  Ms. Francis stopped Tricia by saying that she had not said anything like that.  Ms. Francis was clearly uncomfortable about FATCA, did not want to talk about it, and stated her strong belief that those who are supposed to file US tax forms should pay, etc. [see below for comments by IRSCF and Gordon on Ms. Francis’ FATCA statements.]

Tricia, and the other Brockers at the lecture, were completely taken aback by Ms. Francis’ apparent effort to separate herself from FATCA, and Tricia was unsure how to move forward with her question.  Tricia then commented that on a philosophical/moral level, Canadians would feel that the U.S. could certainly not be trusted given situations such as Gitmo, torture, etc.  Ms. Francis responded by saying that in this event, rather than a full merger, the thing to do would be to move to a European Union model.

IRSCF attempted with his question to influence Ms. Francis to acknowledge publicly, for the very first time, that US imposed citizenship based taxation (CBT) seriously harms innocent Canadians, but he was not successful.  Francis would only admit that she (alone) had been harmed by CBT by having to fill out tax forms for the IRS.  She also said that ignorance of the foreign tax laws is no excuse, and that if one does not like US tax laws one should renounce.  IRSCF then explained that the process of renouncing is not simple, and that there is the problem of the Reed Amendment etc,. Unfortunately due to the insistence of the moderator, the ‘discussion’ ended.

DOES MS. FRANCIS HAVE AWARENESS OF FATCA?

After receiving a copy of the book signed by Ms. Francis, each Brocker handed Ms. Francis signed copies of “FATCA, We are not tax cheats,” “FATCA, we are not myths,” and “USA to invade Canada.  AGAIN!”,  hoping that Francis would find the information to be helpful and educational.

In response to Tricia’s question about FATCA, IRSCF felt that Francis responded in part by saying, “What is FATCA?”  Gordon agrees that Francis replied in a way that did not admit to knowing what FATCA is, and Gordon comments: “She clearly did NOT want to discuss it. I am not sure why.  I just remembered in her answer that she specifically said that she did NOT say that she supported FATCA.  This is different from saying that she didn’t support FATCA though.  Frankly, I think that she is an [deleted] and just accepts that FATCA is somehow related to tax evasion.  But, even if it isn’t (related to tax evasion), as an admirer of China, she would approve of the authoritarian nature of it”.

IRSCF, still mulling over Diane Francis’ apparent lack of understanding of   FATCA, continued to press this issue with her at the book signing.   Following two (three?) more attempts at questioning there appeared to be some limited understanding from this editor of the Financial Post that FATCA had something to do with ensuring that taxes would be paid to IRS from dual citizens in Canada.

Tricia was the last person in the book signing line and as she handed Francis some FATCA pamphlets she said “I have something for you about FATCA” which provoked a smile from Ms. Francis.

Ms. Francis must have been disappointed at the poor turnout as the original room that was selected seats 400 people.  There were nice snacks and drinks, and the Brockers had pleasant conversations with others.  Tricia spoke to a lady who dealt with FATCA at a bank, and who said she felt that FATCA was a complete disaster and that she was not the least bit supportive about the idea of a merger between Canada and the U.S.

Brockers left the event wondering whether Diane Francis might not be the brightest of the senior business editors at Canada’s Financial Post.

Like Loading...
« Conspiracy lawsuit against TD Bank IV
Required reading for countries considering a #FATCA IGA with the US – @PMHarper take note »