Here is our official press release regarding the upcoming protest in Toronto at the Metro Toronto Convention Centre, November 13 & 14. Thanks to Lynne & Peter! 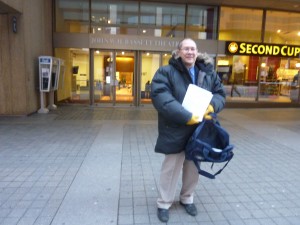 Peter and Stephen are on site and have been they would be arrested if they entered building and tried to leave CBA letters — “comments about CBA are inflammatory.”

Inflammatory is: “… the goal of this conference is to teach them how to navigate the compliance ‘hurdles’ in a session called ‘Preparing to Implement the Foreign Account Tax Compliance Act (FATCA)..”

Canada’s Banks: Would they Sacrifice Charter and Privacy Rights to Comply with Extraterritorial U.S. Tax Law?

TORONTO – U.S. Treasury officials are engaged in a financial attack on millions of law-abiding Canadians and Canada’s banking industry appears ready to help them win.

An open letter sent today to Terry Campbell, President of the Canadian Bankers Association (CBA), urges him and his association to abandon their policy of capitulation to unreasonable U.S. demands and instead defend the rights of Canadians everywhere. The letter is a collaborative effort of Canadians from coast to coast.  Most are participants at the Isaac Brock Society and Maple Sandbox websites at which the letter is posted online.

Under the Foreign Account Tax Compliance Act (FATCA), the U.S. demands that Canadian financial institutions identify “U.S. persons” among their customers and report comprehensive financial information on them to the U.S. Internal Revenue Service. This would include millions of Canadians with U.S. connections, however tenuous.

Peter Dunn of the Isaac Brock Society says “There are an estimated one million people in Canada who would be caught up in this FATCA net.  With family members this could affect about 12% of Canada’s population.  Most are Canadian citizens.”

But FATCA compliance would violate Canada’s Charter of Rights and Freedoms, as well other federal and provincial privacy protections.  The CBA’s position amounts to changing Canadian law to suit American demands.

Finance Minister Jim Flaherty has said FATCA is “extraterritorial” and “unwarranted” and “will turn Canadian banks into arms of the IRS.” Nonetheless, the Harper government – urged on by the CBA — has been negotiating secretly with the United States for more than a year about an Intergovernmental Agreement (IGA) to implement FATCA.  Opposition MPs have demanded transparency and an explanation of the impact an IGA would have on Canadians’ rights and on Canadian sovereignty.

“This letter asks banks to refuse to help the U.S. impose FATCA on Canadians and for the government to enforce Canadian, not U.S. law, on banking, privacy, and human rights” says Lynne Swanson of Maple Sandbox.

Protestors will take that message to the Canadian Institute’s 19th Annual Conference on Regulatory Compliance for Financial Institutions, November 13 and 14 at the Toronto Metro Convention Centre. “Unfortunately the goal of this conference is to teach them how to navigate the compliance ‘hurdles’ in a session called ‘Preparing to Implement the Foreign Account Tax Compliance Act (FATCA),” says Stephen Kish, one of the protestors. “The session will be led by a Washington D.C. attorney formerly international counsel to the IRS.”