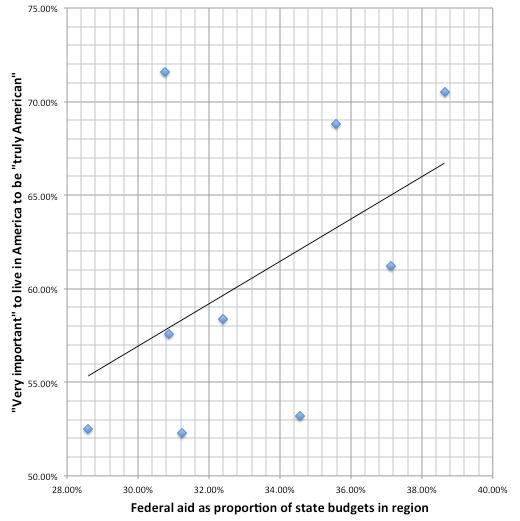 Every one percentage point increase in the proportion of federal aid in the budgets of states in the given region was associated with a 1.13 percentage point increase in the number of people from that region stating that it was “very important” to live in America most of your life in order to be considered “truly American”. (It would have been nice to do a more granular breakdown, but unfortunately the GSS doesn’t provide state-level information on respondents.) In otherwords, the less able your state is to fund its infrastructure and social aid budgets by taxing people who actually live there, the more likely you are to consider Americans abroad to be un-American — no doubt because so many of their tax dollars go towards funding some Sino-Euro-Canadian socialist plot to take over the world, instead of the roads and schools that you use and they don’t.

And for those who are still convinced that this is all Kang’s fault and we can save the nation by voting for Kodos, note that this is a bi-partisan phenomenon. Regions with a higher-than-average proportion of people who consider Americans abroad to be un-American include the mostly Democratic Mid-Atlantic (home of Ex-PATRIOT Act sponsor Chuck Schumer) and the mostly Republican West North Central (whence Chuck Grassley who repeatedly attempts to kill the Foreign Earned Income Exclusion to provide more pork for his constituents, as well as Ex-PATRIOT Act co-sponsor Tom Harkin).

The raw data is presented below as an HTML table for your convenience. All monetary amounts are in thousands of dollars.

Like Loading...
« USAs to Move on US Persons in Canada
Confirmed case of former long-term green card holder not appearing in Federal Register »

12 thoughts on “The more money your state gets in federal aid, the more likely you are to think Americans abroad are un-American”