TradeKing is a privately held discount brokerage firm with headquarters in Fort Lauderdale, Florida, and subsidiary offices in Charlotte, NC.  Its FAQ specifically states that its services are available to all Americans except for non-military personal who live in a particular country or part of the world.

US citizens living abroad
All customers including US citizens must be living in the USA to maintain a TradeKing account. Exceptions may be made for active military personnel stationed abroad.
TradeKing

The act of treating people unequally for living in a particular country or part of the world is listed by the U.S. Equal Employment Opportunity Commission as being national origin discrimination.

National origin discrimination involves treating people (applicants or employees) unfavorably because they are from a particular country or part of the world.
U.S. Equal Employment Opportunity Commission (EEOC)

Under the laws enforced by EEOC, it is illegal to discriminate against someone (applicant or employee) because of that person’s race, color, religion, sex (including pregnancy), national origin, age (40 or older), disability or genetic information.
Prohibited Policies/Practices 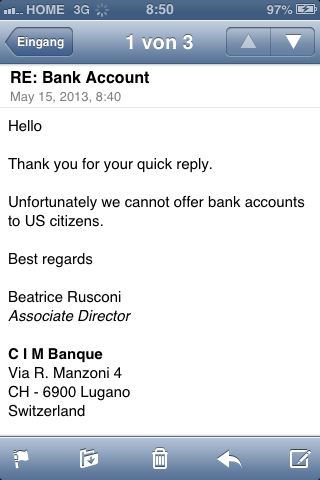 So, Tradeking is illegally discriminating against Americans living abroad.  Yet, when I called the the U.S. Department of Justice Civil Rights Division to inquire further, I got transferred around until I got transferred to an invalid number terminating my inquiry.

In the mean time, Americans living abroad are still being denied financial services inside and outside of America due to their national origin and as a result of US policy.  The image on the left was contributed to the Economic Policy Journal by one of its readers.