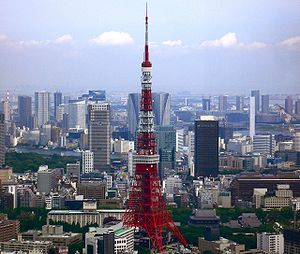 The tallest tower in Tokyo is now Sky Tree; although Tower Tower is still the most recognizable symbol of the city.

Apologies for the break from FATCA and FBAR posts. I am one of the few who have “lost U.S. nationality by willfully committing an expatriating act called naturalization with the understanding that doing so causes the loss of U.S. nationality and then formally reporting it.” That mouthful of legalese is called “relinquishing your U.S. citizenship.”

I had written about my experiences with losing my U.S. citizenship while living in Japan (part 1, part 2, part 3, part 4) and my difficulties in doing so.

While the final process when I met a real consul officer was civil and smooth, my biggest problem was actually making appointments just so someone would see me. U.S. embassy and consulate “American Citizen Services” have been by-appointment (preferably via web, not phone), for some time, and those appointment systems have been optimized to handle the standard ACS services: reporting a birth, a marriage, obtaining a visa, etc.

I noticed that the TACS (Tokyo American Citizen Services) has updated their web site. An older page actually gives a phone number and an expectation as to when the appointment will occur. A newer web page just says to please email them at a group-managed address and play it by ear.

I wrote about this on the following page:

TL;DR version: to renounce/relinquish, don’t use the web appointment form. Email to tokyoacs@state.gov.

You don’t have to have naturalized to Japanese to use Tokyo’s services; the only requirement for renouncing/relinquishing your U.S. nationality is that you don’t do it within the United States (with a small exception made for extreme circumstances, like times of war).

In fact, I was considering using Taiwan’s “American Institute in Taiwan; no way are we an embassy or consulate; we just do everything an embassy/consulate does (wink wink)” even though I live in Japan because I believed they gave better service.

4 thoughts on “Slightly Easier to Lose U.S. Citizenship if In Tokyo”