A message from The Animal:

I think that there should be an article on IBS about the full ramifications of what FATCA and the potential IGA could do to Canada as a whole, not just from an “expat POV”. Right now all they see is “well…better you than me.” Most Canadians won’t be sympathetic until we explain what FATCA can potentially do “TO THEM”!

Agreed. I will take this on. What I would like are as many succinct comments (keep the emotional content to a minimum) on how FATCA will impact Canada and all Canadians. I encourage you to think in the short term, the medium term and the long term. I encourage you to describe things not only in a theoretical sense, but in a real practical day-to-day sense. For example, what does a loss of privacy rights really mean? What will the inability of US persons to engage in meaningful financial planning mean to Canada as a whole? How specifically will surrendering control of the banks to the IRS reduce Canadian sovereignty? What you will do to those politicians who vote for FATCA? Will there be pressure to change  Canadian tax laws to be consistent with the US Internal Revenue Code? How do PFIC, FBAR, Form 8938 and Foreign Trust penalties siphon money out of the Canadian economy? Wouldn’t it be easier to simply adopt the US tax system?

How does US taxation of Canadian residents make those taxed (US persons as presently defined) a possible threat to the stability of the Canadian economy? Should Canada allow any more US citizens to immigrate to Canada? What should be done about the ones who are already here?

A commenter on this blog once said:

If you got em by the banks, their “minds and hearts” will follow!

Or, is this a case of the banks dictating to the Government. I suspect that the banks are “FATCA Complicit” in the extreme. We know that FATCA solves one set of problems for the banks. But,doesn’t it create a bigger set of  long run problems for them?

What, in practical terms does it mean for the “minds and hearts” of ordinary Canadians and their politicians to follow the US? Would it make sense for the Canadian Prime Minister to take his orders from the US IRS Commissioner?

Would Canada, over time, become an “occupied power”? In theory an autonomous nation, but for all practical purposes governed by its political masters in Washington?

If Canada is an “occupied power” does it make sense to retain US citizenship? Is there any reason to renounce it under those circumstances? How would Canada look and feel as a country under FATCA domination?

Hate to sound alarmist, but the FATCA (half pun intended) is that:

– by entering into an IGA, the Harper Government is poised to override the Consitution/Charter of Rights of Canada

This is a time for Canada to lead. In 2003 Canada refused to join the US in the attack on Iraq. This time Canada should refuse to join the US in sending its “FATCA Drone” into other sovereign airspace. Is Mr. Harper up to the challenge? Will he do the one thing that all politicians hate to do – I am referring to the “right thing”.

Some readers of this post may view this as extremist or alarmist. It is my hope that your comments will paint a clear picture of what is truly at stake for Canada and for ALL Canadians.

Or maybe I am completely wrong. Maybe it is possible to cede control of your banks and maintain control over your sovereignty. Isn’t there an issue of banks and sovereignty playing out in Cyprus right now? The Cyprus situation is interesting. I don’t pretend to understand all of it. But, what is clear is that it is an attempt on the part of the EU to exercise some control over the deposits – and by extension – the banks of Cyprus. There is no question that the sovereignty of Cyprus is at stake. There may be good reasons for it, (they can’t just freeload off the EU), but the fact is that control of a country’s banks is related to control of a country’s sovereignty. At least that’s what I think. What do you think?

On the sovereignty issue, here is another message from the Animal: 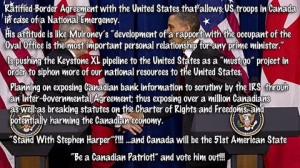 Like Loading...
« Question and Answer on FATCA in the European Parliament
Don’t Forget the US Gift Tax Returns if You Gifted Last Year »