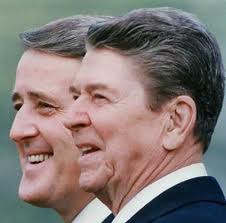 On Tuesday February 12, 2013 Brian Mulroney spoke at Toronto’s Rotman school of business. It was interesting, engaging and a reminder of why he was so much fun to listen to, from 1984 – 1993 when he was Prime Minister of Canada.

The topic of the discussion was the Canada U.S. Free Trade Agreement. Fascinating history. This took place during the Reagan years. The audience was treated to stories about: Ronald Reagan, James Baker, George Bush, Peter Murphy, Derek Burney, Simon Reisman and others. (How many of these people do you remember?)

Mr. Mulroney explained it with reference to the bottle of water in his hand as follows:

If this bottle of water is taxed at 13.5% in Canada, this is a cost of production that is added to the bottle of water before it leaves Canada. How, (since Free Trade allows us to export products to the United States) can that bottle of water compete in the U.S. market, if it is subject to that extra production cost? Obviously it can’t. The conclusion is that Free Trade can only benefit a country if its products are financially attractive.Free Trade provides strong incentives for countries to keep the cost of its exports low.

Mr. Mulroney’s Toronto presentation was delivered approximately three hours before the Obama state of the Union Address. Although, the President did not discuss citizenship-based taxation, there is a parallel between the bottle of water that Canada is trying to sell in a foreign market, and U.S. citizens that (one would hope) the U.S. is hoping will participate in foreign markets.

In the same way that Canada’s 13.5% excise tax increased the cost of Canadian products, the taxation of U.S. citizens abroad, increases the cost of buying the services of a “U.S. person abroad”. Last night President Obama addressed the issue of free trade. He said:

Even as we protect our people, we should remember that today’s world presents not only dangers, but opportunities. To boost American exports, support American jobs, and level the playing field in the growing markets of Asia, we intend to complete negotiations on a Trans-Pacific Partnership. And tonight, I am announcing that we will launch talks on a comprehensive Transatlantic Trade and Investment Partnership with the European Union – because trade that is free and fair across the Atlantic supports millions of good-paying American jobs.

Perhaps the U.S. should tie the desirability of Free Trade to a consideration of tax reform. It makes no sense to promote Free Trade on the one hand, and make it hard for  your country to compete on the other hand.

The most interesting part of Mr. Mulroney’s “trip down memory lane” was his description of what happened during the final evening of the negotiations. It seems that the U.S. side was not willing to allow for an “independent dispute resolution mechanism”. In other words, the U.S. did not want to allow for any disputes to be resolved by third parties (an essential part of the agreement for Canada). Eventually, the U.S. under the influence of James Baker, conceded and the agreement is history. I was shocked to learn of the amount of trade that takes place between Canada and the U.S. If I remember correctly, Mr. Mulroney said that more trade passes between Detroit and Windsor each year, than takes place between the U.S.and Japan. Simply incredible. Also an important reason why the U.S. (if it had any sense) would consider what effect FATCA, and the taxation of Canadian citizens living in Canada, might have on the U.S. Canada trade relationship.

Do the provisions of FATCA violate NAFTA? There are some who think so. This is an argument that needs to be developed.At a minimum FATCA imposes costs and obligations on Canadian banks that do not apply to U.S. banks. Does NAFTA affect tax policy? Do the PFICA provisions and the punitive treatment of Canadian mutual funds violate NAFTA? Those interested in these questions could start here.

“When the economic levers go, the political independence is sure to follow!”

“It’s far more important to us, then it is to the United States.”

What about when control of your banks go, the political independence is sure to follow!

The following video captures the 1988 debate. You might find the comments to the this video interesting.