(Update: the editor apologizes for incorrectly posting a rough draft of this post; here is the corrected draft.  Petros)

Years ago, when I was a Finance major, during our studies we were subtly encouraged to worship the Federal Reserve. Then in law school, were we subtly encouraged to worship the genius behind Marbury v. Madison, 5 U.S. 137 (1803), the seminal case that establish judicial review for constitution propriety.  And later, as a tax law student, we were encouraged to be in awe of the vast public policy considerations placed over the ever expanding 16th Amendment, the essential prerequisite to the the US Federal income tax.

But then time goes on. The theories and idealism of school fades away as the real world intrudes more and more each day into one’s affairs in private law practice.  Things get to a point and idealism so vanquished, one will properly tell clients the uncomfortable truth: “the last place to expect justice is in a court of law.”

Because now when I think about it, maybe the Federal Reserve wasn’t such a great idea. Seems to me that prior to the Federal Reserve Act of 1913, there were neither World Wars nor Great Depressions. Additionally, the obnoxious act of intentionally causing inflation and then taxing the phony gains that the inflation causes seems like double taxation — with at least one layer of representation missing. Seems to me that consolidating the country’s money supply into the hands of a private company composed of the most entrenched international players, well, that seems an intentional abdication of one of Congress’ duties actually mandated by the Constitution.

And maybe Marbury v. Madison was simply a passive-aggressive power grab that set the stage for additional power grabs by the Supreme Court down the line until we reach an absurd point in which wheat grown in one’s own back yard for one’s own personal consumption is actually interstate commerce. Yes, you can decide a case like Wickard v. Filburn, 317 US 111 (1942) against a man like  Roscoe Filburn  and still collect your check as a judge. Tar and feathers seem a more appropriate recompense. 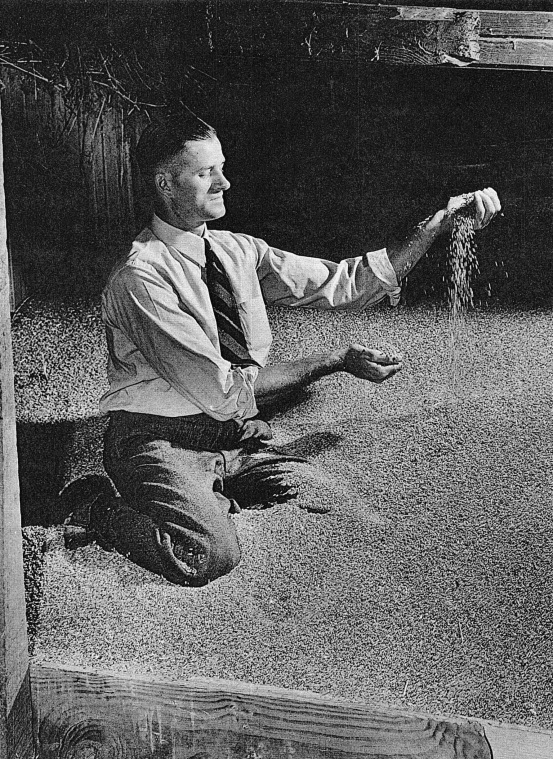 Roscoe Filburn: A handsome man and his handsome wheat and totally against the law.

And maybe all the tax  jockeys that we were to hold in high regard and implementing all these important public policy questions aren’t all that special. Maybe they are just the enablers of the parasites, while being just smaller parasites themselves.  Maybe they are the most dangerous of all as, well, judge for yourself, does this quote make sense to you?

…[The Tax Code is a] product of an unholy combine between statist intellectuals with visions of state-sponsored utopias, envious demagogues and the desire by established, wealthy interests to prevent any competition to their place and to offload business costs to an expanding regulatory welfare state.

Because, if my experience and this quote were a Venn diagram, it would look like one perfect fat circle. A big, fat, perfect circle with no beginning and no end.

The facts generally go like this: Mr. Finbar McGarry was picked up on domestic assault charges. The bail was set too high for Mr. McGarry to post, so he was taken into state custody pending the outcome of the charges, as is customary when one can’t post bond.

In jail, Mr. McGarry was paid 25 cents an hour to work long  days doing all sorts of miserable jobs in the laundry room. If he didn’t work, he would be placed into solitary confinement. So he brought an lawsuit claiming the state forced him to work in violation of the 13th Amendment.

Unbelievably – really – the Second Circuit Court of Appeals ruled that because Mr. McGarry was not convicted, it was completely against the 13th Amendment to force someone to work under such “slave” conditions. The court ruled that the state can’t impose a work-sentence imprisonment on someone who has not yet exercised his right to a fair trial.

So there it is. The first imposition of the 13th Amendment in the Lord knows how long.

And yeah, I really missed the best part for last: The state involved in violating the 13th Amendment? Which state could it be? Those who know where the Second Circuit is located know it can’t be some supposed idealogical backwater like Alabama or Mississippi. Those who know where the Second Circuit knows that one needs to go real north and real blue.  The State that has violated the 13th Amendment is…the State/People’s Republic of Vermont.

How could they do this?   This is from the land of forward-thinking, fair- equitable, progressive (cf. progressive income tax rates), Vermont. Certainly an abolitionists’ paradise. Yet the truth is undeniable. The Second Circuit has demanded that Vermont cease from enslaving innocent people to do prisoners’ dirty laundry.  The ironing is delicious (this is me, hoping the set-up for this pun worked).

Well again, this case, got me thinking. Dangerous thinking.  I remember one of those excellent guides about public policy written by a whole team of impressive tax jockeys that went over the various supposedly stupid claims that taxpayers have made over the years to abscond from complying with the federal income tax.

Some of the more popular claims are that the 16th Amendment was never ratified. The 5th Amendment right to avoid self-incrimination. And one that I always breezed right by –— that the income tax is a tax on labor that violates the 13th Amendment as it is forced divestiture of labor.

And here’s the excerpt form the guide:

C. Contention: Compelled compliance with the federal income tax laws is a form of servitude in violation of the Thirteenth Amendment.

This argument asserts that the compelled compliance with federal tax laws is a form of servitude in violation of the Thirteenth Amendment.

The Law: …In Porth v. Brodrick, 214 F.2d 925, 926 (10th Cir. 1954), the Court of Appeals stated that “if the requirements of the tax laws were to be classed as servitude, they would not be the kind of involuntary servitude referred to in the Thirteenth Amendment.” Courts have consistently found arguments that taxation constitutes a form of involuntary servitude to be frivolous.

Well this argument is fairly stupid. The 13th Amendment was passed prior to the 16th Amendment (that is how our numbering system works).  It is very difficult to put into text what would not be written for nearly 50 years later. Or to put it another way, the First Amendment does not mention the New York Times. So can the states ratify an amendment to eviscerate the right of the New York Times to publish?

Then the guide goes on to say that there is a host of other cases that supports their claim that the 13th Amendment does not bar the income tax.  And instead of taking their words for it, I read the actual opinions.

In “Porth v. Brodrick, [t]he court described the taxpayer’s Thirteenth and Sixteenth Amendment claims as ‘clearly unsubstantial and without merit,’ as well as ‘far-fetched and frivolous.’” Surprisingly, this is the extent of the conversation. Or to put it another way, when explaining why the cases were frivolous, “Shut up, he explained.”

Why? Why the lack of curiosity in giving some basis?  It is as if the courts have nothing better to say than “that’s the law because we say so.” Are we only left with a passive-aggressive power grab, obfuscating a lack of principle with black robes and precedent.

Not to say I couldn’t come up with some argument why the income tax is not in violation of the 13th Amendment’s prohibition on involuntary servitude. I am hardly a legal genius, but here’s a justification I can come up with:

The imposition of an income tax imposed upon individual’s income is not involuntary servitude as the very reason why the person was able to make money in the first place is because of the regulation and security that the income taxes other have paid provide.

There. That’s my best argument. But yeah, it kind of sounds like “You didn’t build that. Someone else made happen.”

And that’s probably why the courts prefer to stay silent about their reasons and heave the legitimate claim of forced labor back into the sprawling combine that is the US tax code.

In conclusion, my point is not that the income tax violates the 13th Amendment (even though it probably does, against individuals at least). But rather, my point that the issue of whether or not the US individual income tax create a form of impermissible forced labor is a very legitimate concern. Every American has the right to ask for an explanation, without fear of being belittled by the courts for bringing a ‘frivolous’ claim. I for one, would love to hear a reasoned, principled argument, correct on factual observations, on how the income tax does not violate the personal liberty guaranteed by 13th Amendment and the rest of the Constitution; this is an argument I have yet to see.

8 thoughts on “Washing the Emperors’ Clothes: The 13th Amendment and the IRS”