Now look at the US Federal Brackets for 2012

Just looking at these charts shows that the effect of the FEIE has been progressively eliminated both by the failure to index it to the CPI and by the collapsing dollar.

Now, let’s consider how much worse it would be if the FEIE were eliminated. Here is the calculation method for Geneva taxes (Complicated, first determine the Cantonal Tax, then the additional communal tax, then figure in the tax rebate voted some years ago to provide relief from the high cost of living). Source: http://ge.ch/impots/bareme-impot-cantonal-communal-2012 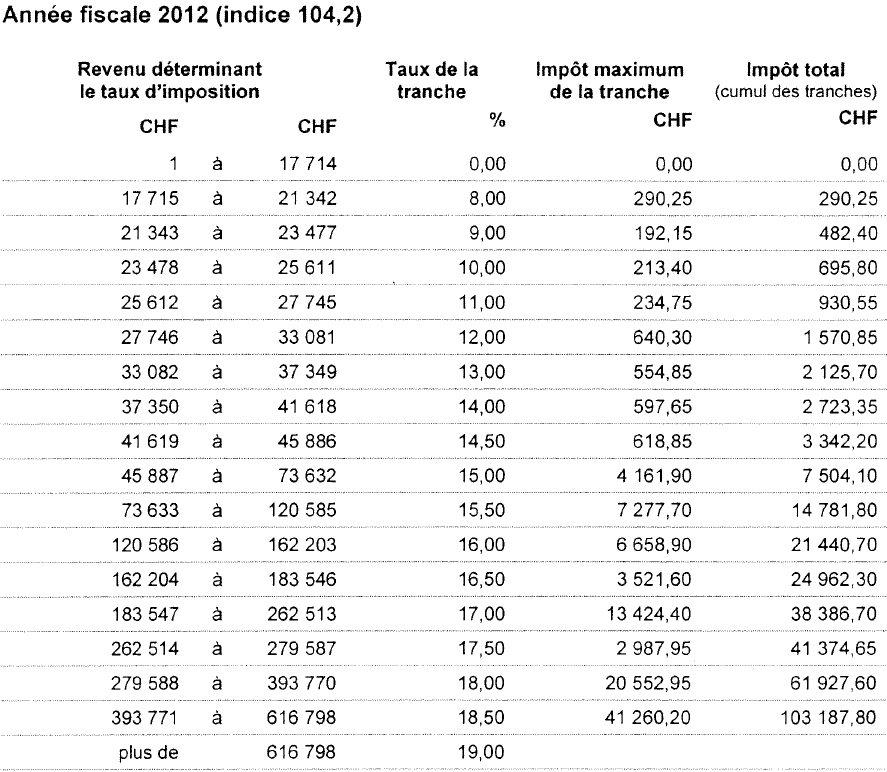 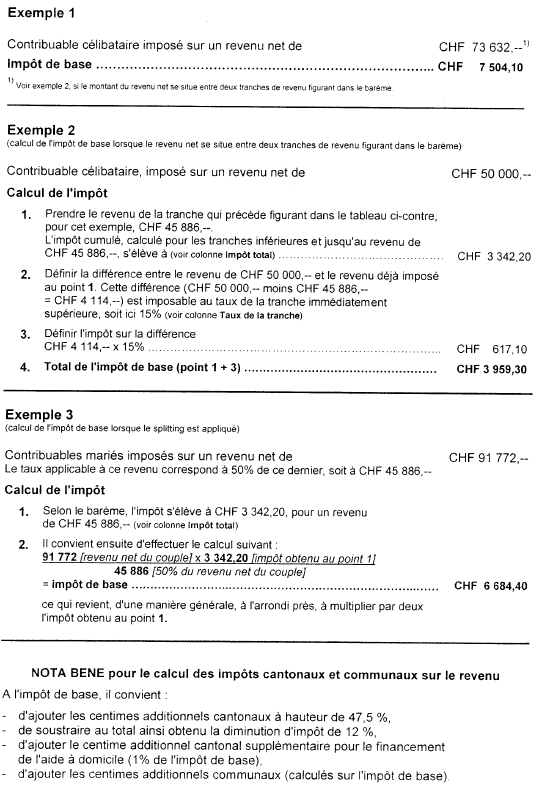 Let us use Example 3. Assume that the family has one breadwinner, a USP (Mr. Johnny Gringo), and a wife (Sophie DuPont Gringo), a non-USP who is going to school to gain skills before having a baby so as to be able to work later. The wife has no income. The family lives in Meyrin, a commune with both expensive villas and duplex homes, as well as high-rise rental blocks.

There is still federal tax to pay: 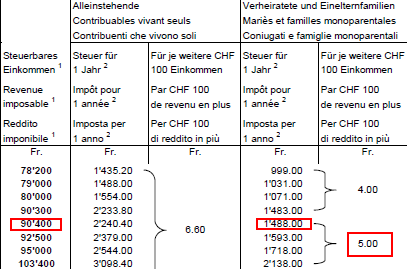 But wait, the base income of 91,772 was a net taxable income ! This was after deduction of social charges such as accident insurance, AVS (social security), unemployment, maternity tax, and mandatory 2nd pillar pension contribution, as well as a portion of the mandatory health insurance policy (8500-12000 per annum for the couple together, depending upon which options chosen). The gross income was probably more like CHF 110,000-120’000.

Lets say that after the standard deduction and dependant deduction of approximately USD 13,000, the USD taxable income comes to roughly USD 100,000.

And we haven’t even figured any effects of the AMT. We didn’t even count the additional US tax on the employer’s contribution (50%/50%) to the mandatory pension plan. Already, this family (if compliant) is paying 1000 Swiss Francs / Dollars extra to the US per month!!! And no housing exclusion because they don’t live in Geneva proper, Meyrin doesn’t count.

Now that you’ve calculated the tax, look at the cost of living. Geneva is more than 50% more expensive than New York, probably the US most expensive big city:

Now, let us figure a sample monthly budget for the couple. Payroll deductions such as pension plan and accident insurance, AVS have been deducted already. I added 5000 per annum for the effect of the tax deduction available in Geneva for health insurance (this is probably an overestimate): 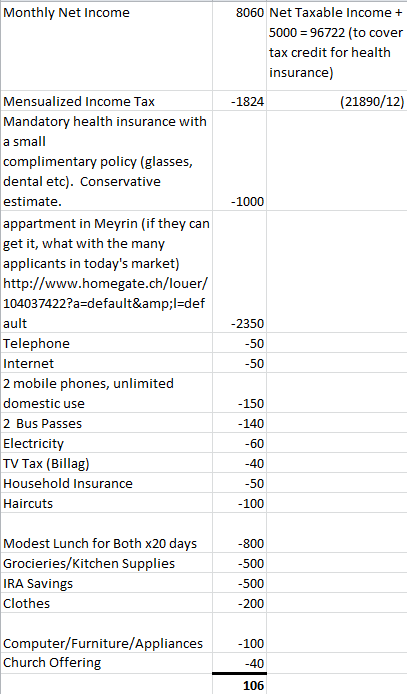 It looks like that there are no vacations in the works, what with some 1200 francs left over per year. I forgot even to count bank fees for credit card, account, etc. And their health insurance has a 300 franc deductible, each, with 10% participation up to a few thousand francs.

This couple doesn’t have a car. Add 500 francs per month at least for the cost of the car, parking, gas and insurance– and that is a modest estimate. So, if they have a car, they pack their lunches and pay less for lunch but their grocery bill goes up. They haven’t paid the church tax to an official Swiss church (much more than 10 francs per week) because they attend an Anglophone Episcopal church in Geneva and put some money in the plate. They haven’t made any charitable contributions to Red Cross or such. Where is the money for vacation? Not much left with some 2100 francs per year. What about the baby clothes and pram? How about a ski weekend here or there? What about trips to the “homeland”. Forget it.

Oh, and Mr. Johnny Gringo becomes Swiss. He is now 28 years old. He pays about 1500 francs for the whole process. (Naturalization fee, plus all of the fees for the documents that he has to present, fees for new arrival in Geneva–wife is from the Swiss Canton of Vaud so he needs to reregister himself as a non-Genevan resident of Geneva, passport and ID fees). At the end of the year, guess what, he gets his draft book stamped “NOT CONSCRIPTED”. He is considered too old to start out as a recruit. Violà= bill of 1500 bucks more per year until age 31 for the military.

We haven’t considered another possibility. This is the real 2012 universe and the FEIE hasn’t been repealed (yet). Mr. Gringo got laid off from his job in Geneva. The unemployment office pays him 77,000 for a year. This is unearned income, so the FEIE doesn’t apply. Now has to pay USD 15270 in US taxes with only about CHF6000 in Swiss taxes to set it off. His tax bill is 1310 per month instead of 1824. Result, even if we convert lunches to grocieries at a lower rate, the couple is pretty much in the red, because he is also earning some 1600 less per month.

Swiss law states that Mr. Gringo has to look for work within 4 hours round trip of his residence, or lose his benefits. After a year, Mr. Gringo has only 6 months left on his unemployment benefits, and he manages to find a job in Lausanne that is more challenging and better paid but there are commuting costs involved. Mr. Gringo goes to work for a company in Bussingy Vaud, earns 30k more and the train/bus connections are not so hot so he buys a car. His hours are variable and sometimes he has to stay late or come early to have phone calls with other time zones. He is able to deduct the 30kCHF from his taxes in Geneva, as this is what his kilometer-based commuting expenses come to, so he still basically pays CHF 12023 in Swiss income tax as before. The 30k bascially goes for the purchase of the car amortised for the year over 6 years, gas and insurance. This is the real 2012 universe so we can write off his original 90k-odd income via the FEIE. But now he’s got 30k more not covered by the FEIE, and not taxed by Switzerland because Geneva allows deduction of commuting expenses (the US does not). That 30k is taxed between the 28% and 33% tax brackets in the US. Oops, now Mr. Gringo is NEGATIVE 10 grand per year. He is now earning less than before, and can’t even pay the bills. Then the baby comes. 2013 has already come and gone and 2014 is well underway and FATCA is starting to catch up with them.

Mrs. Gringo gets her account at Raifeissen cancelled because Mr. Gringo had signatory authority on it and the bank caught on. She is forced to sell her stocks at a loss. Mr. Gringo gets screwed around by another bank and has to bank in the Canton of Vaud at a smaller bank who only takes him because he has become Swiss. Then they discover that they were never tax compliant because they didn’t count the employer’s pension contributions as taxable income in the US. There is no money left each month after paying basic expenses to survive, and now they are in debt. The family allocations they now get for the baby are taxed by the US as unearned. The rent and health insurance go up a few hundred a month. Mr. Gringo’s company isn’t increasing salaries and bonus was nonexistant this year.

Mr. Gringo checks with the US consulate. The waiting list for renunciation is 1 year. He is not sure that he wants to give up US citizenship either and doesn’t see how he can survive in Switzerland under this double tax regime. Mrs. Gringo goes apeshit. She divorces Mr. Gringo, who finally flees to the US because he can’t make ends meet anymore. He now lives in a tiny appartment in New York with the IRS on his back, and oh, there is still the Swiss military tax to pay, and he didn’t know that New York wanted to tax his Swiss earnings as well (he grew up in New York and was resident there before moving to Switzerland with his wife who had studied in New York). New York is trying to screw him for taxes, and is even trying to go after ex-Mrs. Gringo as somebody found out that they had a standard communal property marriage. (The Swiss divorce court, in its ignorance, didn’t take into account the double tax liability). And Ex-Mrs. Gringo is now on welfare in Geneva because Mr. Gringo can’t pay the child support and she can’t find a good enough job that would cover child care, and what’s more is cronically depressed that all of this happened.

She writes the New York congresscritters, who tell her to buzz off because she is not American. She writes her swiss deputés, who snub her. She is ruined. She is now 30, has finished her education, but is essentially unemployable. She will likely never be able to work in Switzerland as she has little work experience, and if she can’t get child care now, she certainly isn’t going to get any experience before she is too old.

The Swiss bill collectors are pounding on her door for unpaid taxes and health insurance. The state of New York is even trying to collect from her via the Swiss debt collection authorities. The IRS is calling her every other week. Mr. Gringo forgot to un-register himself from Geneva so even though they are now divorced, the Swiss police are knocking on her door because he has been taxed automatically by Geneva (“taxation d’office”) as if he still had the same job, and they want to know where the hell he is, after all, he is Swiss. Mr. Gringo tries to write the Geneva autorities to get them to stop, but they are asking him for a document of population office registration in New York, which he does not have, because this does not exist in New York, all he has are his tax returns from his new job in New York. He gets responses back in French that he doesn’t understand because his wife always filled out the taxes in Switzerland.

Why has all of this happened? Why was this young couple destroyed? American extraterritorial hubris and Swiss authorities and parliamentcritters who lack nuts and conviction.