Coincidentally, on the same day that the latest Federal Register “published expatriates” list finally came out, the Washington Post “In the Loop” blog reports that Tina Turner has finally visited the U.S. embassy in Bern to sign her DS-4079 to confirm that she naturalised as a Swiss citizen with the intention of giving up U.S. citizenship. (No doubt the latter news will overshadow the former, and I fully expect that in the coming days some newspapers will mix up the two news items and erroneously report that Tina Turner appeared in the list.)

Anyway, the news of Tina’s relinquishment comes straight from the horse’s mouth — an embassy “activity report” (but not a public one?) — and is likely to be quite accurate, but the Washington Post wrote something else that comes from an anonymous and entirely misinformed reader:

The key word in the embassy report apparently is the term “relinquishment.” That means, a knowledgeable source told us, that she did not “formally renounce her U.S. citizenship under 349(a)(5) Immigration and Nationality Act, but took Swiss citizenship with the intent to lose her U.S. citizenship.” As opposed to formal renunciation — a much more complex process, we were told — there are no “tax or other penalties for loss of citizenship in this fashion.”

Writer Al Kamen was probably anxious to get the news out, but he was right to hedge this un-fact-checked quotation with “apparently” and “we were told”. (Update, 14 November: he has since issued a correction.) A reading of the actual text of 26 USC § 877A — the portion of the Internal Revenue Code which imposes the “exit tax” on newly-minted ex-citizens — confirms that the “knowledgeable source” is incorrect: the tax consequences are the same whether you renounce citizenship, relinquish citizenship, lose citizenship by court-ordered denaturalisation like an ex-Nazi, or even give up your green card when you were never a citizen at all.

END_OF_DOCUMENT_TOKEN_TO_BE_REPLACED

Further to my post last Sunday here at IBS, SWAT–Switzerland IGA: Still not enough information available in Switzerland, I received a reply email from the Swiss State Secretariat for International Financial Matters (SIF) yesterday. I stand corrected: it seems that I didn’t search hard enough on the Swiss Federal Authorities site (admin.ch) and that not only the agreement text is now available in Swiss national languages, but also a “law of application” has been drafted to enforce the agreement. From what I understand, Parliament will be formally informed of the package to vote on by 15 March 2013, but is not expected to vote on the issue until next summer. It would appear that the Cantons, Communes, Political Parties, etc. are expected to provide feedback by 15 March and this feedback will go to Parliament in some formal fashion, but of course this does not preclude lobbying directly to deputies outside of the formal consultation procedure between now and the vote next summer.
END_OF_DOCUMENT_TOKEN_TO_BE_REPLACED

Hot off the Treasury web site.   Switzerland capitulated!  Canada next?

2/14/2013 ​
WASHINGTON – The U.S. Department of the Treasury announced today that it has signed a bilateral agreement with Switzerland to facilitate the implementation of the information reporting and withholding tax provisions commonly known as the Foreign Account Tax Compliance Act (FATCA). END_OF_DOCUMENT_TOKEN_TO_BE_REPLACED

Americans, green card holders and non-US spouses of USCs received W9s, as well as a form which indicates they agree they will not receive protection under Swiss data laws for the information “requested or required by the IRS.” The explanation given was that FATCA begins January 2013. I wonder if they simply decided to go ahead in spite of the extension to 2014 or if it is a gigantic case of CYA in advance. The extra form suggests that this practice would normally violate privacy laws, but I don’t know if that is true or not.

Interestingly, the article states UBS previously asked USCs to tick a box, indicating their citizenship.  Do any of our Swiss posters know when this began? I am curious if was a regular practice or something that appeared after the 2009 debacle.

The clients have until March 31, 2013 to comply. If they do not, ” “UBS will be obliged to end its business relationship with you.”

“The letters and forms are to be returned to UBS wealth management offices in different parts of the country, the bank unit handling the paperwork. This detail could  have implications later for those who do sign the forms.

Bank employees advising clients who receive the letters have said that while, for now, UBS has opted not to refuse American clients, at some point in the future these clients may have to foot the bill for the higher cost of handling them.”  It is interesting that individual USCs may be required to shoulder the costs as opposed to the bank spreading them out to all clients. I wonder if this will become a practice across the globe. If so, it will put a dent in the idea that other nationals will be outraged by being charged and demand that FATCA or the IGA be refused/rescinded, etc.

I am not familiar with Swiss law and don’t quite understand why signing a document which is open-ended (timewise) may cause legal problems. Again, would welcome comments from our Swiss Brockers that would educate us as to what type of privacy laws there are in Switzerland as well as any other info that would shed some light on implications for the future. 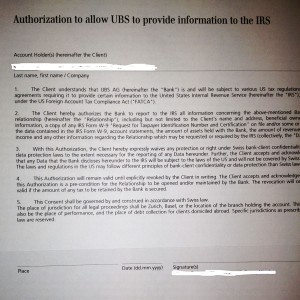 “With this Authorization, the Client herby expressly waives any protection or right under Swiss bank-client confidentiality and data protection laws to the extent necessary for the reporting of any Data hereunder. Further, the Client accepts and acknowledges that any Data that the bank discloses hereunder to the IRS will be subject to the laws of the US and will not be covered by Swiss law.”

In ZURICH — For decades, Switzerland was the place where money went to hide. Cash sent to its mountain aeries was protected by some of the strictest secrecy laws in the world.

But with the euro crisis forcing Switzerland’s revenue-starved neighbors to search out new sources of money, the Alpine country’s bank vaults are suddenly looking irresistible. In recent months, the nation’s strict banking secrecy has been under assault from countries such as Germany and Britain as never before. Experts say the last veils may soon be dropped altogether, bringing the hush-hush tradition to an end.

Not quite sure of the accuracy of this report, since it comes second-hand in what appears to be a letter to the editor, but this woman seems to be saying that a Swiss man she knows — an “accidental American” — went into the OVDI and then had his U.S. passport confiscated for some reason. From The Record–Searchlight of Redding, California:

We have Swiss friends, a couple, who lived in the United States in 1966 and 1967. He was a young engineer working here to get some experience in his field. While here, they had a baby boy who then of course was a U.S. citizen … He was recently informed that he now must start paying taxes and filing tax returns to the United States. Not knowing the U.S. tax code, he asked for help from the U.S. Embassy and was told that he needs to hire a lawyer for help. I imagine it has to be an American lawyer or one who understands the tax laws here. There will be cost to this service he has to pay. I assume the Internal Revenue Service wants to know about his “secret Swiss bank accounts”? Also, he has to produce bank information for the last six years. His U.S. passport was taken away.

I am thinking that people should be weary of “dropping babies on the U.S. soil” if they do not plan on staying here permanently.

Not sure what this means — perhaps he renounced, or perhaps someone in the bureaucracy nabbed his passport ultra vires. But whether or not she’s got some of the details about her friend’s son’s story muddled, her closing warning is a sound one. Good to see that at least one Homelander gets it. Sadly, many people in the comments section clearly don’t want to listen.

Amy Webster, a communications specialist who lives in Morges, Switzerland shared her FATCA fallout story recently on the Genevalunch blog.  The link to her story was in one of the comments posted here on Isaac Brock.  I have been in contact with her via email, and obtained her kind permission to also cross post it here for additional visibility.  She said, “By all means, my story has gone public, so please feel free to do what you wish with it, as long as it can help our cause!”  Her story follows: END_OF_DOCUMENT_TOKEN_TO_BE_REPLACED

Maybe.  That is what the Bloomberg Business Week Headline says. Since this is a story about Switzerland, it is a good attention catching headline which plays upon a bias that all Americans living in Switzerland must  be wealthy.  Or,  I would bet, it is an editor choosing a title to catch attention.  That is what they do!  I thought I would post it, in case some of you have not yet seen the story. I also wanted to point out that Andy Sundberg has been prominently mentioned at the beginning of the article. END_OF_DOCUMENT_TOKEN_TO_BE_REPLACED

The news of a deal between the 5 major EU governments and the US regarding FATCA came as a major shock to many, including myself, last week.  I have now come across news that the EU, now bolstered by the US drive to implement FATCA, has on its agenda to really join US pressure and try to “break Switzerland” as I like to say.  On the forums I have also come across posts which have implied that Russia and China are probably not going to resist FATCA either.  See everything below.

European Deal could double the pressure on Switzerland with the EU joining the US in violating Swiss sovereignty: