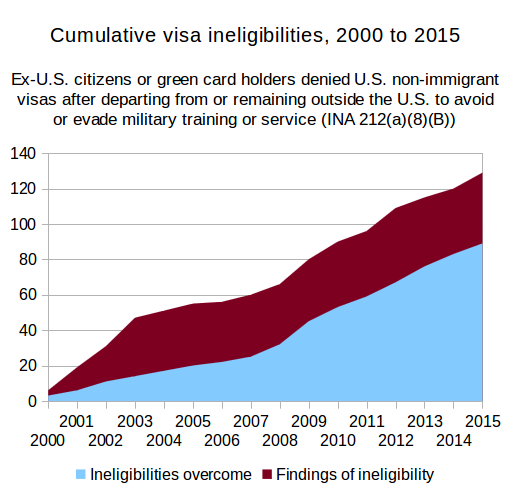 According to Department of Homeland Security statistics, from 1986 to 2013, more than three thousand people born in the U.S. obtained U.S. green cards, with the level in the past five years rising to roughly 230 per year after a long decline in the 1980s and 1990s.

Some of these (at least a few hundred, and possibly many more) are U.S.-born children of diplomats, who don’t receive U.S. citizenship at birth, but can apply for green cards fairly easily. However, it’s certain that former U.S. citizens by jus soli are also present in these statistics — there have been a few cases documented in the media, though the total number is unclear.

In any case, given that tens of thousands of American emigrants gave up their citizenship during that same period, it seems the “reverse migration” rate from among that group is not very high (though of course, some ex-U.S. citizens obtaining green cards may have been born in other countries, and so wouldn’t show up in these green card statistics).

END_OF_DOCUMENT_TOKEN_TO_BE_REPLACED

On Friday, the State Department released one of the remaining missing sections of the Report of the Visa Office for Fiscal Year 2014: Table X, “Immigrant and Nonimmigrant Visa Ineligibilities (by Grounds for Refusal Under the Immigration and Nationality Act)”. For our purposes, this is interesting because of its statistics on two particular grounds of ineligibility which apply to emigrants: 8 USC § 1182(a)(8)(B) (“Draft evaders”) and § 1182(a)(10)(E) (“Former citizens who renounced citizenship to avoid taxation”).

The latter ground, the infamous Reed Amendment, is not known ever to have been enforced officially, though oddly enough this year’s Table X does not give us the number of determinations of ineligibility for a non-immigrant visa under the Reed Amendment: unlike in past years, the table entry is blank. It is not listed as a dash, which is used in the report to indicate that a particular ground of ineligibility doesn’t apply to non-immigrants; there’s simply no symbol in that row & column of the table at all. (The last time the report failed to include the Reed Amendment, in 2003, there was simply no row in the table at all; this time, however, the row is present, it’s just that the non-immigrant column is blank.) I have no idea what this might mean.

One thing Table X does show is the continued decline in enforcement of the former ground: only about half a dozen to a dozen people per year are being found ineligible for visas on draft-related grounds, and in recent years nearly all of them have been able to overcome their ineligibility upon review. However, despite Jimmy Carter’s pardon back in the 1970s, the number of people unable to overcome their ineligibility is not zero.

The ban on re-entry for people who left the U.S. as draft evaders or deserters is rooted in a much older Civil War-era law which stripped such people of their citizenship and made them ineligible for naturalisation. At the time, the U.S. had very few immigration controls, but by the 1920s, new immigration laws began placing barriers in the way of entry of all aliens ineligible to citizenship, presumably including draft evaders & deserters. These banishment provisions were made explicit in the Immigration and Nationality Act of 1952, and even survived the Supreme Court cases Trop v. Dulles in 1958 and Kennedy v. Mendoza-Martinez in 1963, which declared the nationality-stripping provisions for desertion and draft evasion respectively unconstitutional.

END_OF_DOCUMENT_TOKEN_TO_BE_REPLACED

As Patrick Martin, Phil Hodgen, and others have pointed out, if you previously immigrated to the U.S. as a legal permanent resident (LPR, “green card holder”), the IRS considers you a U.S. Person for tax and asset-reporting purposes even if you’ve left the country. Per 26 USC § 7701(b)(6), the only way this changes is if you either take a treaty-based return position that you are a resident of another country, or get a determination from USCIS or a court that your LPR status is gone. You usually do the former by filing IRS Form 8833. You usually get the latter by filing USCIS Form I-407 or by being deported.

Absent that, you remain a “U.S. Person” even if your green card expires or you’ve been out of the country so long that it’s clear you’ve abandoned your residence in the United States. In other words, you are a resident of the U.S. for tax purposes, but not for residence purposes. How many people are stuck in this tax limbo? The Department of Homeland Security estimates that more than 1.3 million LPRs moved out of the U.S. from 2005 to 2012. Generously speaking, perhaps six hundred thousand took action during that period to retain their green cards by applying for re-entry permits from USCIS (whether or not they knew about the tax consequences of keeping their LPR status). Another 115,000 actually filed Form I-407 to cancel their green cards; there appear to be a similar number of Form 8833 filers and deportees.

That leaves possibly as many as half a million emigrants who no longer have any right of residence in the U.S. but remain subject to that country’s worldwide “citizenship-based taxation” net.

END_OF_DOCUMENT_TOKEN_TO_BE_REPLACED

Elaborating further on the issue, Mr David Agorsor, Director in Charge of Migration Unit of the Ministry said majority of the applicants were health professionals, especially doctors and nurses … He explained that, such people renounced their Ghanaian nationality because they are mostly offered job opportunities in those countries which do not recognize dual citizenship.

Meanwhile, Reed Amendment author Jack Reed is apparently frustrated by the repeated failure of his more recent attempts to ban even more ex-citizens. And perhaps he’s still stinging from Daniel Moynihan’s October 1996 speech deriding his legislative drafting skills. So he’s used his position on the Senate Appropriations committee to get the following language inserted into the report on the latest Department of Homeland Security appropriations bill:

Under section 212(a)(10)(E) of the Immigration and Nationality Act, the Department of Homeland Security has the authority to deny admission to former U.S. citizens that are deemed to have expatriated for purposes of tax avoidance. In over a decade, the Department has not issued regulations nor has it undertaken any significant steps to enforce this provision. The Committee directs the Secretary to report within 90 days on the steps the Department is undertaking to enforce this law, including a schedule for issuing guidance or regulations, if necessary.

END_OF_DOCUMENT_TOKEN_TO_BE_REPLACED

“I hereby declare, on oath, that I absolutely and entirely renounce and abjure all allegiance and fidelity to any foreign prince, potentate, state, or sovereignty of whom or which I have heretofore been a subject or citizen.” That’s the end of the story, right?

Not really. U.S. law does not apply in the other 190-odd countries and territories on the planet; other legal systems have no obligation to take notice of an oath to U.S. authorities unless their own laws tell them to. And the U.S. government, in practice, does not care if resident U.S. citizens hold other citizenships. (It cares very much whether non-resident citizens hold other citizenships, and demonises it as a method of evading taxes, but that’s another story entirely.) However, some countries of origin do care: their nationality laws prohibit dual citizenship, and require emigrants to report when they have acquired another citizenship so that the loss of their original citizenship can be formalised and recorded. Up until the 1980s, the U.S. also prohibited emigrants who naturalised elsewhere from retaining U.S. citizenship.

What’s the rate of compliance with these single-citizenship laws? Not very high; perhaps half at most, judging from Japanese and South Korean data. In a minority of cases, failure to report your new citizenship to the government of your country of origin may indeed represent an attempt to game the system. However, in most cases, it’s simply due to benign neglect: you are no longer under the jurisdiction of the “old country”, and have no future intention of exercising any rights there, so you don’t bother with the rules of their system. And of course, civilised countries do not presume guilt in such cases, nor impose life-altering fines on emigrants for failure to comply with obscure paperwork.