I am making this comment by Orwell into a separate post so that it doesn’t get lost. I think it’s important that Americans abroad do everything they can to make their voices/concerns heard.

This is on and off topic. The DemsAbroad recently posted on FB that they condemn the RO and Rand Paul law suit as irresponsible and driven by greed. They proposed their counter approach which is to tweak the FATCA so as to harm less – I suppose in much the same way that FEIE squelches the voices of dissent with targeted complacency. People responded that the real problem is CBT and DA further stated that this is not the issue at hand, but for the record they have been opposed to CBT since 1992. After 23 years of opposition with less than nothing to show for it (the Dems are the greater evil of the two parties against US Persons Abroad), the DA have just proved that they are irrelevant in their own party.

Their only purpose is to get-out-the-vote. The party will patronize them at its pleasure.

Meanwhile, the RO have seized an historic moment with the lawsuit by taking an unorthodox and bold approach to reach out to US Persons abroad to say to them “we support you”. This is not “we hear you”. It is much stronger. But even “we hear you” would be a first for us. Which brings me to my appeal:

There is a web site that tracks public opinion about pending legislation in the US called popvox. I was told that it gets the attention of members congress, especially when there is a large volume of activity around a piece of legislation.

There is a bill H.R. 3078 proposed by Caroline Maloney (D-NY) and Mike Honda (D-CA) for congress to study the impact of legislation on Americans Living Outside of the US. This was recommended to a friend on Facebook and when I went to the site, it had only 4 votes; 2 for and 2 against. I asked my friend to post an appeal on FB to get people to go to the site and vote for it. It is now 35 for and 3 against.

One of the myriad excuses that Congress, their controlled press and the US Govt use against US Persons Abroad is that the problem is isolated and small: e.g. 3,000 people renouncing each year out of 7.6 million is nothing; and 376 stories of pain and tragedy over “is no crisis”.

As we all know, we are not part of the US community and makes us fair game (“if you are not at the table, you are lunch” — Billy Tauzin). Even when we make our voices known, the very same people who admonish that the US is a democracy and its people have the right to change the laws, minimize and crush our voices.

If this simple legislation is approved, it will force the USG to do an evaluation of the pain inflicted on families all over the world with data that they, themselves commissioned and vetted. It would take away the convenient excuse to look the other way while continuing the infliction. Unless, of course, the legislation is used to prove that the disenfranchisement is indeed insignificant. But if the legislation is never passed, the American people can return to the hollow comforts of their willful ignorance.

A total of 38 voices seems nothing and can easily be swept aside by Congress and their allies in the US press. I note that at this point, the H.R: 3078 has the highest level of the participation and our appeal on FB is not even 24 hours old. On top of that, it has not yet seen the familiar faces of the IBS.

My dream is that the site will see 7.6 million votes (up or down – it does not matter). It will be the loudest voice that web site has ever seen. The message is clear – “we are here”.

Here is the link:
https://www.popvox.com/bills/us/114/hr3078
Unfortunately, you have use a US address to register – irony indeed… If you don’t have one, then use the address of your representative’s office and say that you’ve done this and why, so that they will not see it as a prank.

Please, do your best – use e-mail, friends, social media, to appeal to the few in the homeland know that we exist, who care about us and know our suffering. After you make your appeal to your friends, thank them when the numbers go up and then give them periodic updates to let them know how we’re doing.

I know – this vote does not mean anything either. It will be so easily dismissed because there is no validation of identity or authenticity. However, just the fact that we blew the roof off the site will get attention. 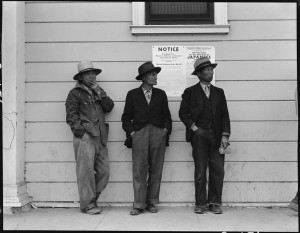 Seventy-one years ago today, Franklin Roosevelt signed Executive Order 9066, paving the way for the internment — without due process of law, nor the consent of the legislature — of 120,000 people of Japanese descent.

Most of us are familiar only with modern-day attempts to get Americans to report non-US accounts and investments: the controlled foreign corporation laws of the 1960s, followed by the Bank Secrecy Act of 1970, and today’s FATCA. But three decades before TD F 90-22.1 and seven decades before Form 8938, there was WRA 126, “Application for Leave Clearance”, which had to be filed by any Japanese American seeking to leave a War Relocation Authority internment camp. This form is most famous for its questions about swearing allegiance to the United States, serving in the U.S. military, and foreswearing allegiance to Japan — earning it the “loyalty questionnaire” nickname, but it also asked about more prosaic matters:

15. Foreign travel (give dates, where, how, for whom, with whom, and reasons therefore).

END_OF_DOCUMENT_TOKEN_TO_BE_REPLACED

The Congressional Progressive Caucus’ “Budget for All”, which would have repealed the Foreign Earned Income Exclusion, was voted down by 78–346 last week. It was formally proposed as Amendment 4 to H.Con.Res. 112; OpenCongress.org has the roll call. The House passed Paul Ryan (R-WI)’s budget instead. However, regardless of the failure of the “Budget For All”, Americans Abroad Caucus members who voted in favour of it still owe an explanation to U.S. persons abroad.

END_OF_DOCUMENT_TOKEN_TO_BE_REPLACED

Last week, a number of Democrats in the U.S. House of Representatives, including more than a third of the putative members of the Americans Abroad Caucus, co-sponsored the introduction of HR 14, the House version of the Senate “highway” bill S 1813 we discussed earlier. That bill included provisions to let the IRS revoke or deny issuance of a passport, and also to give the U.S. Treasury the authority to illegalise credit cards from banks which they feel are “uncooperative” with the U.S.’ attempts to tax the whole world.

In a comment, Just Me points to some temporary good news: instead of voting on HR 14, House Republicans instead pushed through John Mica (R-FL)’s three-month highway-funding extension bill HR 4281, the ninth extension of the Bush II-era SAFETEA-LU act.

END_OF_DOCUMENT_TOKEN_TO_BE_REPLACED

The Congressional Progressive Caucus, one of the larger Democratic Party caucuses, has proposed to end the Foreign Earned Income Exclusion in their 2013 “Budget For All”, details of which were revealed yesterday following a vague press release last week. As U.S. persons abroad have already learned, when American homelanders use words like “all” and “us”, we are decidedly not included, except when they want money from us. Indeed, with this latest budget proposal, even members of the Americans Abroad Caucus have come out in support of eliminating the FEIE.