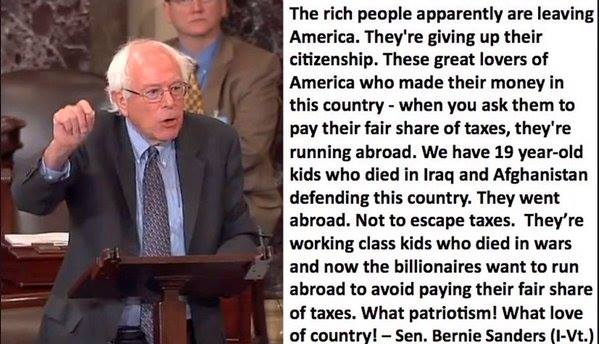 I’ve noticed that some of the people on Facebook really like Bernie Sanders. But let’s make one thing clear: this senator is a demagogue:

I have myself given up US citizenship. I know lots of people personally who have given up US citizenship. I do not know a single billionaire. I am not a billionaire. I did not leave the United States to avoid paying taxes. For crying out loud, I live in Canada where taxes are much higher than they are in the United States. This man has vilified me and others like me who have become targets of the Obama administration of exorbitant fines, destroying our rights of due process and presumption of innocence.

We should remember that the colonists felt that it was unfair that Britain tax them and that is why they led a revolution and gained the independence of the colonies, thus creating the United States of America. Bernie Sanders may not realize it, but the current policy of the United States towards expats is ten times the son of the Devil what British taxation policies were against the colonists. Most of us who have relinquished US citizenship are victims not villains.

Like Loading...
« Should a Canadian be forced to fill out W-8BEN to avoid losing her right to trade in her Canadian brokerage account?
The US government hunts down Expats to pay taxes–meanwhile the Clintons are cashing in »

63 thoughts on “Bernie Sanders: Demagogue of the Senate”