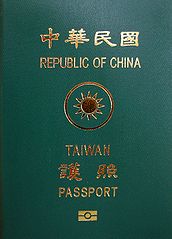 The current Article 11 of the Nationality Law of the Republic of China, which covers the right of nationals to voluntarily give up their nationality, gives parents the right to decide their children’s nationality. (If a child disagrees with the parents’ decision, he or she can personally apply for restoration of citizenship under Article 15 at at any time following majority.) The Ma administration’s draft nationality law amendments first floated in March 2012 include a proposal to extend this principle to all persons without legal capacity, including adults. (Brockers have long expressed concern about the lack of a corresponding right in U.S. nationality law.)

Specifically, the administration’s amendment would add the below-underlined Subparagraph 1 to Article 11, Paragraph 1 of the Nationality Law:

This has not yet been brought up for a vote in the Legislative Yuan (the unicameral legislature), due to controversy over other parts of the Nationality Law. In particular, protests continued to be held as recently as last week over the ill-defined “good conduct” requirement for naturalisation in Article 3. So far, the proposed amendments to Article 11 have received little attention either in Sinophone or Anglophone newspapers; most attention has been focused on other provisions relating to naturalisation & dual citizenship.

In Taiwan, “legal capacity” is defined in Articles 13 through 16 of the Civil Code. Children under age 7 have no legal capacity, while a court can make a finding of lack of legal capacity for a person with a mental disability. Additionally, children between the ages of 7 and 19 (inclusive) are defined as having “limited legal capacity”, though if they marry they are thenceforth considered to have full legal capacity. (Article 972 imposes a minimum age of marriage of 18 for boys and 16 for girls.)

Under the original version of Article 11 of the Nationality Law, passed way back in 1929 when the Republic of China still controlled the mainland, a person applying to lose nationality had to be at least 20 years old and have full legal capacity. In 1952, a few years after the ROC government relocated to Taiwan, the Judicial Yuan issued a ruling (台電參字第383號) that the law as it stood then did not allow a parent or other legal agent to apply for loss of nationality on behalf of a child or other person without legal capacity.

This remained the situation until the 2000 nationality law reforms, when Article 11 was updated to provide that if a parent applied for loss of nationality, the children could also concurrently lose nationality. However, the present law does not cover adults who lack legal capacity; the proposed amendment would fix this situation. The Ministry of the Interior’s statement of reasons for introducing this provision makes clear (well, as clear as bureaucratese can be) the link to human rights and the best interests of the person.

When the Legislative Yuan first debated the various Nationality Law amendment proposals back in April 2013, the proposed amendment to Article 11 was apparently regarded as non-controversial, and wasn’t even mentioned. In the most recent committee meeting in December 2014, Article 11 was barely mentioned either — it got a grand total of one line in the minutes (at page 4), saying only that the committee had decided to approve the administration’s proposal on that article (“第十一條，照行政院提案通過”).

Similar provisions in other countries

Germany’s Nationality Act provides (according to the translation on the website of the Federal Ministry of the Interior):

(1) Application for the release from citizenship of a person in parental custody or in the care of a guardian may be filed by the legal representative only and shall require approval from the German family court.
(2) The approval of the family court shall not be required where the father or mother applies for release from citizenship for himself or herself and for a child at the same time by virtue of the right of custody and the applicant is entitled to custody for the child concerned.

44A Waiver of requirement for full capacity

Where a provision of this Act requires an applicant to be of full capacity, the Secretary of State may waive the requirement in respect of a specified applicant if he thinks it in the applicant’s best interests.

In countries which offer diaspora visas or allow former citizens to apply for restoration of citizenship through a simplified procedure, the right of an adult to relinquish citizenship on behalf of children generally does not conflict with the right of the children to determine their own nationality & residence upon reaching adulthood. Even if the parents relinquish the citizenship on the child’s behalf during minority, the child can move back to the country of former citizenship and/or apply for restoration of citizenship. Similarly, if a guardian relinquishes citizenship on behalf of a legally-incapacitated adult who later regains legal capacity (e.g. emerges from a long-term coma and regains full brain function), the adult can obtain residence or citizenship again the same way.

For example, Germany’s nationality law provides (same translation as above):

1. possesses legal capacity pursuant to Section 80, sub-section 1 of the Residence Act or has a legal representative,
2. has not been sentenced for an unlawful act and is not subject to any court order imposing a measure of reform and prevention due to a lack of criminal capacity …

A former German and his or her minor children who are ordinarily resident abroad may be naturalized on application if they meet the requirements of Section 8, sub-section 1, nos. 1 and 2.

Taiwan’s nationality law has analogous provisions, though they are more restrictive:

The U.S. also has provisions on restoration of citizenship (8 USC § 1483(b)), although they’re even narrower: a minor who lost U.S. citizenship can apply to regain it only within six months of turning 18. Furthermore, the State Department has basically made this section of law into a dead letter by refusing to let minors give up citizenship in the first place, as Phil Hodgen has previously described. Precisely because of the link between citizenship and taxation (and the associated extraterritorial asset reporting & its associated fines), the public and the government would likely be unwilling to expand the existing provisions on restoration of citizenship, since they perceive that the diaspora would “abuse” these provisions in order to avoid the “duties of citizenship”.

As a result, under the U.S. system, the only way to ensure some children’s right to retain U.S. nationality is to disallow the parents from relinquishing it on the child’s behalf. This prevents other children from exercising their own rights, such as obtaining the nationality of their country of ordinary residence (if that country forbids dual citizenship and doesn’t allow minors applying for naturalisation to wait until adulthood to give up their other citizenships — this is currently the case in Taiwan, though the above-mentioned administration proposal would change this as well). It also imposes extra burdens on the parent and thus the exercise of the right to family life.

In short, the U.S.’ need to enforce diaspora taxation and punish ex-citizens leads to this inferior legal kludge, whereas other countries can simply use their procedures for restoration of citizenship to ex-citizens in order to ensure that parents can decide the nationality of their children in their minority while the children themselves can make their own decisions on those same matters in their majority. And then, the treatment of children extends to other people without legal capacity as well.