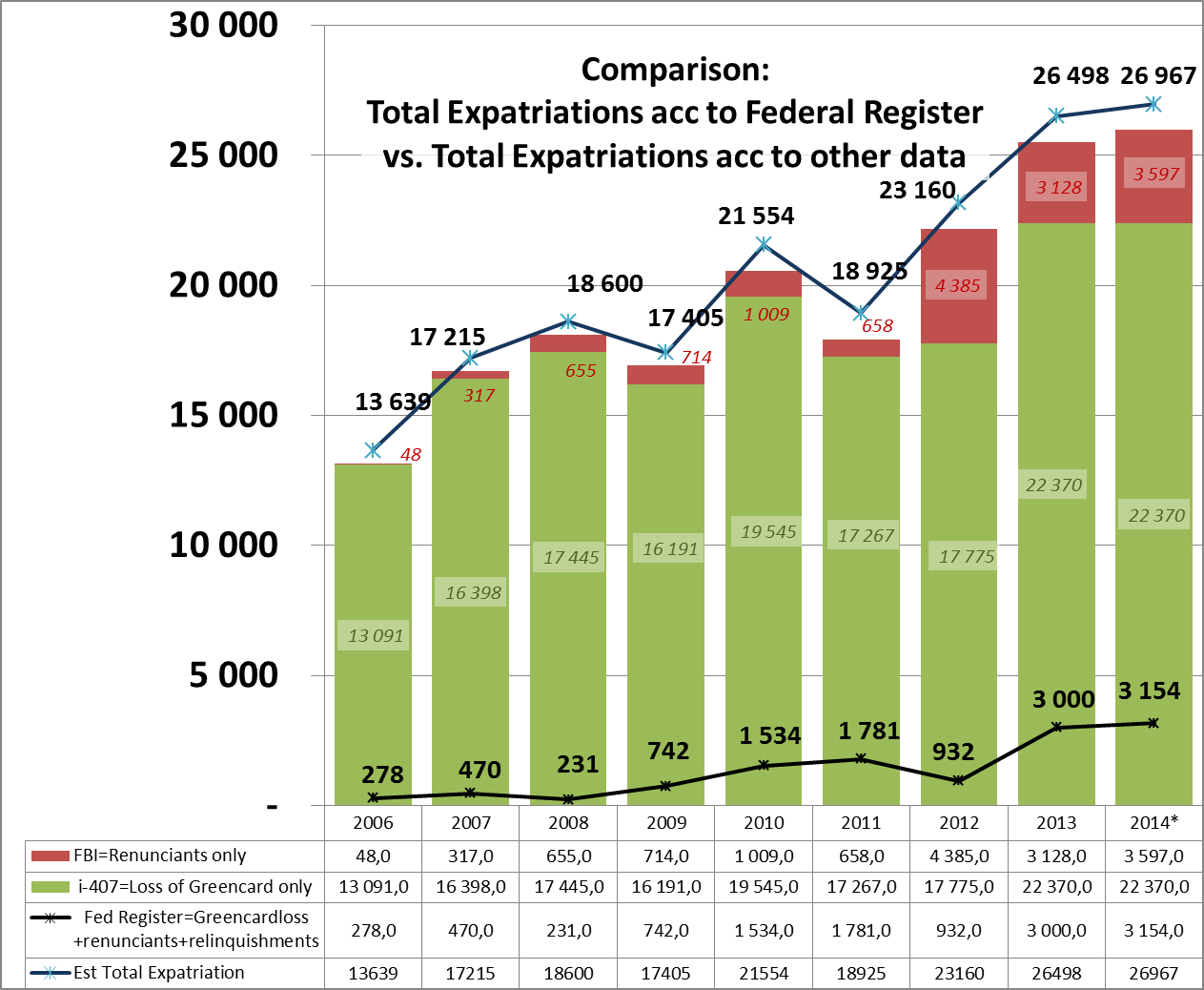 Are US Refugee statistics correct?

Hmmm. What’s up here? Does 2+2 = 32? Why are the US Federal Register published statistics off by a factor of 8? Is this “truth”? Is this “competence”? Is this “leadership”? Is this “‘information’ for ‘formulating an opinion’?” What kind of opinion is meant to be formulated with this kind of “information”?

Federal Register Statistics (the ones published all the time, shown as the black line in the graph):

Let’s look at what the Federal Register has reported, as acquired from Wikipedia’s “The Federal Register Quarterly Publication of Individuals Who Have Chosen to Expatriate” (source referenced “A” below). This is a list which supposedly reports the quantity of Expatriating individuals from USA–the number is supposed to include 1) renunciants, 2) relinquishers, and 3) those long-term residents who have terminated their visa’s  (“this listing, long-term residents, as defined in section 877(e)(2), are treated as if they were citizens of the United States who lost citizenship.” (“A” & “B“))

FBI statistics of renunciants only (red bar on the graph)

A database of those who have renounced their US citizenship exists at the FBI. This is a result of the Brady Bill which disallows renunciants from purchasing firearms. To meet the intent of that act, the list only holds the category of renunciants. Let’s make the assumption that the FBI is both correct and honest, and use it’s renunciation data with other newly data. (See references “D“, especially the first)

Loss of Long-term visa status, I-407 (shown by green bars on the graph)

The final category of expatriation is those who have held green cards. In order to be completely final of US personhood, a green card holder must file the I-407 IRS form which states that he is terminating his visa status.Only recently has a list of those terminating their greencard status with form I-407 been released.  (see reference “C“)

Therefore, with correct statistics, it should be able to add the FBI list of renunciants (the red bar) to the FOIA list of I-407 greencard turner-in-ers (the green bar, acquired from the FOIA referenced “B”  below.) to make a sum.  This is done by stacking the two bar graphs.

Adding relinquishers to the stacked bars: not available

The quantity of relinquishers is needed to complete the analysis. However, this is not available., hence it is not shown as a stacked bar.  It was assumed that 500 relinquishments occurred per year in the first half of the period of analysis.  1000 per year were assumed for the second half of the period of the analysis.  The assumed numbers are an insignificant portion of the total, and therefore would not negate any conclusions.

Comparison of the two lines

Let’s look at the data in the graph to evaluate the honesty and accuracy of the administration’s Federal Register data.

Whoa! What do we see? The data in the Federal Register is 8 times lower than what it should be. This is an exponential inaccuracy.

What could be the reason for these Executive “inaccuracies”?  A boo-boo? (the proper word for that is incompetence). Round-off errors? (perhaps the figures are meant to be rounded off to the nearest odd 100,000?).

Or is it some other agenda? Is Mythster Robert Stack of the Treasury helping to back up his “and Facts” Sheet? (see refs)

It appears that the quantity of individuals choosing to expatriate has little basis in accuracy. The Federal Register’s expatriation list is known as the “Name and Shame” list, as there is no functional reason for listing the names of persons having renounced their citizenship other than to shame such person. This falls in line with the President’s summer speech where he backhandedly attacked the refugees leaving his FATCA & FBAR dragnet.  He was openly flailing the foreign subsidiaries who are trying to achieve corporate refugee status outside the reach of the US’ extra-territorial taxation system., “…But stopping companies from renouncing their citizenship just to get out of paying their fair share of taxes …”. With this one sentence, the president managed to smear an entire group of refugees leaving USA.

(Lest we not forget–a refugee leaving the US is muzzled from speaking about why–that the FATCA and FBAR dragnets are after him.  If he shall speak, the refugee is automatically labeled a “covered expatriate” and subjected to an automatic 30% exit tax. And, be reminded that the exit tax from the Wehrmacht was only 25%!).

With no access to factual data, one must turn to anecdotal information in order to attempt to pursue a truth.

In Canada and Switzerland, where awareness of FATCA is very high, most embassies and consulates have waiting periods ranging from 2 to 18 months.

see where I originally posted this article (it needs to be updated)
http://bancdelasteroideb612.wordpress.com/2014/10/15/cooking-the-books-at-the-federal-register-what-are-they-really-feeding-you/
*2014 figures were annualized.  I-4017 figures in 2013 were assumed double that as reported for 2013 in the report. I-407 figures for 2014 are extrapolated from 2013 by assuming that they are equal to those of 2013). NICS FBI statistics are acquired from sep 2014 and annualized. Federal Register statistics are from Q1 and Q2 of 2014 and annualized.  I will update the graphs later with the q3 info (I’m on vacation)
.
.
Here is an analysis strictly of the Federal Register Statistics (which are supposed to include renunciations, relinquishments, and I-407 cessation of greencard), versus the FBI renunciations only. It helps to pinpoint why the Federal Register is so far off, and helps to show that the Federal Register does not even match the FBI statistics. 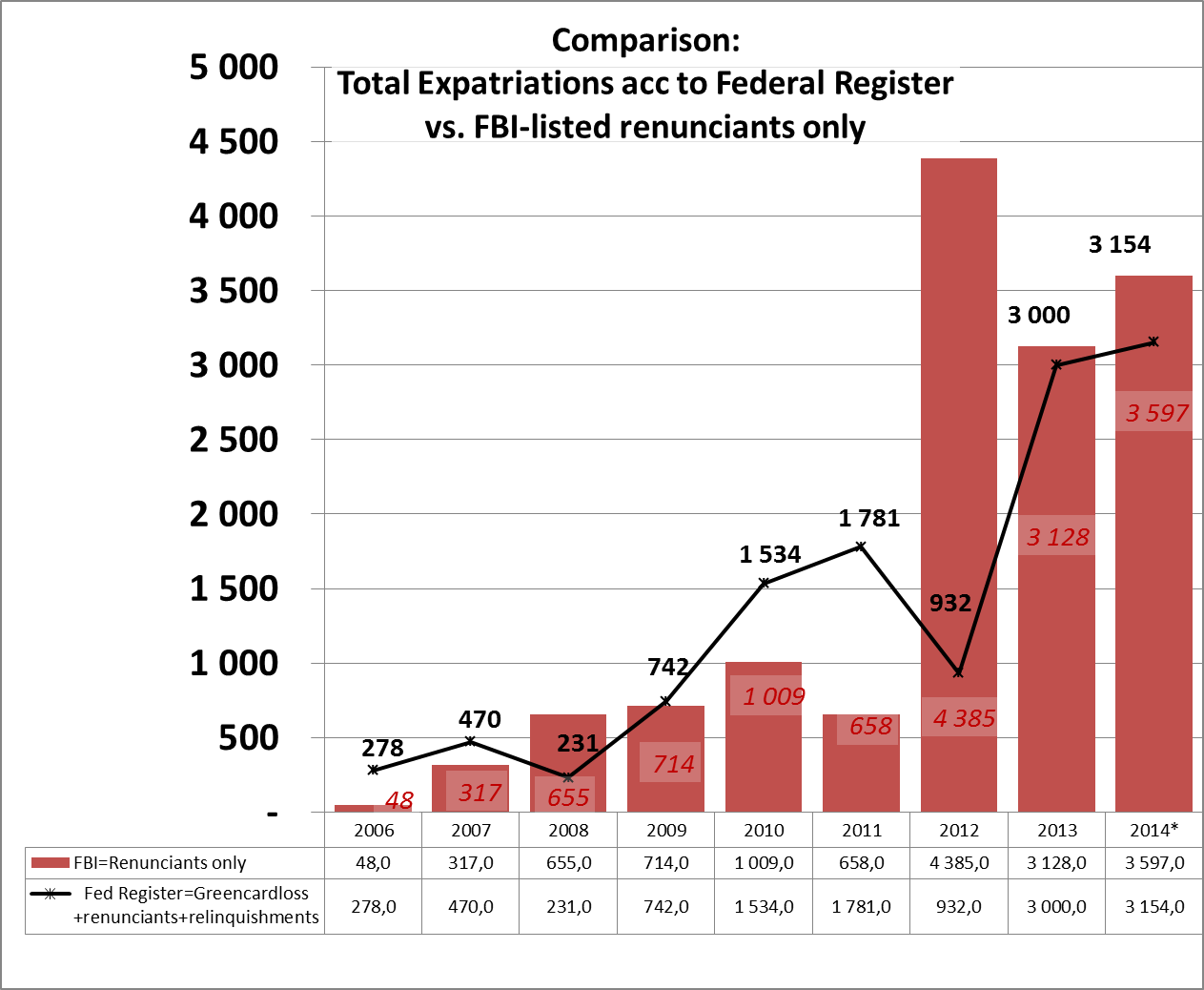 48 thoughts on “Cooking the Books at the Federal Register: What Has the Executive Branch Been Feeding You?”