Blaze has written a FATCA Christmas letter and Wish List to Canada’s Finance Minister Jim Flaherty, who is actively “negotiating” an IGA with the U.S. This was originally posted on Maple Sandbox http://maplesandbox.ca/2013/fatca-christmas-letter-to-jim-flaherty/#comments and is now posted here on Brock: 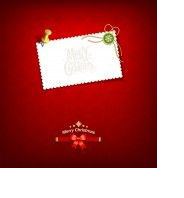 You and your Conservative colleagues have again confirmed Santa’s Canadian citizenship. But, do you know the United States is also claiming Santa as theirs?!? They insist he lives in Alaska—despite his red and white suit and his HOH OHO postal code in Canada’s North Pole.

This is typical of the Americans. They are determined to turn as many people in the world as they can into “US persons.” So they snoop around like kids before Christmas, trying to find loot for U.S. Treasury and Internal Revenue Service.

Don’t let the Americans claim Santa. Don’t let them claim up to one million other Canadians and their families either.

We are as Canadian as Santa. Perhaps even more so because many of us swore an Oath of Allegiance to Canada.

So, I’m sending you this holiday letter to tell you what is on our Christmas wish list (see attached).

We hope you will give us a joyous Christmas by granting our holiday wishes.  If you do, we wish you and your colleagues a very Merry Christmas.

If you don’t, you will subject us to a third Christmas with the IRS Grinch and FATCA Monster threatening to run away with our private financial information on our Canadian earned, saved, invested and taxed money. In that case, we can only wish you a lump of coal in your stocking.

We have been very, very good Canadians. Please don’t be naughty and give away our rights to a foreign government.

We Wish For Protection from IRS Grinch and FATCA Monster

1.  Protection from the IRS Grinch who is threatening our honest lives in Canada with his partner the FATCA Monster.

2.  An assurance from you that all Canadian citizens have the same rights regardless of where they were born.

3.  A statement from you that Canadian banks must follow Canadian laws.

4.  A promise from you that Canadian banking, privacy and human rights laws will not be changed for a foreign government.

5.  Respect from you and the Conservative government for Canada’s Charter of Rights and Freedoms.

6.  A reply to the Open Letter that Maple Sandbox and Isaac Brock Society sent to you exactly one month before Christmas asking a simple question: Do all Canadians have the same rights under Canada’s Charter of Rights and Freedoms.

8.  Assertion of Canadian sovereignty over Canadian laws and Santa’s home in the Arctic.

9.  An announcement that Canada says “NO” to a FATCA IGA that compromises our rights.

Hi folks! I just picked up the flyers and brochure from the printer today!

I had 500 printed up for now. If anyone would like to contribute to the printing fund, please email me directly. You can get my email from Pacifica. I need funds to cover this run and future runs, if people want more printed. If anyone would like me to snail mail some of these existing ones out to them, please contribute toward mailing costs and let me know how many and where to mail to. Any amount will help!

I envision these being handed out to people in bundles of three, as pictured, either on the street during a protest, or door to door when obtaining signatures on the printed petitions for Ted Tsu. I think these should allow people to understand faster than any amount of verbal discussion can. Nothing like a good visual to get people to sit up and take notice! 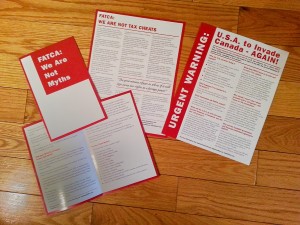 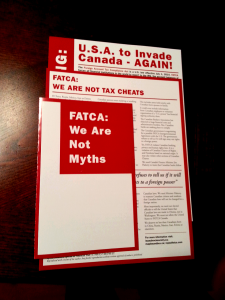