Read it and Weep… What is REALLY in the Canada-U.S. Tax Treaty https://t.co/5MU3tcvfst

The current version of the The Convention Between Canada and the United States of America was signed September 26, 1980.

In Canada, a treaty is not approved per sé by the Parliament. This was somewhat of a surprise to me, due to witnessing the recent chain of events with the signing of the IGA on Feb 5, 2014, watching the (limited) debate process leading up to Royal Assent on June 19, 2014. Given the fact it was very clear the CONs intended to approve it, I had no idea that all they were doing was dealing with the implementation of it. It appears that Canada treated the IGA as if it were a Treaty:

Canada’s Approach to the Treaty-Making Process

After signature of an international treaty, once Canada is ready to be bound by it, a document is prepared establishing that the formalities for the coming into force and implementation of the treaty have been completed and that Canada agrees to be bound by the treaty. More formally, Cabinet prepares an Order in Council authorizing the Minister of Foreign Affairs to sign an Instrument of Ratification or Accession.13 Once this instrument is deposited with the appropriate authority, the treaty is officially ratified. At this point, Canada is bound by the treaty as soon as it comes into force (if it is not already in force).14
In January 2008, the federal government announced a new policy17 to enhance parliamentary involvement in the process by ensuring that all treaties between Canada and other states or entities are tabled in the House of Commons before ratification. The Clerk of the House of Commons distributes the full text of the agreement accompanied by a memorandum explaining the primary issues at stake, including subject matter, primary obligations, national interests, policy considerations, federal-provincial/territorial considerations, implementation issues, a description of any intended reservations or declarations, and a description of consultations undertaken. The House of Commons then has 21 sitting days to consider the treaty before the executive takes action to bring the treaty into effect through ratification or other preliminary measures, such as introducing legislation. The House has the power to debate the treaty and to pass a motion recommending action, including ratification; however, such a vote has no legal force.


One thing that this demonstrates is that Canada most definitely was in compliance with the terms of the IGA on the day it was signed. I am not sure this was known by some members in Parliament. There simply was no need to rush the implementation of the IGA. Why the big hurry? Yet the CONs did this in spite of recommendations to spend more time (as per Prof. Allison Christians, Prof. Arthur Cockfield and John Richardson).

Murray Rankin: Mr. Richardson, in your remarks, you say there’s no reason to rush this through, yet you’ve heard from Mr. Hannah that there would be problems with the 30% withholding tax and the access by banks to the foreign capital markets in the United States. What’s your response to that?

Mr. John Richardson: He’s completely wrong. The obligation is satisfied upon entering into the IGA. That has been done. The agreement states very specifically that it doesn’t take effect until Canada gives notification.

Non-CON MPs picked up on the idea that a better agreement could have been negotiated and agreed that it was obvious more time should have been spent dealing with it as a standalone item. As was seen here, the Senate certainly saw a lot of problems with the IGA.

The point of this post will be to look more closely at the interaction between the Treaty, the ITA, The Privacy Act and PIPEDA. Unfortunately, while doing this, I discovered something which I believe, has not been known by most of us but which, in fact, has been in the Treaty all along and why the government claims the IGA is authorized by the Treaty. This begs the question, WHY then, was it necessary to have the IGA; and/or why was it not added as a protocol as other changes have been made since 1980? I am still sure Prof. Christians is right; the IGA is a tax-treaty override and it is not a valid document. But I want to understand how these 4 documents and timings connect to produce the mess we are in today.

I recently had a second huge OMG moment. For a reason I cannot currently remember (sigh, definitely a seniors’ moment) I had started reading the ITA and the Tax Treaty. It seemed a couple of timings were odd and I decided to re-read the Tax Treaty thoroughly. I wondered, why on earth does the government claim the IGA is authorized by the Treaty? I couldn’t see anything differently than I ever had. So in searching, I came across this: 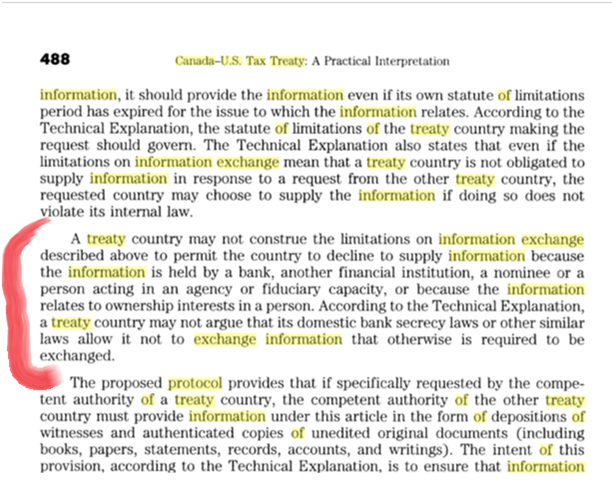 This phrase, “a treaty country may not argue that its domestic bank secrecy laws or other similar laws allow it not to exchange information…” caused my 2nd huge OMG moment. How could it be that this was signed while PIPEDA & the Privacy Act were in force? OMG this is the worst possible thing I could come across. Please tell me this is NOT true.

I finally noticed I was not looking (and apparently never have) at the most current version of the Treaty. I often will bookmark something and never even think about it again. However, unless one focuses on the year and/or which protocol, it is completely possible to miss what was added.

In the IGA we find:

So just where IS authorization to report bank accounts?

Looking to the Treaty, the fifth protocol was signed on September 21, 2007,and came into force December 15, 2008. Interesting that the Swiss Bank debacle was was heating up and OVDP hadn’t even started yet – but was a mere 3 months away. (March 26, 2009). In fact, if you look at the document just linked to regarding the debacle, you will see the lawyer references the “regular” voluntary disclosure program that had been in place for many years. Not a whiff of what was about to come. FATCA hadn’t even been introduced yet. I cannot imagine for even one minute though, that it is coincidence these Treaty changes are unconnected to all of what followed. And yet, back in 2008, I sure don’t remember hearing anything about bank account information being fair game, not in the press, not from the government, not from anywhere. Do you? Can you believe we are just now witnessing the State Department attempting to let people know of their tax obligations? The whole situation is still, simply unbelievable.

In Article 23
Exchange of Information we find:

N.B. Article XXVII (Exchange of Information) of the Convention shall be deleted and replaced by the following…………..

3. In no case shall the provisions of paragraph 1 and 2 be construed so as to impose on a Contracting State the obligation: (a) To carry out administrative measures at variance with the laws and administrative practice of that State or of the other Contracting State; (b) To supply information which is not obtainable under the laws or in the normal course of the administration of that State or of the other Contracting State; or (c) To supply information which would disclose any trade, business, industrial, commercial or professional secret or trade process, or information the disclosure of which would be contrary to public policy (ordre public).

Ok, great, I have always read this to mean that this would prevent any Canadian organization from reporting on personal financial information due to PIPEDA and/or The Privacy Act. I also thought it was the last Paragraph in this Article because I was looking at an earlier version. But look at what follows Paragraph 3:

5. In no case shall the provisions of paragraph 3 be construed to permit a Contracting State to decline to supply information because the information is held by a bank, other financial institution, nominee or
person acting in an agency or a fiduciary capacity or because it relates to ownership interests in a person.

6. If specifically requested by the competent authority of a Contracting State, the competent authority of the other Contracting State shall provide information under this Article in the form of depositions of witnesses and authenticated copies of unedited original documents (including books, papers, statements, records, accounts, and writings).
7. The requested State shall allow representatives of the requesting State to enter the requested State to interview individuals and examine books and records with the consent of the persons subject to examination.

Sound familiar? Here we have the U.S. saying (in spite of our laws?) in no case could Par 3 be used to protect banks and financial institutions (IOW, honour our laws?). And our goverment signed this? There was no 30% withholding threat in this document. Why on earth would they agree to this? (Remember, this is the Treaty in 2008 not the IGA).

I wondered whether CRA was actually able to access to that information. So I looked to the
Privacy Act where there were Recommendations April 29, 2008 (i.e., applicable because falls after the protocol was signed and before it came into force).

Strengthen the provisions governing the disclosure of personal information by the Canadian government to foreign states. Relevant Section(s) of the Privacy Act:

This paragraph was directed toward issues of “regulating the movement of goods and people and to combating transnational crimes and international terrorism.”

So apparently the CRA could not, (due to domestic law-the Privacy Act) until changes were made, share banking information even though it was authorized to do so in the Treaty as of 2008. And in addition to revving up the Treaty, changes were being made to PIPEDA long before FATCA came.

This is the first time I have ever felt the Canadian government failed us long before they signed that IGA. They knew this all along; did not alert us beforehand. Yes, it is a US requirement but they knew. And did absolutely nothing to protect Canadian citizens who were about to have their lives completely ruined.

END OF PART I

Like Loading...
« An Extraordinary Debate in the Canadian Senate Part II – The Consultation of the Privacy Commissioner-An Exercise in Futility?
Assets that will likely result in net taxes paid to US by US persons who have only Canadian source income »

57 thoughts on “What is REALLY in the U.S.-Canada Tax Treaty”