Identified by JC: http://isaacbrocksociety.ca/media-and-blog-articles-open-for-comments-part-3-of-3/comment-page-41/#comment-7345612. Brock commenters are there; comments are open (closed on previous of Elizabeth Thompson’s posts on this). 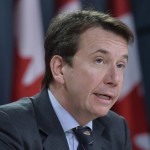 Speaking on the way into a cabinet meeting Tuesday, Treasury Board President Scott Brison and Transport Minister Marc Garneau rallied behind the position adopted last week by Revenue Minister Diane Lebouthillier, supporting the deal struck under the Harper government that saw 155,000 Canadian banking records shared with the IRS last September.

Brison, who sharply criticized the deal and tried to have it amended when he was Liberal Finance Critic, said the Liberal government has to work with the agreement.

“The previous government negotiated with the Americans on this and we have certainly inherited the situation we have,” Brison told iPolitics.

“At the time, the previous government could have negotiated more effectively at that time. The question is where are we now and it is a difficult one necessarily to deal with retroactively.”

In 2014, Garneau accused the IRS of trying to get the Canada Revenue Agency to “do its dirty work” through the deal – a deal he now supports.

“I take the position that our government is taking now and has been expressed by the minister of revenue,” he said Tuesday.

The controversy centres on an agreement worked out between Canada and the U.S. in the wake of the U.S.’s decision to adopt the Foreign Account Tax Compliance Act (FATCA), which pressured financial institutions around the world to reveal information about bank accounts in a bid to crack down on tax evasion by U.S. taxpayers with foreign accounts.

A second transfer of records to the IRS is scheduled for September 30, 2016.

“Minister Lebouthillier wants to reassure Canadians that all exchanges of information are subject to strict confidentiality rules,” reads the e-mail sent by Lebouthillier’s office.

“The CRA ensures that tax cooperation with its foreign partners is done in a manner fully consistent with privacy rights in Canada. It is important to note that Canada and the United States have a long history of exchanging tax information in a fair and responsible manner, going back to 1942.”

Thanks for continuing to shine the light for ALL Canadians to realize, Elizabeth Thompson!  We need Canadian MSM to do the same.

Like Loading...
« Obama Dares to Criticize Cuba for Human Rights Abuses – Seriously?
Revenue Minister Diane Lebouthillier (who we are suing in Federal Court) will be summoned to appear before a parliamentary committee to explain FATCA turnover of your private bank data to IRS »