If @SenTedCruz had NOT renounced CDN citizenship he could have escaped US S. 877A Exit Tax https://t.co/vHaMojxgzM pic.twitter.com/QuAVA8qfx1

– operate to confiscate assets that are located in other nations; and

– operate to confiscate assets that were acquired by U.S. citizens after they moved from the United States.

There is not and has never been an “Exit Tax” anywhere else that operates in this way. The application of the S. 877A Exit Tax to assets located in other nations, is both an example of “American Exceptionalism” at its finest and a strong deterrent to exercising the right of expatriation granted in the “Expatriation Act of 1868“.

The statute granting the “dual citizen from birth” defense to “Covered Expatriate” status reads as follows:

For purposes of this section—

The term “covered expatriate” means an expatriate who meets the requirements of subparagraph (A), (B), or (C) of section 877(a)(2).
(JOHN RICHARDSON NOTE: THIS MEANS THAT THE PERSON HAS MET ANY OF THE INCOME TEST, ASSET TEST OR COMPLIANCE TEST.)

An individual shall not be treated as meeting the requirements of subparagraph (A) or (B) of section 877(a)(2) (JOHN RICHARDSON NOTE: ONE MUST STILL MEET THE 5 YEAR TAX COMPLIANCE TEST TO AVOID BEING A COVERED
EXPATRIATE) if—
(i) the individual—
(I) became at birth a citizen of the United States and a citizen of another country and, as of the expatriation date, continues to be a citizen of, and is taxed as a resident of, such other country, and
(II) has been a resident of the United States (as defined in section
7701(b)(1)(A)(ii)) for not more than 10 taxable years during the 15-taxable year period ending with the taxable year during which the expatriation date occurs, or

Okay, it’s not quite as simple as it looks. Here are the requirements:

(2) As of the expatriation date (the date you relinquished U.S.
citizenship you continued to be a citizen of THAT specific country that you acquired dual citizenship from birth.

(3) You are taxed “as a resident” of the country referred to in paragraph (2) above.

Note that this says “taxed as a resident”. Does that you mean that you must reside in that country? What if the country does NOT impose taxes on its residents?

(4) Has not been a U.S. resident (as defined in the Internal Revenue
Code) for not more than 10 of the last 15 years.

This means that the person has NOT met the requirements of the “substantial presence test” which is described as follows: 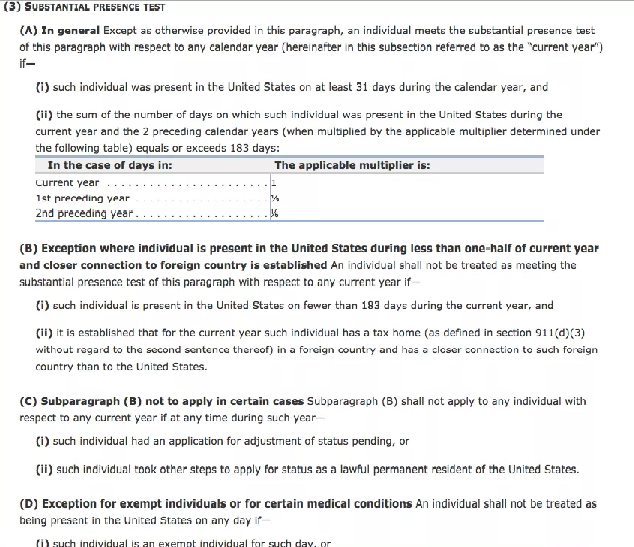 A. Are finding it very difficult to exist as a U.S. tax compliant U.S. citizen abroad. Those Americans abroad who are compliant with U.S. tax laws have agreed to live life under extreme disability. See: “How To Live Outside The United States In An FBAR and FATCA World“. Remember that “When an American is in Rome, that American must live as a Homelander”.

B. Are feeling that they are forced to renounce their U.S.
citizenship. (See the series of posts by Rachel Heller where she discusses her “renunciation”
experience. Of particular interest is her post 5 – “The Irony Of Renouncing Under Duress” – where she addresses the issue of whether her renunciation really was voluntary.)

Those Americans abroad who WERE born dual citizens, do have to deal with the compliance problems but do NOT have to fear becoming a covered expatriate (assuming that they meet the “U.S. tax compliance test).

Therefore, it is easier for those who are “dual citizens from birth” to remain U.S. citizens (for at least a longer period of time). This post has been partly motivated by the interesting discussion by a young woman in the UK who was born a dual U.S./U.K. citizen who is dealing with her discovery that she must file U.S. taxes.

S. 877A of the Internal Revenue Code is most punitive with respect to American citizens who where NOT also born citizens of another nation. As I have repeatedly said, when it comes to this kind of injustice:

Those who were born dual citizens may have “won the birth lottery”! But, Ted Cruz doesn’t seem to have realized this.

Like Loading...
« Did #Obama’s #FATCA shake 8 EUR out of every #German pocket?
New instructions to book Canada appointments to relinquish or renounce US citizenship »

29 thoughts on “Why the S. 877A(g)(1)(B) “dual citizen exemption” encourages dual citizens from birth to remain US citizens and others (except @SenTedCruz) to renounce”