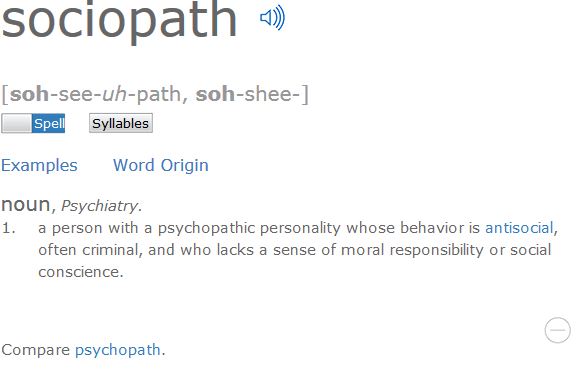 Someone asked me on yesterday’s post what I saw as the cure for our sociopathic society. It would require curing the the sociopaths and that reminds me of a joke:  How many psychiatrists does it take to change a light bulb? Only one, but the light bulb has to want to change.

It appears that sociopaths resist treatment. One website says,

TO THE BEST of our knowledge, there is no cure for psychopathy. No pill can instill empathy, no vaccine can prevent murder in cold blood, and no amount of talk therapy can change an uncaring mind. For all intents and purposes, psychopaths are lost to the normal social world.

The typical Homelander views America as the most exceptional country in the world, and so pathological nationalism is part of the disease. Why would the sociopath need to change when one is already part of the most superior nation in all human history? I personally shed my US citizenship as easily as a snake sheds an old skin. When I have explained why I shed my citizenship, to protect my family from its biggest threat, I often hear the response, “I would never renounce my citizenship!” To me that shows a pathological nationalism. It is irrational to say that you will cling to US nationality to the point of allowing your family to be tortured or sold into slavery, for example. For me, exposing my Canadian family to the capricious nature of sociopaths in Washington DC was adequate reason to shed US nationality. But then telling my story I encounter some reasonable people and a lot more psychopaths.

Sopranos: Parables on a Sociopathic Society

Everything I need to know about a sociopathic society, I learned from watching the Sopranos. I learned that a sociopath will demonstrate pretend empathy, but that ultimately your attempts to provide therapy will feed their criminal behaviour. The following video is from the final episode of the Sopranos, during which Tony Soprano’s therapist is having dinner with some colleagues. One of them points out that therapy only feeds the criminality of the sociopath:

Later, in bed Dr. Melfi reads in an article, “The Criminal Personality”:  “The criminal’s sentimentality reveals itself in compassion for babies and pets.” “The criminal uses insight to justify heinous acts.” “Therapy has potential for noncriminals; for criminals it becomes one more criminal operation.” As a result of these insights, Dr. Melfi decides to break off her therapy of Tony Soprano and the Sopranos reaches its conclusion.

How many of us have received sympathetic reactions from our own Canadian MPs who were parroting responses from the Prime Minister’s Office. They treated us like babies and pets. They had compassion for our situation and yet voted to subject our banking information to extraordinary rendition to the revenue department of a foreign government. The thing is that they knew it was wrong. First, they took a strong stand against Eritrea’s extraterritorial taxation. Wow. It demonstrates real testosterone to stand up to a poor country in the middle of Africa thousands of miles away.  Secondly, if you study their statements, such as the late Jim Flaherty’s statements about FATCA, you realize that the Tories knew it would be wrong to provide the IRS with the banking information that FATCA requires. And in my view this was perfect reason to conclude that the Tory government was indeed sociopathic: they destroyed the privacy rights of Canadian citizens, showing absolutely no empathy for those who would be harmed by it. Every last Tory who voted for the FATCA IGA demonstrated sociopathic behaviour in my opinion. For such a government, the only cure is to oust them from office, which happened in the election. But I fear that elections are really only about exchanging the sociopaths from one party with the sociopaths from another.

Thus, complaining to a sociopath, throwing oneself at their mercy hoping for compassion, rationality or justice is a very bad idea. You cannot reform a sociopath with wise and reasonable arguments. Consider the following parable from the Sopranos (language and violence warning). Here is the explanation of the parable for our purposes:  The waiter is us, complaining about the injustice of FATCA/CBT. The sociopaths Pauli and Christopher are the US and the Canadian governments respectively. The brick is the FATCA IGA; the gun is the IRS; Pauli is gloating over the restaurant bill that Christopher, the younger colleague, had to pay:

Perhaps no one among us has experienced this parable more poignantly than those who entered the IRS’s OVDP (esp. 2011-2012) programs of “amnesty”, which is essentially like exposing yourself directly to Pauli’s gun. If you plead mercy from sociopaths, they destroy you. This means that the best coping mechanism is to steer clear.

6 thoughts on “Our Sociopathic Society III: A cure or a coping mechanism?”