UPDATE: The initial story by Ralph Z. Hallow, chief political writer at The Washington Times, has been revised and greatly expanded at the same previous link:

This is stop-the-presses news: Rand Paul has joined forces with Jim Bopp, Solomon Yue and Republicans Overseas and will be one of seven plaintiffs in the upcoming lawsuit against the IRS and the US Treasury Department. The suit will be filed by a new composite organization called Republicans Overseas Action. 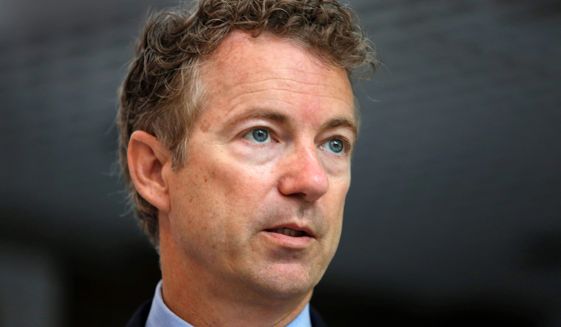 Rand Paul is poised to become the first major presidential candidate in memory to sue the government he seeks to lead as president.

The Kentucky senator will take legal action against the U.S. Treasury and the Internal Revenue Service for what he says is the denial of his constitutional right to vote on more than 100 tax-information treaties that the Obama administration unilaterally negotiated with foreign governments, The Washington Times has learned.

In what the suit says is a violation of Article II, Section 2 of the Constitution, President Obama has not consulted the U.S. Senate about the treaties nor given the Senate an opportunity to approve or disapprove of the treaties. The administration calls them “intergovernmental agreements.” They require foreign banks to gather and share private financial information about millions of Americans living and working outside the U.S. — information they would not have to disclose to the U.S. government if they lived and worked in the U.S.

The treaties or agreements are the enforcement mechanisms of the Obama administration’s Foreign Account Tax Compliance Act (FATCA), enacted by a Democratic-controlled Congress in 2010.

The act is despised by many of the estimated 8.7 million Americans living overseas, a record number of whom have — with great anger and reluctance, according to those who have spoken to the foreign and U.S. press — renounced their U.S. citizenship rather than attempt to comply with FATCA.

Mr. Paul, a Republican who announced his presidential bid in early April, will join six other plaintiffs in the suit that a new organization called “Republicans Overseas Action” expects to file in a southern Ohio federal district court the week of June 29. The court’s Republican makeup is considered at least open to the constitutional arguments that the plaintiffs lay out.

The other plaintiffs in the suit Mr. Paul has joined say they have been denied banking and financial services in the foreign countries where they live and work. The foreign banks don’t want to be burdened with the expense and paperwork to comply with FATCA and therefore simply refuse to accept Americans as clients.

The Republican National Committee and the recently formed Republican Overseas Action aim to get as many of those Americans living or working outside their country to register in one or another of the swing states that decide the presidency in close elections. Republicans Overseas Action is paying for the lawsuit Mr. Paul has joined as plaintiff.

The driving force behind the suit is a longtime conservative activist on the Republican National Committee, Solomon Yue of Oregon.

“The best way to defend 8.7 million overseas Americans’ right to privacy and constitutional protections is to cripple the IRS, FATCA and enforcement tools through legal action on constitutional grounds all the way to the U.S. Supreme Court,” said Mr. Yue, founder and vice chairman of Republicans Overseas Action Inc

For reference, here was our initial coverage today:

A very significant announcement from Rand Paul today, as reported by The Washington Times:

Kentucky Sen. Rand Paul will sue the U.S. Treasury and the Internal Revenue Service for denying his constitutional right to vote on treaties that the Obama administration unilaterally negotiated with dozens of foreign governments, The Washington Times has learned.
The treaties, which the administration calls “intergovernmental agreements,” require foreign banks to gather and share private financial information about millions of Americans living and working outside the U.S. – information they would not have to disclose to the U.S. government if they lived and worked in the U.S.

Like Loading...
« Help Me Keep My April 5 Promise Revisited-We Will Never Forget the IGA Betrayal by the CONs
It’s 24 Hours Until FBARs are Due – Do You Know Where Your Children Are? »