This is one of the most bizarre stories I have seen in some time. In an odd sort of way, it is quite similar to the kind of treatment expat dual US/CDN citizens have experienced via the “FATCA Hunt” and the IGA. And similar to the accidentals/non-meaningfuls, this time, Canada is failing to protect one of it’s native-born sons. YogaGirl kindly shared this story . (all emphases below are mine).

“Without a Canadian passport I am not allowed to enter Canada because dual citizens may not enter the country with the passport of their alternative citizenship.”

No crime, no warrant. No trial. No justification. What sort of government does this resemble?

“I don’t have a Canadian passport.

Because Stephen Harper took it away from me.

There is no Canadian warrant for me in Canada.

Stephen Harper took away my Canadian passport because Japan asked him to take it away.

Because we opposed illegal Japanese whaling in the Southern Ocean, a whaling operation that has been condemned as illegal by the International Court of Justice.

Stephen Harper decided that supporting illegal Japanese whaling was more important than defending the rights of one of his own citizens”.

Any Canadian who doubts the fact that Canada is becoming totalitarian under Harper is under serious delusions. PMSH isn’t even using C-24 or C-51 in the way those bills claim to operate yet a citizen is being stripped of his rights and protections. Conservatives will label Capt Watson as a “radical” or (ecological) “terrorist” which will prevent mainstream Canadians from recognizing the treacherous actions taken by the Canadian government. By presuming Capt Watson is “dangerous,” Canadians will not see the reality of what is happening, in the same way that Homelanders cannot see that we are not tax cheats or traitors. This will allow Harper to keep going down this road. Very dangerous territory. 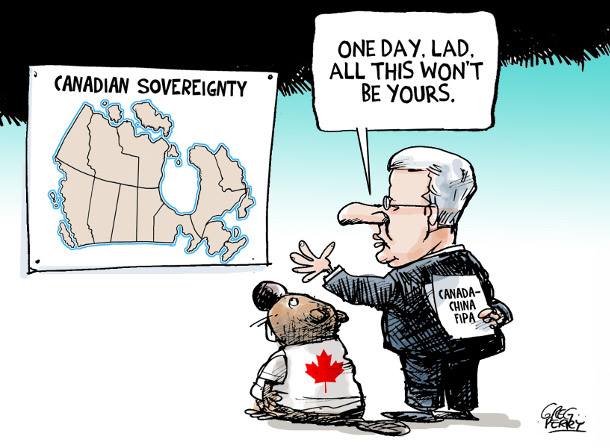 Perhaps someone should do a comparison of Bill C-51 and the Patriot Act? People should be looking carefully at how the two might be used cooperatively against citizens of both countries. It may be worth remembering how the border is being compromised (police of both countries operating on each others’ soil, with the Americans wanting to apply US law when in Canada) as well as the build-up of Canadian super-prisons even though crime is way down. Said not to incite fear but to face facts.How can one not be reminded of Naomi Wolf’s Blueprint for Shutting Down an Open Society?

“My position is quite simple.
In supporting and voting for Bill C-51 and making it law, both Stephen Harper and Justin Trudeau have betrayed all past generations of Canadians..

C-51 has negated the Canadian Charter of Rights and Freedoms.

We now have freedom of speech until we open our mouth. Harper now has a right to revoke citizenship without explanation something that he already effectively did with me.”

Again, these words could have been written by any American who finds his/herself trying to come to terms with the fact that the U.S. is no longer the place they grew up in. I actually find it incredibly more sad, to hear a CANADIAN say exactly the same. I guess I am used to this behaviour by the U.S. but figured Canada had a long way to go before engaging, to the same extent, in the betrayal of it’s people as well as it’s founding principles.

“You see Harper can keep me as a Canadian out of Canada but he can’t take Canada away from me. I swam with beavers as a child. I’ve trudged in snow shows at 49 below in the Peace River Valley to protect wolves. I led eight campaigns to the ice floes to defend harp seals…..

In other words, I’m just as much a Canadian as that sanctimonious petro-ass kissing corrupt, scofflaw, smug, on-the-take, holier than thou, climate change denying embarrassment of a Prime Minister who needs to be kicked out of Ottawa on his dictatorial pseudo-Tory ass come October.

It’s not only time for a change it’s essential that there be a change and it’s time for us to return Canada to what we once were – a freedom loving, peace loving, beautifully wild nation – and what we need to be, a nation rich with First Nation heritage, true conservatives as in nature conservationists, instead of pseudo-conservative eco-terrorist right wing radicals, hell bent on selling the nation out to corporate marauders.”

Until Canadians start to fight back, Harper will continue destroying this incredible country. We have our hands rather full fighting the IGA and CBT but there is one simple way to support our fellow “freedom-fighter.”

Please help by signing this petition and sharing on FB, Twitter, etc. Time to start building a network in Canada. And don’t forget to vote ABC. More on this story.

Like Loading...
« Liechtenstein Court issues temporary order against implementation of FATCA “IGA”
Let’s Get Republican Presidential Candidates On the Record for FATCA Repeal! »