Internal White House emails obtained by BuzzFeed appear to show that the White House knew shortly after the crash Thursday that there were not 23 Americans aboard the plane, as had been widely reported on Thursday.

President Barack Obama made very brief remarks about the crash on Thursday afternoon before a pre-planned speech in Delaware.

‘Obviously the world is watching reports of a downed passenger jet near the Russia-Ukraine border. And it looks like it may be a terrible tragedy. Right now we’re working to determine whether there were American citizens on board. That is our first priority,’ he said.

It is tragic that this young man was on the Malaysian MH17 plane and now gone.

If this were so many of our families, we would hate to have our children identified as a US citizen at all, let alone a possible pawn, a pretext for aggressive posturing towards Russia, (and a possible reason to go to war).

Quinn Lucas Schansman’s citizenship status would be like the many others: “Accidental Americans” born in the US but who left with their other citizenship parents as infants or young children to live in other countries — raised in and with the cultural identity of the country still lived in.  From the above news article:

[Quinn’s family is from Hilversum (the Netherlands) in the north of the country. It was not immediately clear where his family was from in the United States.]

Quinn Schansman was born in Fort Lee, N.J. to Dutch parents. He lived in the U.S. for five years before moving to Holland with his family. Quinn was a dual citizen of the United States and the Netherlands./

Was Quinn in the count of those who died from the Netherlands? 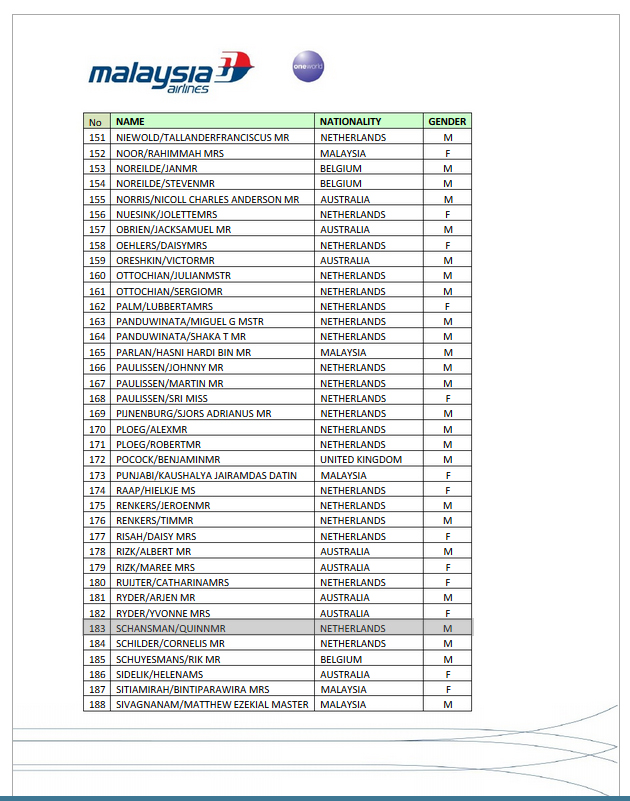 There is a report that the US State Department has been instructed to look over the passenger manifest with a fine-tooth comb to see if there are any further dual citizens.

‘The Animal’ (who sent this to me) and I can see the ramifications for our own children.  We know as we have been told:

“You are American until we tell you you aren’t”

My children and The Animal and his US-born wife’s children were born in Canada (but to US citizen(s) – how hard would it be to pin that US citizenship label on them?

This (I think exploitative) news story gives even more reason to have only citizenship we want to be identified with, excluding automatic “dual” U.S. citizenship status passed on to our children. With the qualifications to be able to claim such, should they not have that choice to make when they are adults and with ‘requisite mental capacity’ to be able to do so? Until then, hands off labeling our children.

[I have to ask myself, “If it were my child born and raised in Canada that was the victim of such a tragedy, would I want him or her identified as a US citizen or even a dual “US/Canada” citizen?” My answer to myself is “NO”. Others, though, might wish that US/Canadian duality highlighted in some news story. Interesting question to ask ourselves.]

Or, at least that’s the way I see it.

Like Loading...
« Canadian Banks want to merge: I say hell NO!!!
How USA OUTFOXED the UK for USD $ Dominance at Bretton Woods »