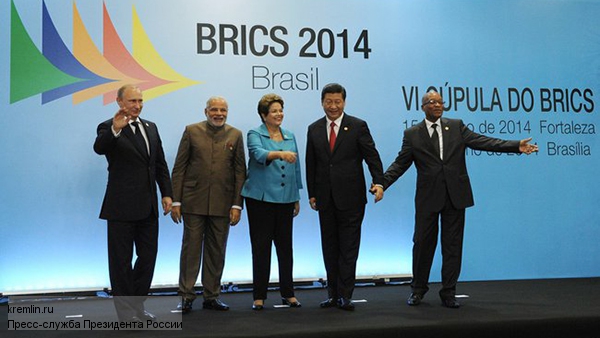 A timely Russian report by Vladimir Vinnikov on the BRICS summit in Brazil, presenting further evidence of the undeniable relationship between FATCA and the accelerating worldwide abandonment of the US dollar.  Or, as the Google-translated article so quaintly puts it, “Cinderella carriage turn into a pumpkin.”

BRICS instead of G7: Russia makes the right choice

Today, in the Brazilian city of Fortaleza in the north-east of the country “in a narrow composition” started VI BRICS summit, which then moves to the capital Brasilia. The main event of the summit, many observers recognize participation in the work of Russian President Vladimir Putin, before he has visited Cuba, Nicaragua and Argentina, and in Brazil spent the eve of the summit, a series of bilateral negotiations – including President Xi Jinping and Chancellor Angela Merkel.

These meetings confirmed that Russia’s position in the international arena, including – and Ukrainian problem – find understanding and support all over the world except the United States and a narrow circle of their closest allies, united in the G7. Therefore we can say that the attempt by the West to isolate Russia and turn it into a pariah state, accusing him of aggression against Ukraine, failed completely.

Moreover, apparently, “expulsion” of the Russian “Big Eight” and return to the U.S. format G7 go down in history of world diplomacy as a classic example of what irreversible error literally doomed recent superpower, are in the decline of its power.

Moreover, irreversibility, and not a coincidence these errors once again proved by the efforts that the United States is applied to force the banks to participate in the world system of financial control FATCA, the introduction of which is estimated to most experts, lead to a massive failure of holders of dollar-denominated assets in U.S. currency.

Even today, the demand for renminbi brought against the global financial market, reached 20-25 billion yuan every day, which is about 15 times higher than the level that was observed in mid-2013. And the creation of an alternative financial processing center in the face of the New Development Bank (New Development Bank, NDB) BRICS with registered capital of $ 50 billion, which will be the Chinese share of 40%, will undoubtedly lead to increased displacement of the dollar in international finance.

Most likely, this process would not be a one-time or even explosive character, because the conversion of dollar savings available to the Member States of the BRICS, in real assets will require considerable time – likely several years. In itself, however, this trend “out of the dollar” is undeniable, and the world, crowded dollars (real goods and services provided by not more than 5% of the outstanding dollar liabilities in the world), it may at any time take the character “chain reaction”.

Coinciding with the beginning of the Brazilian BRICS summit was “bad news” from Portugal, where the largest Banco Espirito Santo (Holy Spirit Bank) made a late payment of some bills, which led to a momentary drop in not only its actions, but also government bonds of Portugal, show how financial markets today are “overheated” and sensitive to the slightest signs of possible bankruptcy.

Once the dollar will lose its status as the only “safe haven” for global capital seekers and face competition from independent financial centers him (what, according to the BRICS, working in close cooperation with the “empire of the Rothschilds,” should become NDB Bank and its unit of account ), all the benefits of owning a printing press for the production of “bucks”, including the U.S. federal debt that can not be repaid in the amount of $ 17.6 trillion, can very quickly become a source of huge problems, “Cinderella carriage turn into a pumpkin.”

Many U.S. allies have imposed on them today burdened relations with Washington – it shows in scandal interviews with senior Polish politicians and financiers, and German Chancellor Merkel, who apparently was deeply hurt by the uninvited intrusion of “Uncle Sam” into her personal life .

We can only hope that, as Vladimir Putin assured Xi Jinping, “the plans that we have identified with you, I am absolutely sure everything will be implemented …”

Like Loading...
« FFI’s begin to complain about FATCA compliance burden
The Alliance for the Defence of Canadian Sovereignty has made it onto Wikipedia! »

60 thoughts on “A bank made of BRICS vs. a buck made of straw”