All U.S. citizens abroad are living the reality that the tax and reporting requirements of U.S. citizenship abroad have meant that U.S. citizenship has been priced out of the market. Many U.S. citizens abroad simply do NOT have the money to pay the compliance costs. Furthermore, it has become clear that what the U.S. refers to as “citizenship-based taxation” is actually a deliberate form of “residence based life control“. Let’s at least understand what we are talking about.

The role of the IRS – “It’s about the control stupid”

As you know the IRS is working hard to extend its regulatory reach over all aspects of tax compliance. Attorneys, CPAs, EA, and anybody else (whoever that might be) are already subject to IRS Circular 230. In simple terms: this means that their livelihood is subject to compliance with IRS rules. It has reached the point where many believe (with justification) that the the tax professionals are a greater threat to U.S. citizens abroad than the IRS could ever be.

Recently the IRS has attempted to:

1. Impose licensing requirements on all tax preparers; and

As I once tweeted:

There are many reasons why as a matter of principle and policy the IRS should not be permitted to impose a licensing requirement on tax preparers. At least for the moment, the courts agree. Pending the usual appeals process, a court has struck the requirement down.

HR Block is a huge beneficiary of IRS regulation of tax preparers!

Put it another way:

Although the IRS and the compliance industry are business partners, HR Block is a preferred partner!

As I noted in a previous post on the IRS regulation of tax preparers:

The effect of all this on “small preparers” was described by Bloomberg:

“UBS AG analysts Andrew Fones and Margaret O’Connor issued a report that said the IRS initiative will help H&R Block by preventing small preparers from entering the market and driving others out of it.

“We think the regulations could be a boost for Block starting” in 2011, the analysts said.”

It is in effect a “tax” on “tax”. Yes, that is where the U.S. has come to . The additional costs of having your tax return completed, are a tax on tax itself. But I digress.

So, it is in the interests of the big boys “HR Block”, etc. to have barriers to entering the tax preparation business. Now, the story continues to get even more interesting (and this may all be only circumstantial and irrelevant). But, it is very interesting. The Washington Examiner opines that:

“But again, H&R Block isn’t just a passive beneficiary of this regulation — it was an active supporter. In July, once the IRS announced it was considering these rules, H&R Block hired the Podesta Group to lobby on the matter. The Podesta Group was co-founded by John Podesta, who later became an Obama confidant and his transition director. Podesta Group is currently run by Tony Podesta, the leading lobbyist-bundler in the country, who has raised, together with his lobbyist wife, well over half a million for Democrats this election.

But wait, it gets better. The IRS official in charge of writing these rules: Mark Ernst, former CEO of H&R Block. As I wrote at the time:

With Ernst in mind, recall Barack Obama’s campaign pledge: “No political appointees in an Obama administration will be permitted to work on regulations or contracts directly and substantially related to their prior employer for two years.”

This campaign pledge manifested itself in an executive order requiring “every appointee in every executive agency” to pledge, “I will not for a period of 2 years from the date of my appointment participate in any particular matter involving specific parties that is directly and substantially related to my former employer or former clients, including regulations and contracts.”

Ernst obviously didn’t follow these rules, but the IRS tells me that Ernst is not covered by these rules. “Mark Ernst is a civil servant at the IRS; he is not a political appointee,” according to an e-mail IRS statement by an agency spokesman.”

Now, just in case you are not getting this:

Does this pass the smell test? Is there anything wrong with the former CEO of HR Block becoming a deputy commissioner at the IRS? I don’t know. You tell me.

Mark Ernst, the former chairman and CEO of H&R Block who went on to become deputy commissioner for operations support at the Internal Revenue Service, will be leaving the IRS later this year, according to an announcement Thursday by IRS Commissioner Doug Shulman.

Ernst joined the IRS last year after having been chairman and CEO of H&R Block from 1998 to 2007. He left Block to head the venture capital firm Bellevue Capital for two years before joining the IRS.

“Mark has been a most valued, respected and dedicated member of my leadership team, and he brought a unique perspective and focus to some of our most important initiatives, such as technology modernization, cybersecurity, financial management and workforce issues,” said Shulman. “I want to thank him for his strong contributions to the nation’s tax system, and he will be deeply missed by all of those who had the opportunity to work with him.”

Incidentally, Mr. Ernst’s replacement at HR Block was none other than Richard Breeden. Canadians might be interested to know that this is the Richard Breeden of Conrad Black fame.

In March of 2012, we had a lively discussion about a page on the HR Block page suggesting that U.S. citizens abroad should enter Voluntary Disclosure (whatever that is supposed to mean). The consensus was that HR Block didn’t understand either the issue or how OVDP worked. (You might read this discussion before retaining HR Block.)

It is clear that

There's good money to be made in US tax compliance – HR Block seeks its fair share from #americansabroad http://t.co/wdmsHEO7eW

HR Block has clearly retooled itself (at least the marketing) so that U.S. citizens abroad “pay their fair share” to HR Block. Here is a snapshot of their opening page. Without reading the explanations, do you see a category that applies to “U.S. persons who are both working and living abroad indefinitely”? 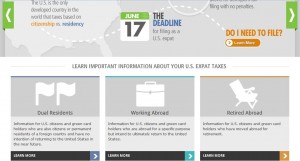 Same soup warmed over – Do those people have any idea who their client base is?

Different kinds of tax preparers for #americansabroad – Make sure you know what you are dealing with http://t.co/Jk0Ymj1RRn

Also, as a reminder. There are different categories of tax preparer. They include: lawyers, CPAs, EAs, and tax preparers. HR Block is in the last category. As Badger points out, the complexity of your situation dictates the kind of preparer you want.

Yes, time to enjoy yet again, the seemingly impossible task of getting knowledgeable yet ‘affordable’ US tax assistance from ‘abroad’ that falls somewhere between the likes of HR Block (not cheap either http://www.hrblock.ca/services/US_tax_pricing.asp ) and entering into an opaque and unlimited ‘terms of agreement’ – as even one local (and small) accounting firm insists on (while simultaneously refusing to provide even a gross estimate of the anticipated fee) – for preparing a mere puny 1040, reporting income barely large enough to meet the reporting threshold, plus the labyrinthine final forms for the pitiful registered Canadian “foreign trust” savings account closed in holy sacrifice – gone to pay professional fees to attain the practically impossible to achieve – but oh so blessed and esoteric state of US tax and reporting ‘compliance’ from ‘abroad’ and buy out involuntary servitude – and try to buy elusive peace of mind – with the usual zero US tax owed of course). As we know, we can’t afford to make even an inadvertent mistake no matter how small or non-existent the ‘US taxable’ income, or else it’s the US hangman and financial ruin for the likes of us living and working dual citizens outside the US.

Like Loading...
« IRS “systematically targeted overseas Americans”
The Unintended Consequences of #FATCA Crack Down on Tax Dodgers in the Homeland via @TheAtlantic »

7 thoughts on “Tis the season – The HR Block chronicles continue”