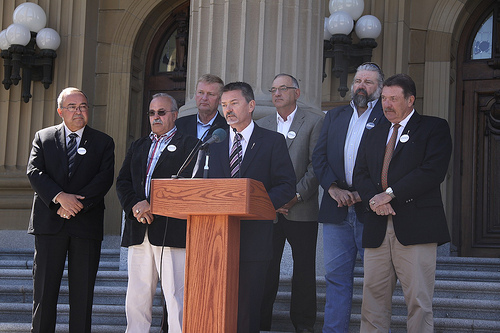 Interesting tussle between Conservative Alberta Finance Minister Doug Horner and Jim Flaherty (and indirectly by the way between Doug Horner and the Canadian Bankers Association).

The province’s finance minister, Doug Horner, said Alberta was happy to discuss greater cooperation with Ottawa, especially in the realm of systemic risk. But the energy-rich province, which is seen as a key player in creating the critical mass of support that would pave the way for a national regulator, is not about to dismantle its own financial watchdog.

“We’re talking about a collaborative system. It isn’t that we’re going to go to a common securities regulator and have one office somewhere,” Horner said in an interview on Wednesday. “That’s been pretty much off the table for provinces for some time.”

But Horner dismissed the idea of a central regulator and said provincial finance ministers who met in Montreal on Monday wanted instead to consider improvements to an existing “passport” system.

I think perhaps it is time to replace Mr. Flaherty as Federal Finance Minister with Mr. Horner of Alberta a man who likes using words like SOVERIEGN, NO, NOT, and WON’T.

1 thought on “Doug Horner to Jim Flaherty: See you in court”