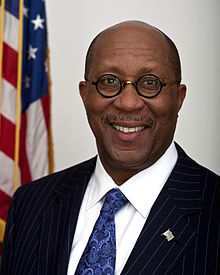 U.S. Trade Representative Ron Kirk hopes that the Jackson-Vanik amendment can be repealed

According to an Associated Press report from Moscow, U.S. Trade Representative Ron Kirk stated in a speech to the American Chamber of Commerce in Russia that “it’s necessary for us to lift Jackson-Vanik”. There doesn’t seem to be any transcript or video of Kirk’s speech, but you can see the AmCham page about the event for more details.

Jackson-Vanik, also known as the Freedom of Emigration in East West Trade provision (19 USC § 2432), disallows normal trade relations with non-market economy countries which “impose more than a nominal tax on emigration or … on any citizen as a consequence of the desire of such citizen to emigrate”. Petros wrote about this provision back in January.

Jackson-Vanik, at the moment, is basically without teeth (kind of like the FBAR law used to be): the U.S. has granted Russia a waiver every year since 1994. And of course, the U.S. considers itself a market economy (giant bailouts of thieving banks and failed car manufacturers notwithstanding) and thinks that its taxes do nothing more than make people not living in the country pay “their fair share”. Apparently Kirk is completely unembarassed by the hypocrisy of Jackson-Vanik; he’s just worried that it’s bad for business in Russia. Of course, the U.S. system of extracting global tribute from its citizens is much worse for business, as Roger Conklin has been pointing out tirelessly since the Ford administration — the same Ford administration under which Jackson-Vanik became the law of the land.

How did emigration from the USSR work? Well, the Soviet border guards would go through your suitcase at the airport, destroy all your possessions, and then revoke your citizenship. As Gary Shteyngart described the process in his semi-autobiographical debut novel back in 2002:

The well-fed men of the Interior Ministry in their tight polyester uniforms, now completely without reason for concealing their hatred for the soon-to-be ex-Soviet family before them, obliterated their luggage, tearing apart the wide-collared Finnish shirts and the few passable business suits smuggled through the Baltics, clothes which Vladimir’s parents had hoped would last them through their first interviews in New York. This was done ostensibly to find any hidden gold or diamonds that exceeded the miniscule amount allowed to leave the country. As they tore through Mother’s address book, shredding anything with an American address, including her Newark cousin’s instructions on how to get to Macy’s, a particularly large gentleman, whom Vladimir would never forget as having had a mouth frighteningly empty of teeth (even the silver kind that were standard issue to middle-aged Warsaw Pact citizens) and a strong smell of sturgeon on his breath, said to her: “You’ll be back, Yid” …

And to Vladimir’s surprise, as the pages of her address book scattered about her and as the customs agents roared in appreciation of Comrade Sturgeon-Breath, Mother did nothing but twist the strings of her little leather purse around her whitened hand, while Dr. Girshkin, avoiding the frightened gaze of his son, made slight and ambiguous gestures toward the departure gate and their escape. Then, before he knew it, they were buckled in, snow-covered, gas-streaked Russia rolling beneath the airplane’s wings, and only then did Vladimir allow himself the luxury, the necessity, of crying.

The United States, of course, harasses its emigrants in a much more “cultured” way.

But the accusation that emigrants are “rootless cosmopolitans” remains the same:

Imagine some Americans have grown so prosperous, they can denounce [sic] their citizenship and discover one day that the Port Royal Golf Course in Bermuda is their hometown, that they have new citizenship. A problem only again this month we learn is a multibillion dollar scandal of people renouncing their citizenship for the sole purpose of dodging taxes. Once again, like the fellow in the fedora, those who have that amount of patriotism, those scoundrels are fully protected in the bill we’re debating today, and they are fully dealt with in Mr. Rangel’s substitute. That’s why Republicans are so fearful of dealing with the real tax problems in this country. And who do you think picks up the bill for the guy in the fedora and the scoundrel who renounces his American citizenship? Small business.
— Lloyd Doggett (D-TX), during the debate on the Wage and Employment Growth Act of 1999, in the House session of 9 March 2000 (see video).

7 thoughts on “U.S. trade representative urges repeal of law requiring U.S. to impose sanctions on itself”