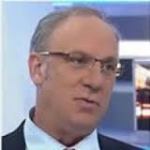 The obligation to file a tax return would depend on the amount of taxable income the child received and whether that income met the thresholds for filing. It is unlikely (but not impossible) that the child could meet the income thresholds. For information on thresholds (which also depend on filing category) see:

Do I Need to File a Tax Return?

The child is a recipient of support from Harry

The child is probably going to live life as a normal baby and will be both supported and cared for by his/her parents. It is reasonable to assume that the child will receive financial support from the Harry (the father) who is (from a U.S. perspective) an “alien” or at least a foreign person.

Should the food, housing, medical care, toys, etc. received from Harry be considered to be a “gift” from a “foreign person”? If the answer is YES and the value of the support exceeds $100,000.00 USD then the child has a reporting obligation to the IRS (whether the child files a tax return or not). This is made very clear by Section 6039F of the Bible Of American Life – The Internal Revenue Code. It reads:

If the value of the aggregate foreign gifts received by a United States person (other than an organization described in section 501(c) and exempt from tax under section 501(a)) during any taxable year exceeds $10,000, such United States person shall furnish (at such time and in such manner as the Secretary shall prescribe) such information as the Secretary may prescribe regarding each foreign gift received during such year.

For purposes of this section, the term “foreign gift” means any amount received from a person other than a United States person which the recipient treats as a gift or bequest. Such term shall not include any qualified transfer (within the meaning of section 2503(e)(2)) or any distribution properly disclosed in a return under section 6048(c).

the tax consequences of the receipt of such gift shall be determined by the Secretary, and

such United States person shall pay (upon notice and demand by the Secretary and in the same manner as tax) an amount equal to 5 percent of the amount of such foreign gift for each month for which the failure continues (not to exceed 25 percent of such amount in the aggregate).

Paragraph (1) shall not apply to any failure to report a foreign gift if the United States person shows that the failure is due to reasonable cause and not due to willful neglect.

In the case of any taxable year beginning after December 31, 1996, the $10,000 amount under subsection (a) shall be increased by an amount equal to the product of such amount and the cost-of-living adjustment for such taxable year under section 1(f)(3), except that subparagraph (A)(ii) thereof shall be applied by substituting “1995” for “2016”.

The Secretary shall prescribe such regulations as may be necessary or appropriate to carry out the purposes of this section.

Note that the “cost of living adjustment” makes it clear that the threshold for reporting is now $100,000.00 USD.

The application of this rule is explained by the IRS here.

Please note that to the extent that Meghan is the recipient of support from Harry and the Royal Family she is also required to report this support on Form 3520 (the information return where the gift is reported).
With respect to the Child – it might be better if Meghan (as a U.S. citizen) were to provide the support or if Harry never contributed more than $100,000.00 of support.
In any event, as in all “FBAR Marriages”, it would be wise for Harry and Meghan to keep VERY DETAILED records of the (1) the costs paid to support the child and (2) how much of that support comes from Harry (“the foreign person”).

Are the “foreign gifts” taxable as income to the child?

Generally no. Gifts are not generally taxable to the recipient.

S. 2801 of the Internal Revenue Code makes it clear that if the child were to receive gifts/bequests from a “covered expatriate” then the gift/bequest/support becomes taxable TO THE CHILD. This is explained in the following blog post:

Therefore, it is important that IF Meghan renounces U.S. citizenship AND wants to provide support to her child that she first (prior to renunciation) give away enough of her assets so that she is no longer a “covered expatriate” (her net worth would need to be less than 2 million USD). Perhaps she could give the assets to the child in advance of renouncing U.S. citizenship. (Note that because the gifts came from Megan while she was still a U.S. citizen the gifts would not be from a “foreign person”.) But if she gives assets to the child in advance, she must be careful about creating a trust for the child which could conceivably generate more reporting requirements

Note that IRS Form 3520 is used to provide the reporting in relation to both the “Foreign Gifts” and the “Foreign Trusts”.

Basically if the child has “foreign financial assets” that exceed $200,000 USD AND the child is otherwise required to file a 1040 then the Form 8938 must be filed. Of course, the failure to file the Form 8938 will subject the child to more penalties. The instructions to Form 8938 are here:

Let’s not forget about Mr. FBAR …

Should the child have non-U.S. bank accounts, mutual funds or other investments that exceed $10,000 in value there may be an obligation to file an FBAR. In recent years, the IRS has made it very clear that – generally a child has the obligation to file his own FBAR!!! See the video in the following link.

It is essential that nobody rely on this as legal advice because I have not discussed a number of other possible reporting requirements.

Q. Will the IRS enforce these rules against Ms. Markle’s child?

A. Of course not. Babies (even U.S. citizen babies) are not born tax evaders.

Q. So, why I am providing such a detailed answer if the IRS wouldn’t enforce these rules against Ms. Markle’s baby?

A. To show you how insane the rules are that apply to U.S. citizens living outside the United States or who marry somebody who is not a U.S. citizen.

Q. What should U.S. citizens living outside the United States do?

A. Get rid of U.S. citizenship “quick time”.

Q. Why are people getting rid of their US citizenship? A. It's because of the "10 Commandments of U.S. Citizenship" in a #FATCA and #FBAR world by John Richardson https://t.co/cbjEJ91Ijw

The IRS won’t enforce the rules against Meghan Markle and her child. But, they might enforce them against you.

Further reading (if you can stand the horror) …

IRS Form 3520, Penalties, and Whether to Make a Protective Filing – The CPA Journal

147 thoughts on “What if Meghan Markle’s child is born a U.S. citizen? Would the child have any immediate tax and information reporting requirements to the IRS?”