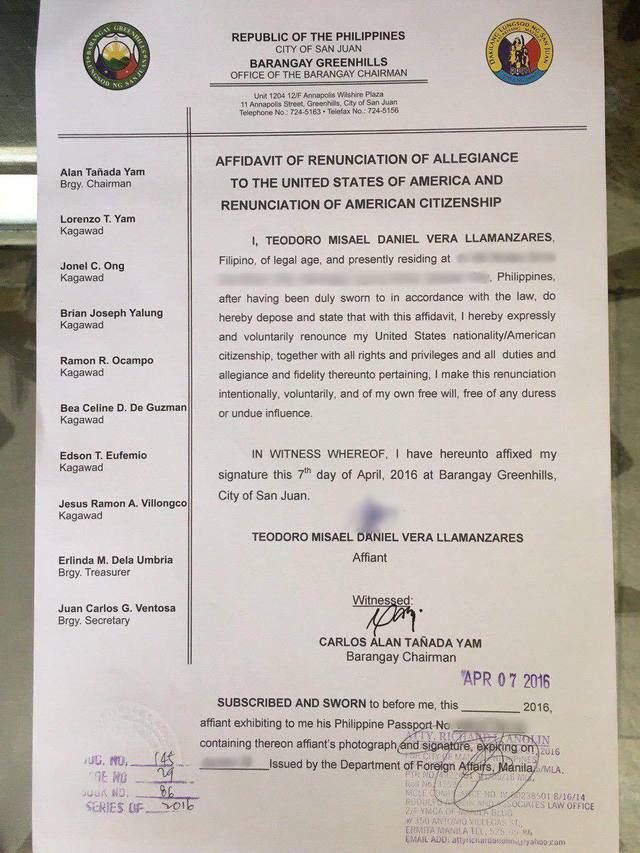 It would be interesting to know if Philippine banks would accept a certificate like the one pictured above as proof that one was not a “U.S. person”, but it looks like we’re not going to find out in this case: Llamanzares already went and paid the U.S. Embassy in Manila’s extortionate fee to obtain one of their CLNs as well.

Also, since Llamanzares is a Very Important Person and not just one of us tax-evading money-laundering drug-dealing America-hating terrorist bloggers, they gave him one of those rare, strictly-rationed appointment slots and processed his paperwork in record time — the same high level of service that Fauzia Kasuri of Pakistan enjoyed a few years ago back when the fee was less than a fifth of its present level. A few days before the election, the Philippine Inquirer revealed:

Senator Grace Poe said her husband Neil Llamanzares has completed his renunciation of his US citizenship and is expected to receive Friday a certification from the US embassy.

“I’d to clarify this issue once and for all, my husband has renounced before a public officer here in the Philippines and has done so also in the US embassy and he’s actually getting his certificate already today,” Poe said in an interview over ABS-CBN News Channel’s (ANC) Headstart program.

Unfortunately for Ms. Poe, she lost the election, but look on the bright side: at least she and her husband are both now free of any peeping foreign perverts invading the privacy of their marriage.

Oath of allegiance to a foreign state

In the U.S., the Expatriation Act of 1868 affirmed that “the right of expatriation is a natural and inherent right of all people”, and in the debate leading up to its passage, Senator Edwin D. Morgan (R-NY) pointed out that requiring a person to apply for proof from his former government that he’d renounced its citizenship was tantamount to admitting that renunciation was a privilege requiring permission for the exercise, rather than a natural and inherent right. Philippine statutes apparently also recognise this idea, though I can’t cite verse & chapter — I’m just relying on Rappler‘s description:

Under Philippine law, a person only needs to take an oath of renunciation of foreign nationality before a notary public to effectively reject it.

But under US law, one has to fill out a questionnaire at the US embassy to confirm the renunciation. After which, the consular officer would issue a Certificate of Loss of Nationality.

Poe said her husband has already started the renunciation process before the US government but it would likely take a long time, just like her experience.

However, U.S. State Department officials clearly don’t share Morgan’s attitude, as seen in this response of theirs to another Filipino who tried to exercise his rights under both the Expatriation Act of 1868 and the laws of his own country to divest himself of foreign allegiances: 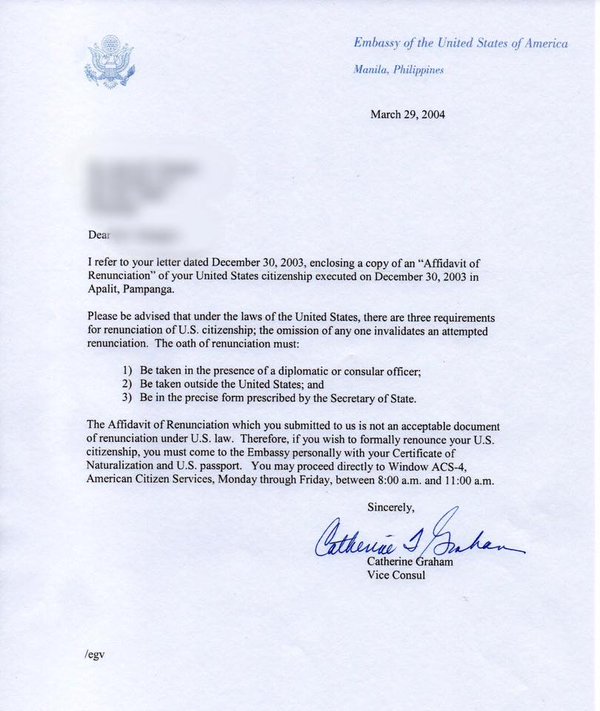 Even if the apparently-not-very-well-informed Ms. Graham had been aware that an oath of allegiance to a foreign state is an expatriating act under 8 USC § 1481(a)(2), her department has already made their best efforts to ignore Congress and make that provision of law into a dead letter by adding all sorts of nonsensical requirements which appear nowhere in the statute nor in the court case they cite in support of their position. 7 FAM 1252:

h. For an oath or affirmation to be potentially expatriating, it must be meaningful. A meaningful oath is one that is required by a foreign state. Such an oath reflects a transfer of allegiance to a foreign state and/or the abandonment of allegiance to the United States. Gillars v. United States, 182 F.2d 962 (DC 1950). An oath or affirmation will be found to be meaningful only if all four of the following criteria are met:

NOTE: For example, a person who has already acquired a foreign nationality may not expatriate herself by swearing an oath of allegiance to that same foreign state because she already owed that state her allegiance, unless the foreign state’s law specifically grants her a new right after making the affirmation not already conferred upon by virtue of her prior naturalization.

The Department determines on a case-by-case basis whether an oath of allegiance is meaningful for purposes of INA 349(a)(2).

What the DC Circuit Court actually noted in Gillars was that the paper that Gillars’ German boss made her sign after her little workplace spat was so vague and informal that it didn’t meet the bar of “to a foreign state”. The court made no mention whatsoever of the oath needing to confer new rights on or otherwise alter the legal status of the affiant:

There is no indication, however, that the paper which she said she signed was intended as a renunciation of citizenship; there is no testimony whatever that it was sworn to before anyone authorized to administer an oath or indeed before anyone at all; its exact content is uncertain; if it be treated as an affirmation or declaration rather than an oath it is informal rather than formal in character; and there is no connection whatever shown between it and any regulation or procedure having to do with citizenship or attaching oneself to the Reich or to Hitler. These circumstances preclude attributing to it the character of such an oath or affirmation or other formal declaration as the statute requires to bring about expatriation. We think the court was correct in not permitting the jury to speculate as to the effect of this testimony on citizenship and in ruling that as a matter of law the appellant at the times involved was a citizen of the United States and owed allegiance to her native land.

However, the paper that Llamanzares signed has none of the defects mentioned in Gillars: it contains language expressly renouncing foreign citizenship, he clearly signed it with the intent of divesting himself of foreign citizenship, and he signed it in the presence of officials of his govenrment authorised by their domestic statutes to administer such oaths.

And furthermore, even if you adhere to the State Department’s extralegal, ultra vires viewpoint on oaths of allegiance, there’s good news. FATCA Inter-Governmental Agreements create two classes of citizenship in every signatory country: those local citizens who are deemed U.S. persons and thus must forfeit their privacy rights so that the banks don’t get an extra 30% of their U.S.-source income stolen by the IRS, and those local citizens who are not deemed U.S. persons and thus get to keep their privacy rights. To swear an oath which moves you from one category to the other is obviously an “alter[ation] of the affiant’s legal status”.

A person holding such a certificate should have the right to be treated solely as a citizen of his or her country by all public and private institutions, and the duty to conduct him or herself as such (for example, not using a foreign passport to travel to other countries, and not voting in foreign elections). This may require additional legislation, as it’s not an automatic consequence of the Master Nationality Rule (which only binds governments, not banks and their maximalist-extremist lawyers acting under fear of IRS penalties or DOJ investigations).

So in particular, your local government must pass legislation to ensure that banks accept these certificates as proof of non-U.S. personhood for FATCA purposes. Under the IGA, bank customers with U.S. indicia are required to provide a “reasonable explanation” of not having a U.S.-issued CLN; well, the obvious one is that the U.S. State & Treasury Departments have made such CLNs unreasonably time-consuming, expensive, and dangerous for ordinary people to obtain.

But as long as domestic legislation states that the holding of a domestic-law Certificate of Loss of Nationality of [BLANK] qualifies under the IGA as a “reasonable explanation” or even as a “Certificate of Loss of Nationality of the United States” (a term which is not expressly defined in any IGA I’ve seen), then anyone who swears the oath to obtain such a certificate has had their legal status altered by swearing the oath. Problem solved!

As certain Members of Parliament in Canada like to say: Congress has spoken! In fact they’ve spoken quite clearly, for nearly 150 years, with the Expatriation Act of 1868, and now it’s up to every other country in the world to jump up and implement it in their domestic laws, the same way they jumped to implement FATCA. Get moving!

Like Loading...
« Declaration and Resolves for the Establishment of the First non-Continental Congress of Americans
Reminder: Why it is good to question what you are told by the tax compliance industry »