Q: Is your money safe with your bank?

A: No, your bank is safe with your money.

Below is the translation

The question is not if, but when the banking crisis occurs. And then the major banks have the right to take your life savings in order to save themselves and the financial system. The decision was clubbed through recently on the G20 and because of Sweden’s EU membership, Sweden must follow the directives.

The Swedish model had been clear.:When the Swedish banks have financial problems, the banks borrow Swedish state money. The system is called “bail out”. But this changed at the G20 summit in November last year. There was resolved on a new international standard for the world’s major banks. During a crisis, the bank is allowed to take their clients ‘capital, ie individuals’ savings accounts and pension funds, in order to save themselves — so-called “bail-in”.

The risk for savers is obvious, as you can read in the analysis alongside. The new system applies primarily to large banks with implications for the global economy, the so-called Global Systemi- Important Bank…………

And from Huff & Puff: 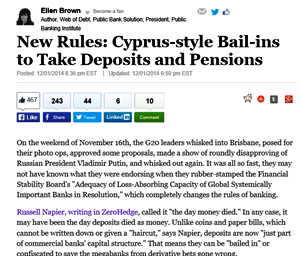 and “Timeline For “Bail-In” Of G20 Banking System”

This implies that the Dodd Frank and its revisions likely are the implementors.
(In order to implement evil–hide it in the boring.

“How did it happen?

How did we come to a place where an unknown, unelected body of bankers and bureaucrats — chaired since its inception by former Goldman Sachs men — has duped the G20 heads of government into endorsing a scheme to “bail-in” the insolvent private sector banking system by stealing the savings of taxpayers?”………..

If you want to keep your money safe: bank with us, at

34 thoughts on “Bail In’s Enacted at the last G20 meeting: “Banks may take your money to cope with crisis””