US-based financial journalist Emmanuel Olaoye (@emmanuelolaoye) recently wrote a blog post for Reuters entitled “Firms subject to U.S. FATCA advised to press on with preparing despite rule delay”. This is mostly an unremarkable pastiche of quotes from Tax-Industrial Complex FATCA cheerleaders of the type with whom we’re all familiar. But in the middle, it features this howler:

I can hardly think of a less neutral person to quote on the topic of how firms should make use of the time given to them by the latest FATCA delay, besides perhaps Carl Levin. Yet the editors over at Reuters are apparently happy with this anodyne description of Harvey which offers no hint to the reader of his conflict of interest. In reality, Harvey proudly characterises himself as a a FATCA “architect” and “insider” who flies all over the world to defend FATCA from the criticisms of ordinary people who are actually affected by it. People who are less professionally-invested in the success of FATCA have very different opinions on what firms should be doing over the course of the next year; indeed, some of them are calling for increased lobbying in order to kill the beast.

So yesterday (6 November) at around 10 AM I pointed this matter out in a comment:

J. Richard Harvey, who is quoted in the article, is not merely a “former senior advisor to IRS Commissioner Doug Shulman” but one of the architects of FATCA. Indeed he even refers to himself a “FATCA insider”. A first step towards objectivity in this article would be to make this fact clear.

More broadly, Mr. Olaoye in his capacity as a journalist should go beyond simply quoting the cheerleaders for FATCA and the compliance firms who are now doing a brisk business helping banks implement new systems to prepare for it, and include prominent voices of opposition in industry and academia such as James Jatras or Art Cockfield.

As of about 6 AM GMT on 7 November, Reuters has declined to publish my comment. 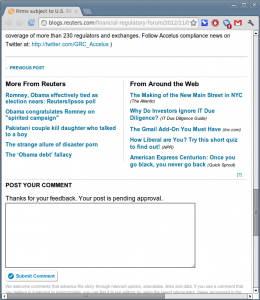 10 thoughts on “No, journalists, Dick Harvey is not a neutral source”